Miles, Mingus, Mozart and murder: A conversation with Howie Becker

When I read the lengthy profile on Dr. Howard Becker in a recent issue of The New Yorker, a few things stopped me cold. Writer Adam Gopnik said Becker played jazz piano (boogie woogie as a kid), became a world-renowned sociologist, wrote a book called What About Mozart? What About Murder? and lives in North Beach.

I was hooked. I had to meet this guy. One thing led to another, and then on a warm afternoon, I strolled up to his place to do just that. “Call me Howie,” he said when he met me at the door. And so I did.

He was born in Chicago in 1928. A bright, musical kid, by age 15 he was working as a piano player in bars and strip joints. He attended the University of Chicago, continued to play piano, taking lessons from iconic jazz pianist Lennie Tristano. Following college, with both an M.A. and a Ph.D. under his belt, Becker became an instructor, researcher, and academic writer, and later, a guru in that sometimes oversimplified, but arcane, subject, sociology.

Then in the 1960s, he moved to San Francisco and studied photography at the San Francisco Art Institute on Chestnut Street, not far from where he now lives. He worked with renowned photographer Annie Liebowitz, who was a lab monitor there at the time. By then an accomplished pianist, Howie accepted gigs in clubs like the Italian Village in North Beach.

Today he’s an accomplished jazz piano player. But his standing as a frequently controversial, but famous, sociologist overshadows that. Where did Howie Becker’s fame come from? It stems from his many lectures and books on such intriguing subjects as deviance. The question these lectures invite, and his books answer, is: Why are deviants deviant? He concludes “The social deviant lives by rules just as everyone else does.” In other words, “Deviance is not a quality of a bad person, but the result of someone defining someone else’s activity as bad.” He uses jazz musicians as an example.

“Jazz musicians see themselves as a different breed from those in their audience. They are cool. Their audience is square. This isolates them,” Becker says, “in a deviant culture. Therefore they are frequently labeled that way by society.”

In Paris, where Howie visits each year to lecture and to hang out, young Sorbonne-educated intellectuals adopted him and his sociologist theories about deviance. Students have even created a one-word, social subject for his beliefs: “Beckerisme.” They’ve elevated the bespectacled 86-year-old sociologist to a cult figure just as Parisian moviegoers adopted American comedian Jerry Lewis. The pratfall, rubber-faced Lewis is wound tightly and comes barreling at you like a freight train. The mild-mannered, even-keeled Becker is wound loosely. He almost sleepwalks through interviews, but suddenly will rattle off explosive concepts that light up the room.

So what do you talk about with Howie Becker who isn’t intimidating as I imagined he would be? Well, you talk about Miles Davis, Charles Mingus, Wolfgang Amadeus Mozart (Mozart and murder? I’ll get to that), Picasso, an array of jazz piano artists like Thelonius Monk, Bud Powell, and Howie’s mentor Lennie Tristano — and Ernest Hemingway.

After settling at a kitchen table and sitting across from me, Howie folded his hands, looked at me expectantly and waited. I jumped in:

E.B.: A while back I was enjoying a drink in a North Beach bar, and I met a young woman who told me she had just come back from Sun Valley. I told her that many years ago I worked in Sun Valley and met Ernest Hemingway there. She didn’t react to my revelation so I plunged ahead. “I admire Hemingway,” I said, “I reread him frequently just to tone up my ability to write a simple, declarative sentence.”

She responded by saying she would never, ever read Hemingway regardless of the simple, declarative sentences. She said he was a terrible man, a womanizer, a braggart, overbearing, he killed animals, and was an all-around bad person.

And that was the end of that bar conversation.

H.B.: That does seem to be a common opinion. Well, she was probably right, he was a terrible person. But does that mean he wasn’t a great artist? Everyone is responsible for what they do and how they act. But does that affect their genius? No, it does not.

Of course, this has implications for Woody Allen movies, Miles Davis and his music, Bill Cosby comedy shows, and other artists. The question is, Can you separate the artist from the art? Becker believes you can.

H.B.: Well, I was giving a lecture about deviance not being inherently criminal and abnormal when a colleague in the audience asked, “What about murder — isn’t that really deviant?” He thought he had me backed into a corner. I answered that reasonable people differ over whether certain killings are murder or justified homicide and these differences vary depending on what kinds of people did the killing. Similarly, some people think Mozart burst forth fully formed as a genius while others tell us that in Mozart’s time there were doubters.

E.B.: So there were plenty of people who didn’t believe Mozart was just a kid who wrote some good pop tunes.

Suddenly, I realized I was well into this Howie Becker interview and still hadn’t learned anything about sociology. Even though in school I never really got into algebra, physics, or logarithms, for example, I have a basic knowledge of what these arcane-to-me sciences can do in our tech-dominated world and why people study them. Not so with sociology. What’s it all about? What’s it good for? Why do students major in sociology in college? I majored in English because I thought someday I might want to teach English. Perhaps this is why students major in sociology, to be teachers.

E.B.: What does sociology do? What does it contribute?

H.B.: The services of sociology are to help people understand how social life works. Let me give you an example of how sociology can be useful. We talked about Hemingway and agreed that he was a master, worth reading. How did we come to that decision? We decided he was a learned experience. Many of us got together and held an election. We decided that Hemingway was a genius. This is how reputations get established. You said many of us listened to Gertrude Stein’s opinions about Hemingway or her opinions about Picasso. Many people believed her judgment. And I say yes, it was an election. People want to be able to point at something — some evidence that shows that they are right. Hence, Picasso is great. Mozart is great. Miles Davis is great, Charles Mingus is great.

E.B.: There’s a movie called Big Eyes, about the kitsch pop painter Walter Keane who passed himself off as an artist who painted woeful children with huge, saucer eyes. He said he was more popular than Picasso.

H.B.: But more people believe in Picasso than in Walter Keane. Even though Keane may have said he was more popular than Picasso, he wasn’t.

After agreeing that Walter Keane was only a footnote — if that — in the art scene, we turned to something high in the 24-hour news cycle — marijuana.

E.B.: Howie, smoking marijuana doesn’t make you a deviant, a weird person, does it?

H.B.: Social interaction plays a role in the use and enjoyment of marijuana. I argued and was quoted in The New Yorker that you had to learn how to get high. Smoking weed, I said … was most often strange or unpleasant … the beginner will not continue use unless he learns to redefine the sensation as pleasurable. … This redefinition occurs, typically, in interaction with more experienced users.

NEARER MY GOD TO THEE

So there are no absolutes. Everything is a learned experience; everything is relative. It was getting late in the afternoon. There were shadows on the street.

It was time to go. Howie got up to usher me out. In doing so he walked past a black, upright piano, sat down and began playing “Nearer My God to Thee.” An unlikely tune I thought, but in the second chorus, Howie added a gentlemanly modicum of swing. And that was that. 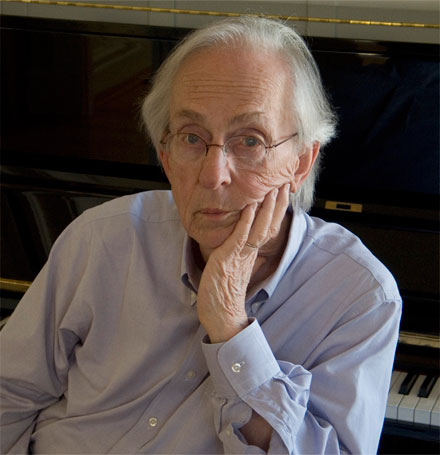