‘Monet: The Late Years’ opens at the de Young

During the years 1913 until his death in 1926, Claude Monet explored an increasingly vibrant abstract painting style originating from the gardens he cultivated around his home in Giverny. Monet is known as the greatest landscape painter of the Impressionist group, and this exhibition will be the first in more than 20 years to focus on the final phase of his career. Sixty paintings, including more than 20 examples of Monet’s water lily paintings, along with some less familiar rarely seen works, tell the story of the artist’s later years. Several paintings will be seen for the first time in the United States.

Broader applications of paint and the resulting increased abstraction of his canvases were in some ways a circumstance of Monet’s deteriorating eyesight. While ensconced in his Giverny gardens, his personal loss and the threat of surrounding war led to this reinvention and a trend toward more introspective imagery. Limitations create alternate possibilities, and the adversity of Monet’s cataracts created a new way of seeing in works like Path under the Rose Arches. In this painting, the canvas explodes in swirling pigment as dappled light penetrates the arch of blossoms overhead.  These paintings seem to be ancestors to modern abstract paintings reminiscent of early Jackson Pollock. This approach continues in Wisteria and The Artist’s House Seen from the Rose Garden, in which the subject matter dissolved into heavy, wide, brightly colored brushstrokes. 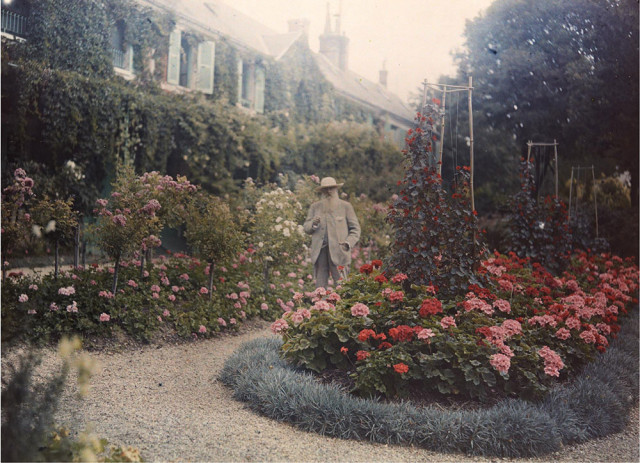 Detail of Anonymous Monet in His Garden at Giverny, 1921, Autochrome; Image courtesy of the Fine Arts Museums of San Francisco

The exhibition is arranged thematically, opening with paintings from the late 1890s and early 1900s, and includes those of the Japanese footbridge installed over Monet’s newly created lily pond and house, the future sources of his inspiration. The next period, between 1914 and 1919, takes the museumgoer to Monet’s return to painting after a hiatus following the death of his wife, Alice, and his son Jean. Water lily paintings from this period, juxtaposed with large-scale floral studies from the evolution of his garden, illustrate his ongoing studies of the natural world. Works such as Day Lilies, Agapanthus, and Yellow Iris in addition to Water Lilies are among the 20 paintings on loan from the Musée Marmottan Monet in Paris.

Next, the exhibition explores Monet’s ambitions as a muralist. After 1916, the artist began to work in a vast studio building constructed to house his ambitious, large-scale work. Some of these canvases, measuring between 14 and 20 feet wide, formed a series of mural-style paintings now known as the Grandes Decorations. Agapanthus, on loan from the St. Louis Art Museum, measures more than 6 by 14 feet — the expanse of which creates an immersive viewing experience. 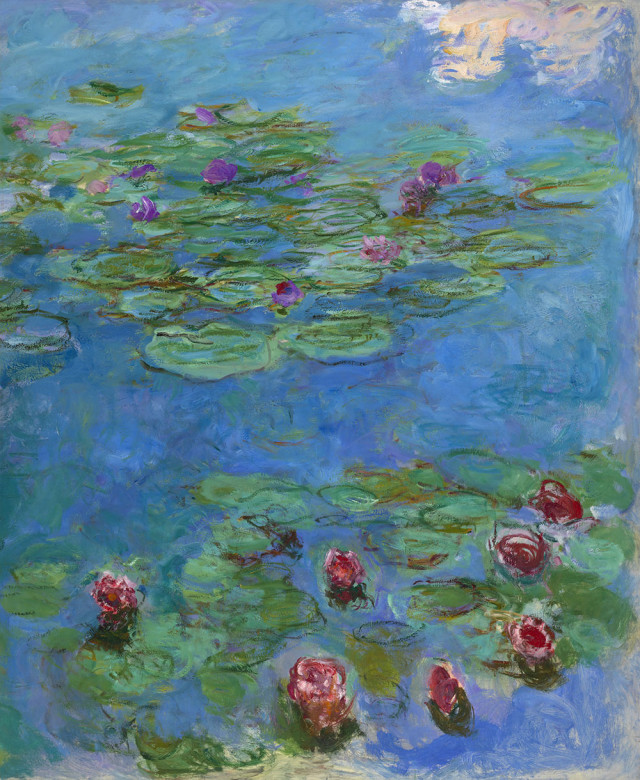 The exhibition concludes with paintings from Monet’s late garden series, several on view in the United States for the first time. Here, we find Monet returning to smaller panels on the scale of his famous series paintings from the 1890s and early 1900s. He returned to the familiar motifs on his property, including the Japanese bridge and the rose-covered trellises. The most distinctive aspect of “Monet: The Late Years” is this showcasing of late period works in greater numbers than ever before attempted. These include seven studies of the Japanese bridge at Giverny, and six portrayals of a tree with a twisted trunk and gnarled branches.  Also included is Weeping Willow, a painting from 1918–19 that mournfully represents the fallen French soldiers of World War I.

After his death in December 1926, Claude Monet’s house and garden were eventually renovated and opened for tourists and remain a major international travel attraction in Giverny. The constraints of old age, sickness, and grief can impose the sense that possibilities for personal achievement are narrowing. Monet’s late paintings exist as a kind of rebellion against personal challenges that could have easily turned into self-pity and resignation. Like Beethoven composing music after his hearing had failed, great artists help us understand that creativity transcends the limits of the human condition and proves that we are not defined by our circumstances.

Sharon Anderson is an artist and writer in Southern California. She can be reached at www.mindtheimage.com
Tweet
Send to a Friend Print