In the de Young’s first exhibition dedicated to the work of Paul Gauguin, Gauguin: A Spiritual Journey explores the work of the artist as it relates to his personal relationships and his search for spirituality. Eugene Henri Paul Gauguin was a key member of the post-Impressionist era of painters along with Paul Cezanne, Vincent Van Gogh, and Georges Seurat. Known as an explorer of inner and outer worlds, Gauguin’s non-naturalistic use of bold color and flat, stylized shapes seem to reflect the rich interior life of his subjects. Reclining Tahitian Women (1894) shows women in repose, seemingly lost in thought on a bed of violet and pink shapes that symbolize shade cast by a tree. A more traditional still life painting, Flowers and Cats (1899) offers a subtler version of Gauguin’s painting talents — still with the signature flattening of space and vivid color pallet in the lively orange flowers against a wall painted more like a sunset than an interior. 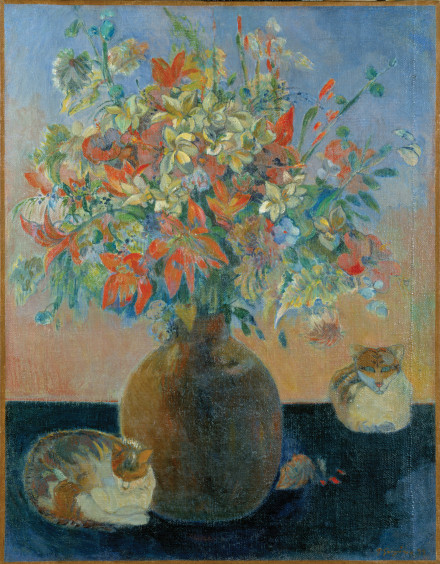 Adventure and exploration also came in the form of collaboration and travel. Collaborations with Van Gogh and Emile Bernard furthered Gauguin’s experiment with flattened fields of vibrant color and dark outlines that later influenced painters like Pablo Picasso and Henri Matisse. This exhibition progresses from early (ca. 1873) drawings of his wife, Mette Gad, to well-known works inspired by his travels to Tahiti.

Among Gauguin’s painting subjects are people believed to be indigenous Mahu or Tahitian “third gender” individuals. In Samoa, the term Fa’afafine is an equivalent term for a queer minority considered to be gifted in the spirit of more than one gender. Artist Yuki Kihara was commissioned to create a video work that will debut with this exhibition. Filmed in Upolu Island Samoa, her piece entitled First Impressions: Paul Gauguin shows a group of Fa’afafine friends discussing works that Gauguin created during his time in the Pacific.

More than just paintings, this exhibition features 15 of Gauguin’s experimental ceramics and elaborate wood carvings along with period photography and his letters and writings. Included among the woodcuts is Femme cueillant des fruits et Oviri (Woman Picking Fruit and Oviri), (1896-97). In a daring and forward-thinking approach to composition, a bold white highlight bisects the woodcut’s visual field, which tells the story of a woman picking fruit among dark trees with a haunted figure in the foreground, cropped at its left eye, regarding the viewer. Stylized shapes and dreamlike subjects continue as a theme in Woman with Mango Fruits (ca. 1889), a carving in oak painted in festive colors. A smiling woman picking mangoes sits in the middle of a darkened, lush jungle surrounded by mischievous grinning monkeys as disembodied heads of women who may represent spirits look on.

Highlighting the artist’s time spent in the Pacific region en route to Tahiti in 1895, carvings and images from New Zealand, The Marquesas Islands, and Tahiti will be on view from Fine Arts Museums of San Francisco’s own holdings in the Oceanic arts. Cristina Hellmich, curator in charge of the Arts of Africa, Oceania and the Americas at the FAMSF says, “I am pleased we can highlight some lesser-known aspects of his life, including his wife’s critical role in his career, and offer contemporary perspectives through a new video installation.  The striking works of Maori, Marquesan, and Tahitian art from our own collection will allow visitors to learn about Gauguin’s fervent interest in the art and spirituality of Oceania.” Tekoteko (gable figure) of Ko Tuwhakairiora, (ca. 1880) is part of the FAMSF’s permanent collection. Made from wood, abalone shell (paua), and human hair, the work is a good example of the stylized figurative sculpture in New Zealand. There’s a clear connection of influence between the abstract human figure carving with its hard, graphic lines and Gauguin’s approach to his own art.

Assisting in the presentation of Gauguin’s work in a new, contemporary context was the exceptional partnership with the Ny Carlsberg Glyptotek in Copenhagen.  Containing one of the world’s finest holdings of Gauguin’s works, The Glyptotek collaborated with the FAMSF to bring together more than 60 Gauguin works on view.