‘Predicting the Past:  Zohar Studios, The Lost Years’ at the Contemporary Jewish Museum

The Contemporary Jewish Museum presents an immersive photography installation by Los Angeles-based artist Stephen Berkman. Shimmel Zohar was a 19-century Jewish immigrant and photographer who founded Zohar Studios in New York City. The exhibition is a tribute to Zohar and his studio; the name Zohar also referring to a collection of writings that form the basis of Kabbalistic study. As an esoteric method, the mysticism of the Kabbalah is echoed in Berkman’s approach to his subjects and their subtexts, obscurities, and tangents.

THE PHOTOGRAPHIC PROCESS THROUGH TIME

Raised in the Bay Area, Berkman also creates historical photography for large-scale Hollywood films and documentaries, including The Assassination of Jesse James by the Coward Robert Ford and Cold Mountain. His obsession with Victorian culture has made him an expert at the extremely difficult chemical photographic process known as wet collodion.

Invented in 1851, the process was respected for the level of detail captured in the final photo. One side of a glass plate is coated with ether, grain alcohol and nitrate cellulose, at which point the plate is dipped in silver nitrate. Exposed to light while still wet, the image must be developed and fixed immediately after making the exposure. A later alteration to the process in which an underexposed negative backed with black paper or fabric — an abrotype — became popular as did the same process backed with lacquered metal, known as a tintype. 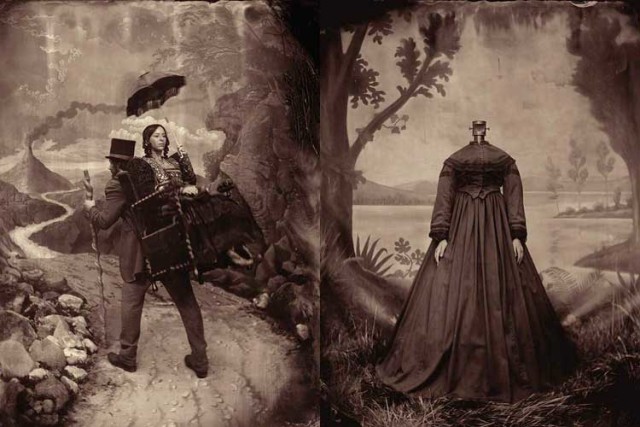 THE PAST AS PRESENT

Berkman, who has worked with the wet collodion process since 1997, has also been working on the Zohar Studio project for more than 20 years.

“I appreciate the visual code of the nineteenth century, the formality of it, the way things looked, and the mix between art and science,” says Berkman. “What intrigues me is getting inside the minds of people from another time and feeling that their time, what we now consider the past, was at one time contemporary. We are both the beneficiaries and victims of history.”

This exhibition presents more than 30 intriguing photographs addressing both Jewish life and the state of scientific understanding over 150 years ago. Richly hued and dynamic in their precision and execution, the photos characterize a range of dreamers, eccentrics, and malcontents embellishing upon the conventions of 19th-century studio photography.

The titles of the work, steeped in ambiguity, create the idea of a broader story and mystery. A Wandering Jewess depicts a stern-faced woman carrying an umbrella, sitting on a chair strapped to the back of a man embarking on a journey down a winding road toward what looks to be an active volcano. Conjoined Twins shows identical twins linked only by a shared handlebar mustache stretching between them. The Absent-minded Soothsayer squints with one eye looking forward, and as a soothsayer, possibly into the future. We are left to wonder why he is absent minded as he clutches a bugle and points a finger heavenward. In a lush jungle setting, The Songbird and the Sharpshooter has in its center a hirsute hunter staring into the middle distance, a bird perched on his index finger. The grandiose background and costuming hearkens back to a time when a photographic portrait was an event in which the setting and presentation was meticulously orchestrated in advance.

Nods to Surrealism emerge in photos like Obscura Object as a Victorian model poses in front of a painted backdrop, her head seemingly decapitated and replaced by a diminutive mechanical prop. The narratives become more arcane in works like Remedy for Reverie, revealing a female figure trapped in a formless black fabric gown, mechanized by her connection to a moody backdrop via a tubing attached to a kettle.

The exhibition is accompanied by a 368-page catalog created by the artist and containing annotations for each photograph, a chapter on the studio, and a specially commissioned afterword by acclaimed writer Lawrence Weschler.

“Berkman’s work falls into the tradition of the artist-made museum, much like the famous Museum of Jurassic Technology in Los Angeles by the artist David Wilson,” says Lori Starr, executive director, the Contemporary Jewish Museum. “It’s a fascinating art practice that moves beyond binary questions of a fact and fiction. We are so pleased to be presenting Stephen’s first exhibition in a museum setting.”