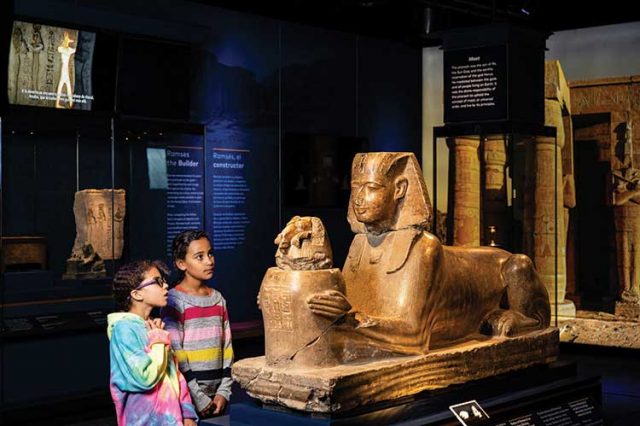 Installation view of “Ramses the Great and the Gold of the Pharaohs.” Photo: World Heritage Exhibitions
by Sharon Anderson

The Fine Arts Museums of San Francisco is hosting an exclusive West Coast presentation of the international touring exhibition “Ramses the Great and the Gold of the Pharaohs.”The story of one of the most legendary rulers in world history — Ramses the Great — is told through 180 spectacular objects related to his 67-year reign, many of which have never before left Egypt.

As the third pharaoh of the 19th dynasty, the distinguished military officer Ramses II (known as Ramses the Great) is regarded as one of the most powerful and celebrated leaders of the New Kingdom, a period when Egypt was a wealthy and powerful empire. Ramses expanded public monuments and construction projects, including reliefs depicting Egypt’s victory in battle. During his reign he erected many temples, obelisks, and statues echoing the opulence of the era.

In this first exhibition about Ramses the Great in more than 30 years, statues, sarcophagi, masks, jewelry, and ornate golden tomb treasures show not only the wealth of the pharaohs but also the formidable skills of the ancient Egyptian tomb builders and artists. Included are recently discovered animal mummies, including cats, lion cubs, and even a mongoose from the Saqqara necropolis. Treasures from the royal tombs in Dahshur and Tanis, many of which have never traveled to the United States before, will also be on view.

RICHES FROM THE TOMBS

Gold and silver objects from royal tombs span from the Middle Kingdom (12th dynasty), about 600 years before Ramses, and of the 21st and 22nd dynasties, about 200 to 300 years later. Located in the Valley of the Kings, Ramses the Great’s tomb was plundered in ancient times, and objects from royal tombs in other parts of Egypt illustrate the kind of extraordinary artifacts that Ramses’s tomb would have likely included.

Among these objects are the falcon-headed collar and counterweight of Princess Neferuptah. Six rows of beads are linked on either side by twin golden headed falcons leading to a counterpoise of beads also bearing a smaller gold falcon head. The falcon symbolizes the Egyptian deity Horus, representing kingship and the sky.

This iconography is echoed on the lid from the hawk-headed coffin of Sheshonq II. The silver sarcophagus from the 22nd dynasty takes the shape of Osiris, god of the underworld, but with a hawk’s head. Winged gods are carved into the body, as are the four sons of Horus. The hands hold the crook and flail, symbols of royalty, power, and authority. Four miniature silver sarcophagi were found, each with one of the king’s internal organs, although these were represented with human heads.

Created out of gold, alabaster, and glass, the striking funerary mask of Wendjebauendjed will also be on display. An Egyptian general and priest of the 21st dynasty, the general’s face is idealized and detailed with a slight smile.

Notable is the head of a colossal statue of Ramses II from the 19th dynasty, created of red limestone and measuring over 90 inches high with an elongated headdress in the style of Osiris, representing death and resurrection. Another 19th-century limestone fragment torso and head of Ramses II shows the king with a cobra-shaped diadem on a traditional headdress.

This once-in-a-lifetime exhibition is in partnership with the Supreme Council of Antiquities of the Arab Republic of Egypt and is sponsored by World Heritage Exhibitions. World Heritage Exhibitions President John Norman explains, “Visitors will not only see priceless historical artifacts but can also transport themselves to Egyptian temples in an electrifying virtual reality journey across the sands of the Sahara Desert.” Once this exhibition completes its tour, the objects will return to Egypt where they likely will not travel again for decades.