Rauschenberg erases the rules at SFMOMA

Through March 25, 2018, SFMOMA presents the West Coast exclusive of Robert Rauschenberg: Erasing the Rules. As one of the heavyweights of contemporary art, Rauschenberg expanded the possibilities of what defines art through his prolific career reshaping and redefining painting, sculpture, silkscreen, assemblage, collage, performance, prints, and photography.

Rauschenberg erased more than just the rules. The theme of the exhibition centers around his Erased de Kooning Drawing Robert Rauschenberg (1953). The painter Willem de Kooning allowed the younger up-and-coming artist to visit his studio. The goal was to get a de Kooning drawing and erase it. Knowing this would be the end result, de Kooning gave Rauschenberg a drawing heavily covered in pencil marks that ended up taking the artist months to erase. De Kooning knew what his erased drawing represented: It marked the end of an era, the changing of the guard in a sense, and the transition from traditional abstract expressionism to the beginning of Neo Dada and assemblage art.

Formerly at the Tate Modern in London and the Museum of Modern Art in New York, the exhibition pays tribute in its San Francisco presentation to SFMOMA’s special relationship with Rauschenberg. The museum hosted his first retrospective in 1976 organized by celebrated curator Walter Hopps. Organized chronologically, the multidisciplinary artist spent time at Black Mountain College, where he undertook his first significant collaborations with Susan Weil, Cy Twombly, John Cage, and Merce Cunningham. He continued to work and travel with Twombly in North Africa and Italy, and eventually set up a studio in lower Manhattan where he began to work closely with Jasper Johns. Some key works from his later years in his Florida studio are also included in this exhibition.

Highlights include rare glimpses of Rauschenberg’s legendary combines including Monogram (1955-59), possibly the best-known stuffed goat in art, with a tire around its middle, standing on its painterly platform quietly confounding the viewer. The combines challenge the museumgoer’s point of view because painting and sculpture merge in new ways. Automobile Tire Print (1953) is part of SFMOMA’s permanent collection. Rauschenberg instructed the composer John Cage to drive his Model A Ford through a pool of paint, after which he drove across 20 sheets of paper. The sound-activated work Mud Muse (1968-71) is the artist’s construction of an enormous vat of vigorously spurting and bubbling mud. This was originally created for an exhibition in Los Angeles and was inspired by a hydrothermal basin in Yellowstone National Park. The SFMOMA exhibition marks the work’s first return to California since 1971. 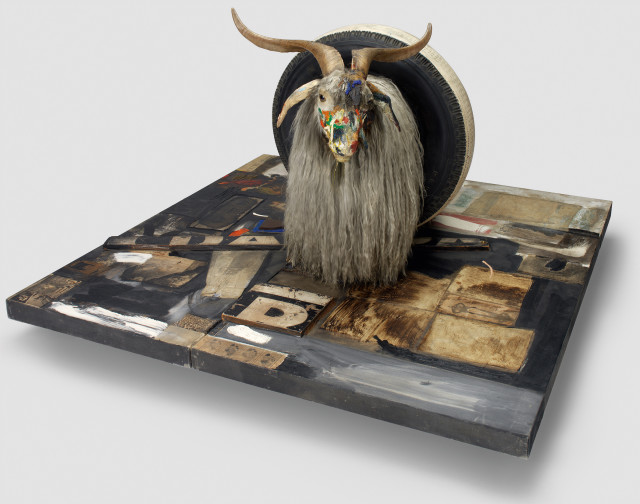 Challenging tradition with innovation and humor, Robert Rauschenberg traveled, collaborated and interacted with his world, bringing those experiences, found objects, and inspirations back into his studio to reassemble and recreate art objects that would define his time.

Tweet
Send to a Friend Print
Sharon Anderson is an artist and writer is Southern California. She can be reached at mindtheimage.com.