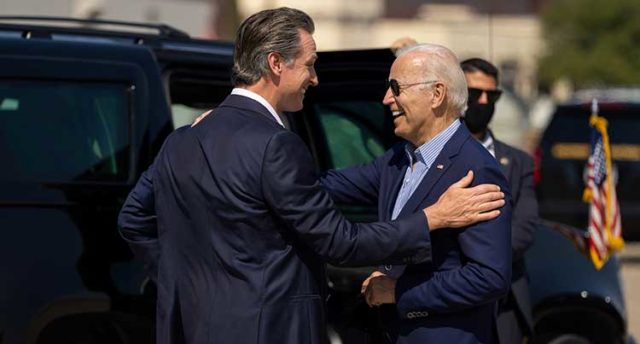 Governor Newson is already generating talk of his succeeding President Biden in the White House. Photo: The White House
by John Zipperer

Several months ago, I received a press release from one of the candidates in the gubernatorial recall, in which she bragged about her performance. Most politicians brag; what made hers noteworthy is that she received 3 percent of the vote but nonetheless declared she “is the winner” because she spent less per vote than Gov. Gavin Newsom, who won by a massive landslide. Now you know why we give participation trophies to grade schoolers.

Post-recall, state voters were rewarded with a reenergized governor, and we got the heart-warming experience of having New York copy California. After Newsom announced he was preparing a bill that would let private citizens go after the manufacturers and distributors of assault weapons and ghost guns, New York Attorney General Letitia James said she would do the same thing in her state.

Observers are not sure if Newsom seriously thinks this is a good plan or if he’s doing it to troll Texas, which started the fad by deputizing citizens to go after anyone who “aids or abets” a Texas abortion after six weeks of pregnancy. Maybe both? On Dec. 11, he tweeted, “SCOTUS is letting private citizens in Texas sue to stop abortion?! If that’s the precedent then we’ll let Californians sue those who put ghost guns and assault weapons on our streets. If TX can ban abortion and endanger lives, CA can ban deadly weapons of war and save lives.”

MR. MOJO IS BACK

I’m reminded of a Molly Ivins quote from the 2000 election debacle: “These Gore people have no idea how to steal an election. What happened to the Democrats? They used to have some skill at this.”

They don’t need to steal elections, but they should fight for them tooth and nail, because the alternative is pretty grim these days.

Luckily, Newsom is acting like he’s found his groove, and some journalists are already mentioning him as presidential material. It’s premature to predict he’ll be the country’s first Generation X president, but for now Newsom is displaying some of the uncanny talents that took him from the Board of Supervisors to the governor’s mansion (which, um, he doesn’t live in).

We got a taste of those skills during the Trump years, when he showed himself able to thrust and parry fearlessly with the president on Twitter, but then also work with him to get the state some federal help for wildfire destruction.

But back to the deputizing-citizens-to-enforce-laws bit — it likely will get thrown out by the courts at some level, but it will still have served at least two purposes. First, Texas’s abortion gambit will also be a legal casualty. Second, it elevates the issue of gun violence.

As I noted here last month, Newsom also has come out forcefully against the well-publicized brazen acts of crime in the state. A little later, Mayor London Breed joined in, announcing plans to crack down on the open-air drug dealing and usage in the Tenderloin, and to expand the ability of the police to use surveillance video.

“It’s time that the reign of criminals who are destroying our city — it is time for it to come to an end,” said Breed. “It comes to an end when we take the steps to be more aggressive with law enforcement … and less tolerant of all the bulls–t that has destroyed our city.”

If she follows up with both tough actions and some of the reform-minded solutions popular on the left, she has the opportunity to build a bridge between police reformers and the people in the Tenderloin who want to be able to walk their kids to grade school without maneuvering through gang-run open-air drug dens.

Through gritted teeth, the Board of Supervisors approved Breed’s declaration of an emergency in the Tenderloin, but only after making it achingly clear that they thought it was wrong to use police to make the neighborhood safer for the people living there.

We do need to recognize that the Tenderloin is not going to become a squeaky-clean neighborhood. Jesus said, “The poor you will always have with you,” which was translated into the vernacular by Newsom years ago when he was mayor and was asked about the Tenderloin’s challenges. He said the neighborhood has a high concentration of the poor along with drug users and the mentally ill. Also, the services to help those residents are all nearby. Good luck finding a bunch of other supervisors to plead with the mayor’s office to move SROs and services for substance abuse into their districts.

Maybe next year the supervisors’ resolution can be to solve more problems and do less performative virtue-signaling.