The legendary surrealist painter René Magritte will be the subject of a retrospective of his late work at SFMOMA. More than 20 artworks will be shown for the first time in a U.S. museum concentrating on the artist’s sunlit surrealism period.

In the 1940’s, Magritte found himself transitioning from his established style. Part of this transformation was due to the instability in German-occupied Belgium as well as his rebellion against the traditional rules of other surrealist painters. The Fifth Season begins in this time period when the artist began what became known as his “sunlit” period, which lasted until 1947. These paintings, in harder, duskier tones than his prior work, appeared shocking with references to 19th-century masters such as Pierre-Auguste Renoir verses the popular harder-edged surrealism of painters like Giorgio de Chirico. The “vache” paintings were a shorter-lived series during which Magritte explored colors and aesthetics that bore an affinity to Fauvism and Expressionism.

The exhibition is sorted room-by-room by theme. The Human Condition, paintings conspicuously about paintings, presents five artworks that exemplify Magritte’s approach to painting as problem solving. In paintings like Where Euclid Walked (1955), Magritte paints scenes where the background merges with the foreground to create astonishing illusions that question our understanding of inside and outside, real and unreal, the natural and artificial. In the 1950’s, Magritte’s Hypertrophy series played with the exaggerated scale of everyday items. Personal Values (1952), a bedroom with cloud-covered walls depicts bedroom furniture that appears diminutive compared to a giant comb and shaving brush eclipsing the rest of the room. The perplexing, even jarring tension and contrast, taps into feelings of unease and alienation still felt in postwar Europe.

Some of Magritte’s best-known later works are the Bowler-Hatted Men, variations on a recurring motif he painted from 1926 to 1966. The exhibition has numerous examples, including The Son of Man (1964), where a green apple impossibly levitates over a man’s face, and The Happy Donor (1966), a ghostly outline of a night scene in the shape of a man who stands in front of a wall and flattened background. 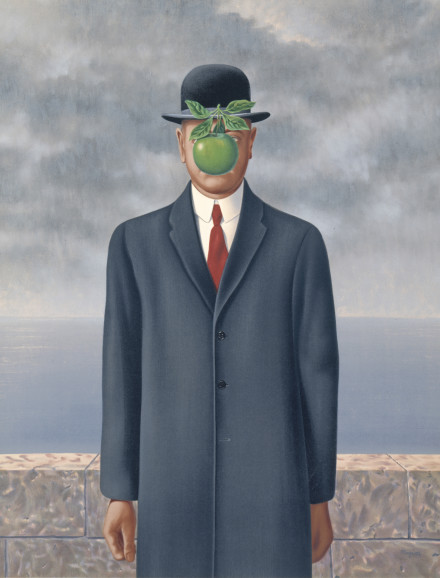 Another unique attraction in this exhibition is four of the eight rarely seen canvases from The Enchanted Domain (1953), Magritte’s epic 360-degree panorama and his largest work. This mural measures 236 feet in circumference and was commissioned for a circular room in the Grand Casino in Knokke, Belgium. SFMOMA’s presentation marks the first time in 40 years this many painting panels that comprise The Enchanted Domain have been seen together in a museum.

The final gallery explores themes of gravity and light in paintings that render gigantic floating boulders and flying birds framing the sky. As an examination of our basic assumptions of perception and existence, René Magritte: The Fifth Season marks the 50th anniversary of Magritte’s death and will be shown exclusively at SFMOMA.