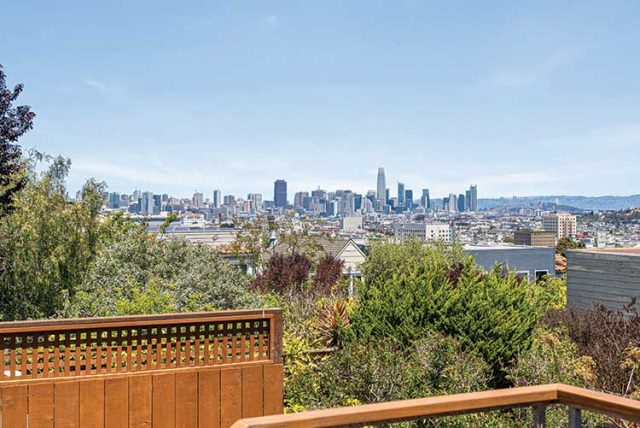 Is it dusk or dawn for the San Francisco real estate market? Photo: Upsplash / infiniteviewsllc.com
by Garey De Martini

The San Francisco Bay Area led the country in economic growth in 2022, with a 4.8 percent increase in GDP, according to a new report from the Kenan Institute of Private Enterprise. Sounds pretty good, right?

That is until you read that the tech sector accounted for most of this growth, and some of the biggest names in technology just announced layoffs.

There’s simply a steady stream of mixed signals. The U.S. GDP accelerated at a better pace than expected in the third quarter. Is there light at the end of the economic tunnel? Don’t get your hopes up, say economists.

Inflation is down, so that’s good, isn’t it? Yes, but still high. And the Fed is likely to raise rates again to combat it.

Matt Fuller, cofounder of Jackson Fuller Real Estate and a past president of the San Francisco Association of Realtors, summed it up this way when describing the vibe in real estate today: “Everyone knows something is happening, and absolutely no one knows what that is. Inventory. Interest Rates. Layoffs. Remote work. Empty downtown. State housing elements. Supervisors.”

He added with a smile, “Destination unknown, full speed ahead!”

Fuller believes the 2022 real estate season wrapped up early, and separating signal from noise for the rest of the year is likely a fool’s errand. He has been attending industry events recently, and says that his takeaway is real estate’s best and brightest economic thinkers have landed on one consistent theme: Nobody knows what’s ahead.

Locally, realistic buyers and sellers are making deals happen. Most, however, are choosing to sit on the sidelines, hoping to time the market, expecting to make their move when conditions become more favorable for them.

In the middle of November, SocketSite reported on the large number of homes for sale in San Francisco. Inventory levels were effectively at a 12-year high on a seasonally adjusted basis, save for when the market was frozen in 2020 due to the pandemic.

What’s more, in November more than 40 percent of the homes on the market in San Francisco had reduced their asking prices at least once, which was the highest percentage of reduced listings since the fourth quarter of 2011.

Homes priced at $3 million and above, and condos, are in general having the hardest time selling at this point.

Ted Andersen of the San Francisco Business Times said in a November article that some of San Francisco’s most recent condo developments still have many unsold units after sales failed to tick up during the third quarter — a time when inventory and sales expectations rise each year.

“While large downtown condo towers such as the 392-unit Mira (280 Spear Street) and the 298-unit Harrison (401 Harrison Street) have filled up, others have fallen far short,” he wrote for the Business Times. “For example, the Serif at 960 Market Street, delivered last year, has only sold just over 50 of its 252 units. Likewise, One Steuart Lane has sold 40 of its 120 units.”

High interest rates are blamed for some of this buyer reluctance. Completely understandable. But there is a saying in the business that might resonate for some potential buyers: “Marry the house and date the rate.”

The idea is you purchase a home regardless of what the rate is, with plans to refinance later. The home is the keeper; the mortgage rate is not. This strategy has worked well in the past, but of course, there are no guarantees going forward. Never overextend yourself, as it might take a long while for rates to come down.

But if you find something you like, and if you’ve got the money, maybe mortgage rates shouldn’t get in the way.

Fuller wanted to talk about one thing that no one seems to be discussing. He believes San Francisco’s inclusionary housing program is profoundly broken. He argues that city officials are building a new class of housing that isn’t market rate, isn’t rental, and may be a disaster for owners thinking they will come out better off than if they had just rented.

Fuller thinks part of the problem is all the red tape involved with the program. Economic headwinds make the real estate market scary enough, but problems with this well-intentioned but possibly flawed “Below-Market-Rate Program” make it sound even scarier. Especially for those already having a hard time making ends meet in the city.