‘Soul of a Nation’ comes to the de Young

The acclaimed “Soul of a Nation: Art in the Age of Black Power” opens at the de Young on Nov. 9, 2019 and continues through March 15, 2020. Featuring more than 150 works by over 60 artists, key historical events  and cultural movements within the black community are brought to life through a diverse grouping of painting, sculpture, photography, and political publications.

A FIGHT FOR EQUALITY

Using 1963 as a starting point, marking the March on Washington and the height of the Civil Rights Movement, artists fighting for equality and justice created imagery promoting that solidarity and resistance to oppression. Images of political figures as beacons of leadership come to life in John Outterbridge’s About Martin (1975) depicting Dr. Martin Luther King Jr. and Wadsworth Jarrell’s Black Prince (1971), which presents Malcolm X, his head, shoulders, and hands composed of brightly colored words from his speeches and writings. Melvin Edwards, Curtain for William and Peter (1969/2012) evokes the violence and subjugation of slavery and racial violence. On the other side of the spectrum is Barkley L. Hendricks’s What’s Going On (1974) — named after the Marvin Gaye album — which is a striking, stylized portrait from one of the finest figure painters of his generation. The monumental elegance and clean lines of his figures never speak of protest or a race in crisis. 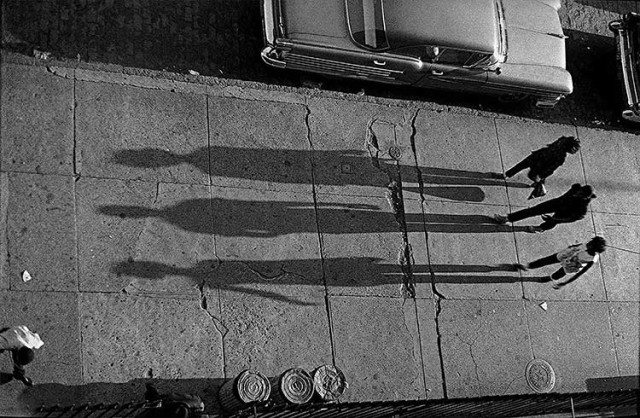 Artists of color, having a difficult time finding gallery representation, formed their own galleries and group shows in public spaces. The Spiral Group, spearheaded in 1963 by Romare Bearden, Charles Alston, Norman Lewis, and Hale Woodruff, mounted a group exhibition in 1965 committed to works in black and white only. Lewis said, “Our group should always point to a broader purpose and never be led down an alley of frustration. Political and social aspects should not be the primary concern; esthetic ideas should have preferences. Is there a Negro Image?” From 1967 to 1971, the Visual Arts Workshop of the Chicago artists collective Organization of Black American Culture painted The Wall of Respect, a celebratory mural on the city’s south side featuring images of black heroes and icons and inspired similar murals across the country.

USE OF FOUND OBJECTS

The Black Power and Black Arts movements are represented by several works highlighting inequality and injustice. The activist Stokely Carmichael first pronounced the rallying cry of “Black Power!” during a 1966 speech at the Mississippi March Against Fear. The phrase became a call to arms and a declaration of refusal to continue to tolerate racial violence. Part of this exhibition is dedicated to the responses to the Watts riots in 1965.

Dana C. Chandler Jr’s. Fred Hampton’s Door 2 (1975) commemorates the murder of Black Panther Fred Hampton with a bright green and orange painted door riddled with bullets. Using an actual door, the sculpture recreates the revolutionary activist’s death by gunfire when the Chicago Police Department raided his home, a raid legitimized with a warrant for illegal weapons though the motive to remove a powerful Black Panther Party leader was believed to be the more plausible cause for his assassination.

“The powerful and provocative artworks on view in ‘Soul of a Nation’ offer eloquent testimony regarding the singular power of art to confront might with right, to empower individuals and communities, and to inspire cultural pride and solidarity,” said Timothy Anglin Burgard, curator in charge of American art at the Fine Arts Museums of San Francisco. “The core messages and meanings of these historical works retain their contemporary relevance and resonance, showing how far the nation has progressed, but also how many important issues still remain unresolved,” he said.

The themes in “Soul of a Nation” provoke reflection in the viewer to consider how far we have come as a culture, the ground both lost and gained in the ongoing battle for equality, and the work that still needs to be done.