There’s an ill-conceived notion that nothing happens in the city during the summer because everyone is on vacation. Even if that were true, there are still others coming to visit San Francisco, in spite of all the bad press of late, and they’re doing more than just walking across the bridge. The truth is, there’s never a shortage of things happening in the city, so as the summer winds down and the kids head back to school, take some time to enjoy these last few days of summer, with plenty still happening outdoors.

Here is just a sampling of this month’s events:

“Free” and “outdoors” are two words that fit together nicely, so head out to Stern Grove for the final two concerts of the season: first, the post-punk icon The Psychedelic Furs and folk-rock James; then, the ever-popular, jazzy-swingy Pink Martini and local global swing of Bario Manouche (Sunday, Aug. 4 and Aug. 11; sterngrove.org). … In between the two, head down to Union Square for some American roots and folk tunes by Moonalice (Wednesday, Aug. 7;
unionsquarelive.org). There’s music there throughout the month on Wednesdays and Sundays from Hawaiian to chamber to blues. … SFJazz is one of the city’s best musical assets and never disappoints with programming — the Preservation Hall Jazz Band (Thursday–Sunday, Aug. 8–11; sfjazz.org) performs two dance floor shows for five days with special guests. … Outside Lands (Friday–Sunday, Aug. 9–11; sfoutsidelands.com) lands again in Golden Gate Park always with an impressive lineup; headliners this year include Paul Simon, Childish Gambino, Twenty One Pilots, and many others, including over a dozen comedians. Here’s good music for good: Grammy Award-winning singer-songwriter Jason Mraz performs a benefit concert for the homeless advocacy group Harmonic Humanity at The Fillmore (Saturday, Aug. 17; thefillmore.com). … Missing opera? You won’t want to miss the graduates of the esteemed Merola summer program perform a variety of arias and ensembles at the Merola Grand Finale (Saturday, Aug. 17; merola.org)

If you didn’t make it over to the Presidio last month for the Stargazing Party, here are two more opportunities to view the summer starlit skies, provided they are fog-free, of course: the City Star Party at Point Lobos (Thursday, Aug. 8; sfaa-astronomy.org) and the Perseids Meteor Shower (Sunday–Tuesday, Aug. 11–13; earthsky.org). The Perseids leave consistent trains and are best viewed in the northern sky from midnight to dawn, when they peak.

There’s also still time to take in “100 Days of Summer” at the Exploratorium for special programming and interactive exhibits, and while you’re there, explore your identity and what makes you you in “Self Made: Exploring You in a World of We” (daily through Sept. 2; exploratorium.edu). … For more on identity, head over to the California Academy of Sciences for “Skin: Living Armor, Evolving Identity,” where you can learn about how skin forms a living interface between organisms and their environment (daily; calacademy.org). 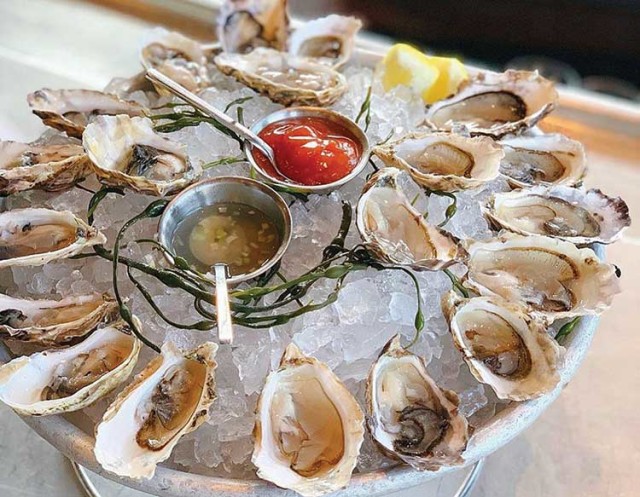 Can you believe Green’s in Fort Mason is celebrating its 40th anniversary? If you’ve taken it for granted or haven’t visited at all, tucked away in Fort Mason with its incredible bridge view, get thee hence for its Acclaimed Chef Dinner Series (monthly through December) featuring a four-course meal prepared by a local acclaimed chef — this month it’s the legendary Alice Waters, so we know you won’t want to miss that (Monday, Aug. 5; greensrestaurant.com).

The eating and drinking extravaganza Eat Drink SF has left the Fort Mason venue this year, so you’ll have to head across town to Dogpatch and the gigantic space at The Midway (Saturday, Aug. 24; eatdrink-sf.com). … Oyster lovers unite: Oysterfest at Waterbar benefits the Surfrider Foundation and includes more than just oysters, like other tasty bites and hors d’oeuvres, wine and craft beers, music and games, and more (Sunday, Aug. 25; waterbarsf.com). … For some wine-tasting in our own backyard, check out the Presidio Cafe, where sommelier and certified wine educator Michael Perry has been conducting wine seminars for years, generally on the fourth Tuesday of each month. Join him this month for ABC: Anything But Cabernet/Chardonnay (Tuesday, Aug. 27; presidio.gov).

Grab the family and head over to Union Square for a screening of Spider-Man: Into the Spider Verse (outdoors and free), where you can even reserve seats (Friday, Aug. 23, sfntf.squarespace.com). … For something on the darker side, try SFMOMA for Modern Cinema: “Haunted! Gothic Tales by Women,” by Mary Shelley, Anne Rice, the Brontë sisters, and Toni Morrison (Wednesday and Saturday through Aug. 31; sfmoma.org). … And for some vintage science fiction, The Godzilla Fest will fit the bill with 11 classics at the Balboa Theatre (Friday–Sunday, Aug. 23–25, cinemasf.com).

More Not to Miss »