Suzanne Ramsey: Blithe keyboardist, ukulele-player, and singer who performs as Kitten on the Keys is a San Francisco treat

There’s a certain brand of talent laced with eccentricity, humor, and sometimes genuine beauty that seems specific or, better yet, peculiar to the Bay Area — a place where a comedian like Robin Williams, a band like the Tubes, or contemporary performing troupes such as the Hubba Hubba Revue and Kat Robichaud’s Misfit Cabaret can find support, respect, and adoration, all of which can lead to wider acclaim. Suzanne Ramsey, who has charmed audiences for decades while still remaining younger than springtime, embodies that sort of artist. And, through some fascinating circumstances, she has actually earned a share of recognition and a troop of fans on the international front, especially la belle France, far from the Pacific Coast Highway.

Though it might sound glib to say so, she’s like the spiritual and musical offspring of Fats Waller and Betty Boop, tickling the ivories (piano or accordion) in a nimble and jocular manner, while trilling out vintage tunes like the sauciest of live-action cartoon temptresses. When you toss in her uke and a fashion sense that’s one part glitzy showgirl and one part thrift store goddess, you’ve got an inimitable package. Since 2001, she’s released about a half dozen albums of her own that mix chestnuts from the Great American Songbook, classic ragtime, and wry original numbers in a vaudevillian, jaunty Tin Pan Alley style. The latest is this year’s dance-oriented Kitten on the Keys Sings Bart and Baker. Additionally, she’s contributed her musical skills to a handful of other people’s recordings.

Raised in the Bay Area by Missouri-bred parents, Ramsey dipped her toe into the showbiz waters as a toddler, doing children’s theater, moving up to classes at ACT, and, of course, learning the piano like any good suburban youngster. Her somewhat randy song list and asides and her theatrical flourishes when she performs mark her as a delightful cabaret act. But her career has included stints in a range of rock bands (one including a prefame Courtney Love), jazz groups, marching bands, and theater orchestras, musical team-ups with drag queens and other performance artists, and even a striptease while playing the accordion. She’s appeared on TV programs, played festivals and benefits, entertained elders in rest homes, adopted multiple stage personas, and taken a stab at a Dixieland-polka fusion. Mostly though, it’s Kitten on a stage with her voice, her instrument of choice, her naughty, witty banter — as befits many of the double entendre-laden ditties from the 1920s and ’30s she plays, such as “T’ain’t No Sin (to Take Off Your Skin and Dance Around in Your Bones)” and “I Wanna Be Bad.” And sometimes, it’s done with a kitty puppet on one hand.

So how does an unquestionably talented solo variety act that plays bars, saloons, cafes, and such in San Francisco end up on French television and walking the red carpet at the Cannes Film Festival? By hooking up with kindred spirits who also have a reverence for traditional vaudeville-style entertainment — a touring group of (mostly) women called Cabaret New Burlesque. Ramsey has always had an affinity for burlesque, an art form with an old-timey history that has experienced a recent revival. Spotlighted between the dancer’s routines, she’s been a part of Burlesquefest, Tease-O-Rama, Frisky Frolics, and the Tin Pan Alley Vaudeville Review. On tour in France, the Cabaret New Burlesque gang had the good fortune to be seen and admired by renowned French actor Mathieu Amalric, who decided to direct and star in a blend of comedy and drama about a producer who brings an American neo-burlesque troupe to France. He cast the members of Cabaret New Burlesque, including Kitten on the Keys, as the troupe, filming them as they toured and performed their show in a series of French cities.

The completed feature, Tournée, premiered at the 2010 Cannes Film Festival where it won the FIPRESCI Award, a major critics’ award, while Amalric received the best director award. Yes, the Cabaret New Burlesque group got the full paparazzi treatment, and helped promote the movie with performances and interviews on French TV. Thus, Ramsey garnered a bunch of fans in France. 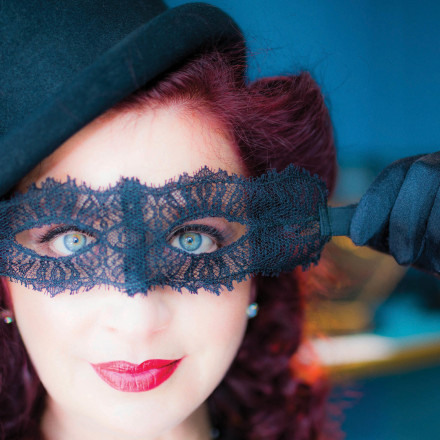 What leads a modern girl from this part of the world to become so enamored of the music and styles of the past? “My passion for all things vintage happened as a kid,” she says. “I loved Betty Boop cartoons, The Little Rascals, and especially Shirley Temple. I used to stay home from Sunday school just to watch the 10 a.m. Shirley Temple films on local TV.” She grew up loving the rock music of the day as well: Elton John, Alice Cooper, Kiss, DEVO, Tuxedomoon, Siouxsie & the Banshees, New Order, The Cramps, The Dead Kennedys, and so on.

Her punk rock edge, befitting someone who came of age during the new-wave era, and her interest in the glamour and decadence of Weimer-era cabaret don’t create a dichotomy. She says they feed off one another.

Plus, she’s not going to alienate an audience that feels disconnected by the anachronistic nature of her approach. Instead, she adapts familiar rock songs to her traditional sound. She’s a devoted fan of the glam-rockers Queen, and is happy to reinvent numbers by that band as well as Pink Floyd, Led Zeppelin, the Rolling Stones, The Cure, Joy Division, Blondie, and Radiohead in an old-fashioned mode.

In short, there’s nothing quite like Kitten on the Keys, a name that comes from the title of a 1921 piano rag novelty piece by Zez Confrey. According to an interview from a few years ago, Ramsey thought the name “felt like my crazy mind; a zillion little paws pouncing on the keys and making a racket!” Perhaps, but a racket like no other.

Kitten on the Keys: Upcoming Schedule

Tweet
Send to a Friend Print
Michael Snyder is a print and broadcast journalist who covers pop culture on KPFK/Pacifica Radio’s David Feldman Show and on Michael Snyder’s Culture Blast, via GABnet.net, Roku, and YouTube. You can follow Michael on Twitter: @cultureblaster