The Cult of the Machine: Precisionism and American Art at the de Young

The de Young Museum is presenting a large-scale, traveling survey of Precisionism, the first modern art movement to come out of the United States. During the early 20th century, Precisionism was born out of industrialization. Originating from Cubism and Futurism, primarily European painting movements, Precisionism married these styles with contemporary American imagery — urban industrial forms, including bridges, vehicles, and assembly lines. Even the pastoral found its place in this forward-thinking approach to visual art. The style combined highly structured, geometric compositions with smooth surfaces. Imagery was abstracted, simplifying forms into streamlined shapes and vibrant colors.

More than 100 Precisionist masterworks by seminal artists such as Charles Sheeler, Georgia O’Keefe, and Charles Demuth are displayed alongside prints by photographers like Imogen Cunningham and Paul Strand; also, clips from films such as Charlie Chaplin’s Modern Times along with decorative arts and industrial objects from this period. The economic and social changes during this era were met with a certain amount of ambivalence from the art world. The potential dangers and misuses of technology didn’t escape their notice. The majority of the Precisionist works were executed during the turbulence experienced between the World Wars — a time of extreme uncertainty that created contradictory responses in the arts, literature, and popular culture.

The exhibition begins with objects by Dada artists Marcel Duchamp and Francis Picabia to establish the “machine aesthetic” that preceded the Precisionist movement. A screening of Ralph Steiner’s 1930 film, Mechanical Principles, is a reflection on various mechanisms in balletic motion. Gerald Murphy’s historic painting Watch (1925), containing themes relating to man and machines, is a centerpiece of the show. 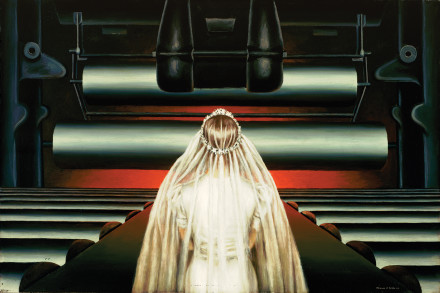 The last gallery showcases Clarence Carter’s War Bride (1940), a somber reflection of humanity’s relationship to technology. Emma Acker, associate curator of American art for the Fine Arts Museums, notes how relevant these artists’ responses to industrialization are to our 21st century relationship with technology: “They hold up a mirror to our own complicated responses to the legacies of industrialization and technological progress as we continue to navigate our relationships with the ever-multiplying devices that surround us and shape our daily existence.”

Masterpieces of machine-age Modernism are on loan from more than 50 institutions from across the United States, including the Brooklyn Museum of Art, Dallas Museum of Art, Harvard Art Museums, National Gallery of Art, Walker Art Center, and many others.