The Speakeasy: Theater as time machine

A gentleman takes in a show in the cabaret. Photo: Peter Liu
by Michael Snyder

It was a temperate evening on the Barbary Coast. The meet-up was on the corner of Grant and Vallejo Streets. He was a little on the flamboyant side in his orange hat and scarf, but I had the password, and he had the goods: directions to a secret, underground nightclub. There would be a short walk, an unassuming storefront entrance, a stairway down into the depths of the building, and a specific knock on a mighty wooden door before I could gain entry. But once inside, a world of slightly seedy glamour, potential danger, intrigue, period music, sly and boisterous comedy, and legitimate drama awaited me and a bunch of regular Joes and Jills and slumming swells on the scene.

I was at The Speakeasy — an incredibly accomplished, detail-oriented immersive theatrical event presented and performed by a large, talented, and thoroughly committed cast and crew. It’s scintillating entertainment, and that’s just for starters. It’s also a chance for audience members to experience something akin to time travel, without messy dinosaur attacks, bloody jousts, or Jetsons-style dehydrated food packets.

Patrons are led into a reproduction of a Prohibition-era San Francisco speakeasy, circa 1923, where they are greeted by a diverse and dedicated group of actors portraying a collection of characters that include cabaret performers, management, staffers, hired muscle, lushes, bar girls, and ordinary folk going about their lives. To up the experiential aspect of the production, the performers can and will interact with the actual paying customers who are encouraged to attend in period garb (or close to it). Overtly modern clothing — denim, sneakers, T-shirts with logos, and the like — is frowned upon, although the producers do provide more acceptable costuming for rental at the coat check.

In keeping with the spirit of the event, I dispensed with my usual leather motorcycle jacket and jeans, and wore a double-breasted wide-lapelled jacket over a black button-down shirt and slacks. Upon entering the speakeasy, I found myself in a moodily lit bar with a small stage that accommodated a pianist who was joined by a brash Abbott & Costello-style comic duo and then a supple-voiced torch singer named Velma. This was just the first of four official rooms and two side room peep shows that make up the facility.

Eventually, those of us who were let into the bar area realized we could move freely into a casino (although through a sliding door disguised as a book case), a lounge/anteroom, and the jewel of the facility, the Palace Theater cabaret, complete with three separate shows featuring a versatile house band backing up the aforementioned Velma; a glib, charismatic, occasionally leering master of ceremonies; a troupe of sexy, buoyant, singing, dancing chorus girls; and a series of variety acts including an imperious magician. For the formal on-stage entertainment, the songs were vintage, circa the Roaring ’20s, as were the bits and the patter — the latter replete with era- and area-specific references.

Over the course of a roughly three-hour extravaganza, I wandered through the joint, witnessing such compelling storylines as a World War I vet wrestling with PTSD; a young couple whose relationship was on the skids; an older husband and wife seeking a wayward young woman who had been romantically involved with their son; a middle-aged married man whose illicit liaison was publicly revealed and reviled; an embittered chorus girl whose brother, a croupier in the casino, had a gambling problem; and most intriguingly, Velma’s personal travails involving the return of her jealous, ne’er-do-well husband, Floyd. Potent stuff. 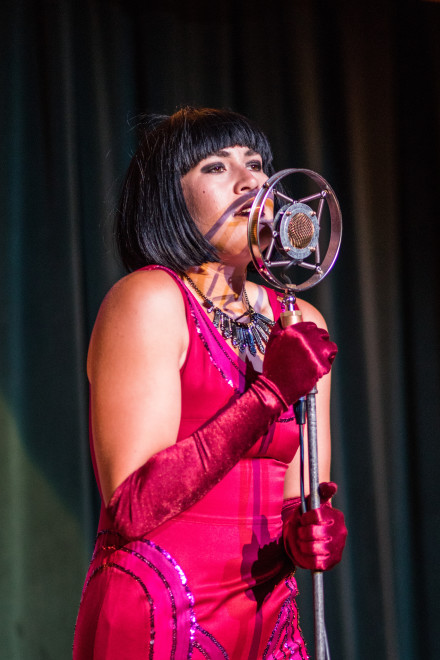 On top of the constant action in the four “public” spaces (including the three successive hour-long cabaret shows), there were two “private” areas on display to audience members. One was the manager’s office where he conducted phone business and deals with his employees and various crises as the night progressed — issues that eventually brought him into other areas of the club. You could eavesdrop on him by peeking through little windows in one wall and listening in via an antique-style hand-held receiver. The other, more provocative locale was the ladies’ dressing room, with an ostensibly one-way mirror on the chorus girls and Velma as they changed their plethora of colorful, sometimes scanty costumes, fixed their makeup, gossiped, argued, broke down and, in one case, broke up.

Ultimately, I found myself choosing a handful of characters and following them through the evening’s machinations. Particularly compelling were the troubled diva Velma, beautifully embodied by the opera-trained Nikola Printz, and Floyd, whose unsettling mix of charm, sleaze, and menace was nailed by Brian Raffi. I was also impressed by the indefatigable Ron Campbell as M.C. Eddie, whose energy, focus and theatrical bonhomie never seemed to flag, and Saskia Marguerite as chorus girl Viola whose two-hander comedy act with Campbell had them channeling George Burns and Gracie Allen in a routine that was straight out of classic vaudeville. Singling out these performers is not meant to do a disservice to anyone else in the ensemble. Everyone in the cast — 39 strong, plus a seven-piece band — was on point throughout the night. (A total of 81 members of the cast and crew are necessary to the presentation.)

It should be made clear that The Speakeasy is a tightly scripted affair (1,487 pages in length at last count), despite room for ad-libbing and spontaneity, with circumstances playing out simultaneously in all corners of the building. As such, you can attend multiple times and see what amounts to a different play on each occasion. And there are reasonably priced food and drink options — the latter including alcoholic beverages. Although Prohibition is in effect during the depicted era, it’s a speakeasy, and the booze, illegal though it may be, is flowing.

The Speakeasy began with a more modest run at a smaller space in the Tenderloin, and was greeted with such a positive response that the producers and investors managed to finance this more elaborate and elegant location and iteration. For now, the venue is open on Thursday through Saturday nights, with The Speakeasy playing on Thursdays and Saturdays, and A Night at the Palace — essentially Speakeasy: The Party without all the drama, a looser, more improvisational event with many of the same characters — settling in on Fridays. Plus, on some weekend nights, starting at around 11:15 p.m., there’s the more informal after-party known as Club 1234, with cool drinks and live jazz, separate from the proper shows.

For more information on all the happenings, including ticket prices and instructions, visit thespeakeasysf.com.

For me, The Speakeasy was transporting — one of the most satisfying and enjoyable theatrical experiences I’ve ever had. I recommend it, big time. And if you choose to attend, tell ’em Mikey sent you.