The Summer of Love turns 50 at the de Young

A half-century ago, the Summer of Love was captured in full color in collectible posters. Courtesy: FAMSF
by Sharon Anderson

Art, fashion and rock ‘n’ roll will come together at the de Young to commemorate the 50th anniversary celebration of San Francisco’s most vibrant counterculture moment — the summer of 1967.

To support social and political transformation, in 1967 like-minded people gathered together, proving that one city can change the world. Music journalist Joel Selvin observed:

“Even the treacly ubiquitous hit — Scott MacKenzie’s ‘San Francisco (Be Sure to Wear Flowers in Your Hair),’ written by John Phillips of the Mamas and the Papas as a commercial for the Monterey Pop Festival — paid obeisance to the central truth of rock music around the world; the heart of the Summer of Love came from San Francisco.”

It’s hard to imagine the psychedelic rock scene of the late 1960s without “the San Francisco sound” pioneered by groups like the Grateful Dead, Big Brother and the Holding Company, and the Jefferson Airplane. 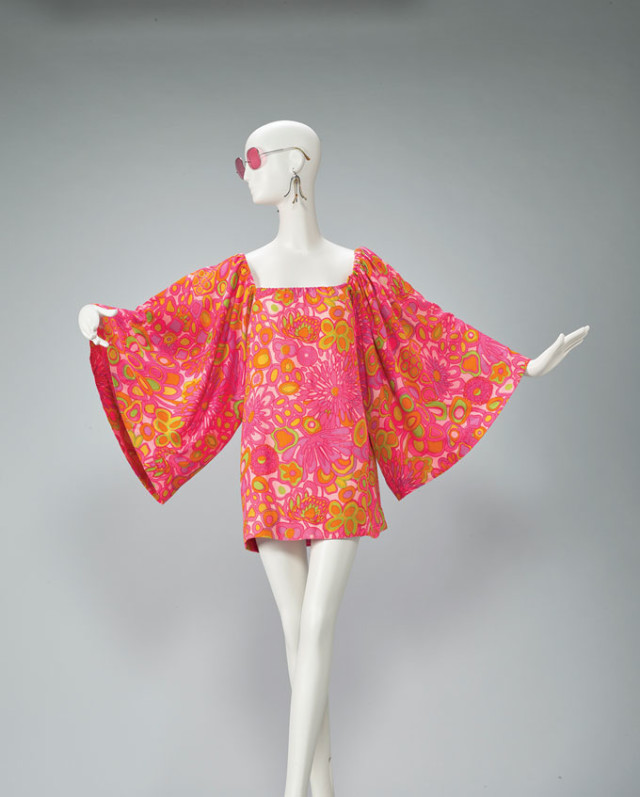 The exhibition opens with the Trips Festival of 1966, the first meaningful gathering of counterculture figures, co-organized by American writers Stewart Brand and Ken Kesey, an experience complete with liquid light, slide shows, film projections and electronic sounds providing the influence and context for what came next. Haight-Ashbury and Golden Gate Park were sites of pivotal gatherings such as the first Human Be-in of January 1967 and groundbreaking street theater by the Diggers. Photographers Ruth-Marion Baruch, Herb Greene, Jim Marshall, Elaine Mayes, and Leland Rice documented these social movements in their works. But don’t worry if you weren’t there for the be-ins, the miniskirts, the music, and the head shops, because this exhibition has an immersive light show experience. Travel back to groovier times with multisensory liquid and multimedia light shows by Ham and Van Meter, similar to the light shows that were projected over musicians and concertgoers alike.

The Summer of Love Experience lets us all participate in an era when art and activism intersected to form a movement whose influence can still be felt today.