The trials of Gavin 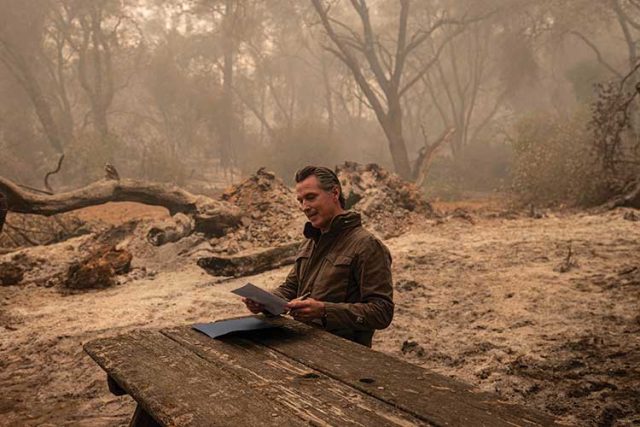 Gov. Gavin Newsom at the site of the September North Complex Fire. Photo: Office of the Governor of California
by John Zipperer

In Nov. 2018, Gavin Newsom was elected governor of California, a liberal Democrat winning with a landslide 24-point margin in one of the bluest states in the Union. It was as if he were a poker player holding a royal flush, and his opponents had already tossed the keys to their late-model Lamborghinis onto the pot.

He was at the top of his game, but let’s drop the poker metaphor, because I’ve exhausted my paltry knowledge of it. The point remains: Newsom was a popular governor, with a state economy thrumming along nicely, giving him plenty of voter goodwill and tax dollars to tackle big problems like education, homelessness, and housing. Even when the pandemic hit, Newsom emerged as one of the more adept governors, responding quickly, communicating clearly how Californians should protect themselves and each other, and pushing the federal government to up its game while at the same time not antagonizing the thin-skinned President Trump.

But one dinner has proven to be costly to the governor’s current standing and threatens to bring a premature end to his political career.

They say that no publicity is bad publicity, as long as they spell your name correctly. Governor Newsom certainly would rather not have had his name in certain news stories in November. First we learned he had attended a gathering at the high-priced French Laundry even as Californians were being told to stay home, socially distance, avoid church services, and more or less hibernate. It’s not a great time to visit a laundromat, even if it does serve good food. But the publicity got worse, with photos of the little shindig revealing that this gathering was indoors, that most of the people around his table were not wearing masks, nor were they socially distanced.

Overnight, Newsom went from popular policy wonk governor to a hypocrite capable of doing a dumb thing. Suddenly a fringe attempt to recall him from office took on new life.

The French Laundry visit was “an absolute breach of trust,” political analyst Melissa Caen told me during a recent political roundtable. On that same panel, Carson Bruno noted that San Francisco Mayor London Breed had her own French Laundry visit earlier in November. “It seems to be the hopping place during the pandemic,” he said.

Though Breed’s visit reportedly didn’t violate guidelines, and Newsom rather clumsily tried to explain state and local restaurant rules were different things, Bruno said it still hurts their message. People are having enough trouble trying to understand the rules during the pandemic. Political leaders asking people to make sacrifices must rely on trust. “He lost that trust,” said Carson. “How [does he] win back that trust?”

How seriously in danger is Newsom’s governorship? The only real threat is a recall attempt that has been gathering steam, fueld by anger over pandemic restrictions on business and religious congregations. “People had every reason to think this was kind of a joke,” KQED News reporter Guy Marzorati told me. “Ever since Newsom took office in 2018, there have been a series of slow-starting and quickly ending recall campaigns against him. . . . Even this campaign initially was really slow at collecting signatures, and then all of a sudden it took off in November” after the French Laundry revelation. The recall effort received an extension on the deadline to collect the 1.5 million signatures needed to qualify for the ballot (it already claims more than 900,000 signatures). The recall has “kind of taken off and it’s gotten the attention of the governor’s office and the governor’s political staff,” said Marzorati.

If Republicans start to smell gubernatorial blood in the water, then GOP money might flow into the recall effort. But just as there are reasons for Newsom to worry, there are perhaps more reasons for worries on the part of people looking to jump on that particular anti-Newsom bandwagon.

“He’s going to be fine, unless this recall group comes up with a better alternative,” said Caen. “Right now, it’s like Gavin Newsom or—who?” Bruno said that its supporters also have to make a case for holding a recall in 2021, the year before Newsom will be up for reelection anyway. Why waste time and money on an additional statewide election?

To resurrect the poker analogy, it’s a good bet that Newsom will survive his current turbulence; he’s still got a good hand. If he can pull off school reopenings, speed up the vaccine rollout, and be ready to fully reopen the economy at the appropriate time, he could soon be looking back at the recall and this bumpy beginning to 2021 as just a bad memory.