Controversy is nothing new when it comes to planning major additions or changes to the Presidio of San Francisco’s military base-turned-national park. Promotors of several new plans have found that to be the case as they try to convince the public and city officials of the benefits of selecting their plan.

The beautiful site of this current transformation is the area facing the bay at Crissy Field, where a new building will replace the Sports Basement, which was a commissary during military days. Sports Basement is relocating to Mason Street, and at press time the Presidio Trust was reviewing the environmental assessment for that move.

Those vying to be selected to develop the spot near Crissy Field have been narrowed to three: the Lucas Cultural Arts Museum, proposed by filmmaker George Lucas; the Golden Gate National Parks Conservancy, called The Presidio Exchange; and the Bridge/Sustainability Institute. 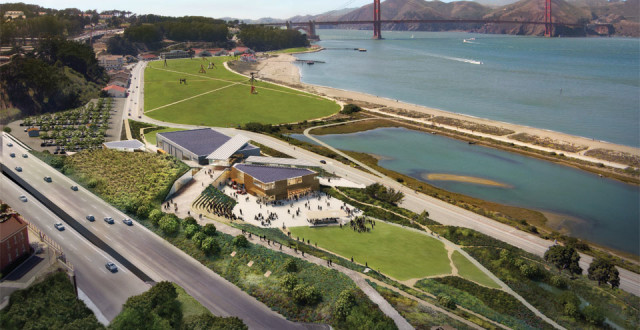 Golden Gate National Parks Conservancy — The Presidio Exchange. The PX would be a new civic space that curates and creates unique visitor experiences at the Presidio, according to Greg Moore, Parks Conservancy president and CEO. The PX would be a 97,000-square-foot multi-use facility offering a set of interconnected indoor and outdoor spaces designed to accommodate a wide range of interactive public programs and activities, including installations, art exhibits, workshops, a forum, demonstrations, concerts, performances, and more. As envisioned, the PX would serve as a program hub and gathering place for the public and a gateway to the remarkable assets of the Presidio.

Lucas Cultural Arts Museum. This museum would bring to the community a state-of-the-art facility to nurture curiosity, ignite imaginations, and broaden the spirit of adventure for children and families, schools, educators and visitors. Lucas’s collection ranges from fine art to animation, and is comprised of works of the great masters of the Golden Age of illustration through today’s digital artists. Lucas would bring a wealth of strong affiliations with other significant arts and education institutions from around the world to help enhance the unique place that is the Presidio. At meetings in mid-October, Lucas’s project was criticized by some architects who were disappointed by the traditional design of his project; for his part, Lucas has suggested that he would develop the museum in Chicago if he didn’t get approval for the Crissy Field spot.

Bridge/Sustainability Institute. This plan would create a space to explore the critical social, economic and environmental issues of our time. Rotating exhibits would display today’s challenges, from water conservation to labor practices, and a café would offer food that was sustainably and equitably sourced. The Sustainability Marketplace would highlight each product’s environmental and social rating. It would be a place for poets to scientists, activists to CEOs, and friends and neighbors to each other. Lectures and public forums can give people the chance to work with local politicians, academics, and corporate leaders, and parents could show their children how the wetlands restoration transformed this site back to its natural state. The building itself and its surrounding landscape would be the bridge between all of these parties.

But aside from debates over the merits of each plan, any significant modification to a historic federal property must follow a defined procedure. 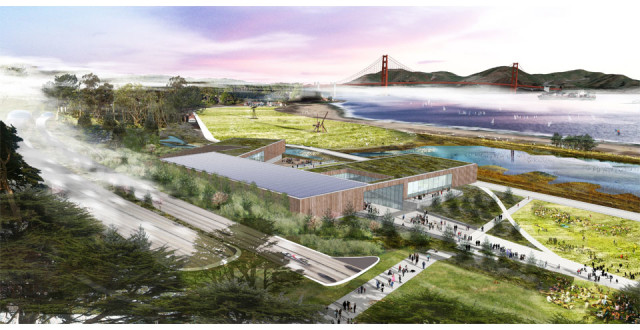 In November 2012, the Presidio Trust issued a Request for Concept Proposals (RFCP). The 16 proposals submitted were whittled down to the three in May 2013 and submitted on Sept. 16, 2013. One week later, the three teams offered presentations in a public meeting that included a question and answer period. A public meeting of the Presidio Trust Board of Directors is scheduled for Oct. 24.

April 2013: Presidio Trust Board of Directors invited comments on the 16 teams

May 2013: Three finalists chosen after public meeting comments and the Trust’s interaction with the teams; Trust requested RFPs from the three

Sept. 23, 2013: Public meeting with presentations and questions and answers

Beyond that, according to the Presidio Trust, there is no timeline available at this time.