Vagabonding through a changing America

The modern flirtation with authoritarianism isn’t new; Americans have long felt an attraction to the dark side 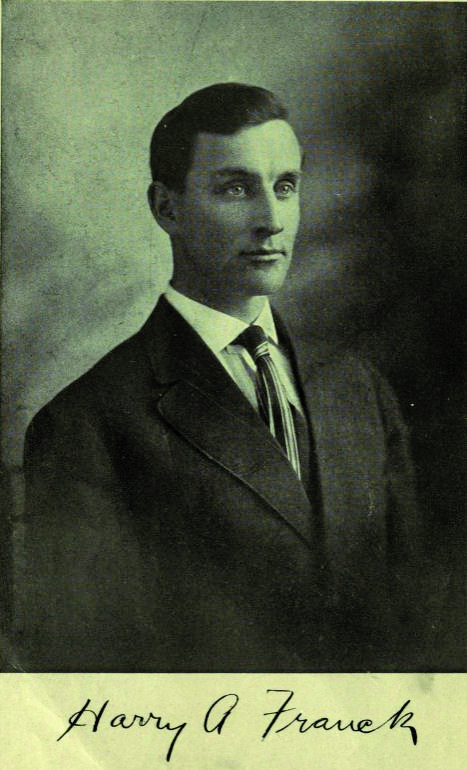 A 1910 photo of vagabond author Harry A. Franck. Photo: unknown
by John Zipperer

One can easily imagine Harry A. Franck in San Francisco. I expect he’d have felt right at home hanging out in a North Beach bar, swapping tales — many of them true — with locals while learning about the strange ways of these people called San Franciscans. Franck, a travel writer who died in 1962, made his career writing about his travels around the world, or vagabonding, as he called it. In a strange way, he provides context for our modern travails.

I first heard about him when I happened upon a used book sale in the streets of Manhattan two decades ago and picked up Franck’s 1920 book Vagabonding Through Changing Germany. It was a fascinating true tale of his journey on foot across post-World War I Germany, and it is filled with insight derived simply by describing daily life and talking to locals — many of whom were still in shock that the United States hadn’t supported Germany in the war, because they viewed America as a German country.

Not all of his books hold up well these many decades later. I couldn’t bring myself to finish his tome on travelling through China due to its casual racism. But 15 years after his journey to the Fatherland, Franck visited Mother Russia and published A Vagabond in Sovietland, detailing his trip across the land of Stalin, concentration camps, political repression, and massive shortages of every consumer good and comfort. After about 250 pages of reporting on dreary accommodations, bad plumbing, bad food, terrible service, and repression for anyone who didn’t dance to Stalin’s tune, Franck still wrote rhapsodically about the Soviet system and how it is better than America’s system. Even as he’s relating the final steps of his journey and by his own account the towns and buildings and people all improve the further his train moved westward and finally crossed the border, Franck can’t shake his crush on the dictatorial system in which peril and punishment are an everyday life.

Especially for the past seven months, ever since President Trump’s beer hall  putsch attempt at the U.S. Capitol, I’ve been growing more pessimistic about whether Americans even cared enough about democracy to sustain it. As countless national politicians fell into lockstep behind widely debunked election lies, justifying the Capitol riot and threatening more to come, things didn’t look good for those of us who think a country performs best when it balances competing forces and avoids eternal zero-sum warfare.

But our democracy just might survive this, because it has done so before.

As the Harry Franck example shows, Americans have flirted with undemocratic and destructive ideologies and regimes before. In the 1930s through arguably the 1960s, millions of Americans were convinced that the Soviets (or Mao or the Viet Cong, or Castro) had a better, fairer system that justified persecutions and authoritarianism. (Even years later, in the late 1980s, I remember my university’s student government president flying off to attend a “peace conference” — in North Korea.)

Today, the undemocratic drang nach Autoritarismus is felt mostly, but not exclusively, on the right side of the political spectrum. But the current system has few backers on the left. In April 2020, I interviewed Shahid Buttar, a left-wing challenger to Nancy Pelosi. He of course had no realistic chance of beating the powerhouse incumbent, but for most of the interview I thought he acquitted himself well. Though his politics are not mine, he mostly came across as serious and committed. Then, as the last question, my co-host said that if Joe Biden is the Democratic nominee (instead of Buttar’s progressive choice), he’d vote for Biden, right? Well, no; Buttar said Biden would be even worse than Trump. Establishment man and all that.

A further five years back, in 2016, political scientists Roberto Stefan Foa and Yascha Mounk examined the results of surveys of attitudes about democracy and discovered some disturbing news. They found that people born between the world wars were strongly devoted to democracy; 72 percent of them said it was absolutely essential for them “to live in a democracy.” But on the same question, only 30 percent of millennials agreed.

Similarly, Foa and Mounk report that 43 percent of older Americans “do not believe it is legitimate in a democracy for the military to take over when the government is incompetent or failing to do its job,” but only 19 percent of millennials feel that way.

In short, if you thought millennials were going to save democracy, think again; they’re the most likely to bash it on the head with a shovel.

Former George W. Bush speechwriter David Frum wrote in 2018 “Maybe you do not much care about the future of the Republican Party. You should. Conservatives will always be with us. If conservatives become convinced that they cannot win democratically, they will not abandon conservatism. They will reject democracy.”

Same story on the left.