When my Irish and Ukrainian father married my mother, it didn’t go over well with my Sicilian grandfather, but when he decided to move her across the country from Rhode Island to Northern California so he could attend teaching college, it nearly ruined any chance they had at a relationship in the future. My father appeased my grandfather with a promise to bring her home every summer.

My father was a fiscal Republican, but he leaned to the left when it came to social issues. He grew up in a family that traveled with Ringling Bros. and Barnum & Bailey Circus, working in the yards and cooking for performers. The clowns were mostly gay, the acrobats from China, the animal handlers from Eastern Europe, and the trapeze artists from Latin America. After years of living in California, he had grown even more socially liberal, and it was sometimes tough returning to Rhode Island, where the level of prejudice was palpable. As my grandfather acclimated to America, he picked up some of those traits.

On one of our many summers in Federal Hill, my father found himself sitting on the screened porch on a warm summer evening with my grandfather, sipping Chianti and smoking cigars. As a couple of African American teenagers were riding their bikes past the house, one reached out and smacked the mailbox, and my grandfather called them the n-word. My father mustered his courage and said, “Well Lorenzo, you know what they say about Sicilians …” There was a long period of silence as my grandfather stared straight ahead, chomping on the end of his cigar. My father braced himself for my grandfather’s infamous temper, but it never appeared — and he never said the n-word again. 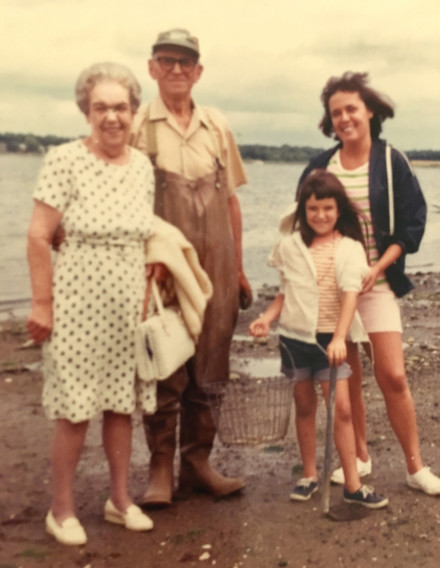 Clamming on the Rhode Island coast with my grandparents and my mother on one of my many childhood summer trips.

Even though I know my heritage, I recently decided to have my DNA tested. It came back as expected — Irish, Ukrainian, Italian, and a little Welsh on my maternal grandmother’s side. But some of my DNA is West Asian. Upon further research I discovered this is likely from my Sicilian heritage as Sicily — the world’s most conquered island — has slightly higher percentages of Southwest Asian DNA than the rest of southern Italy because the Arabs are known to have spread the “J1 lineage” during the spread of Islam. One reference remarked, “As Metternich said in 1847, ‘Italy is only a geographical expression.’ The peninsula was unified by Piedmont two decades later, but Metternich’s remark still largely holds true today. There isn’t one Italian people, but a multitude of ethnic and cultural groups, often with an independent history of their own going back to ancient times.”

The Arabs came to Sicily from the south after establishing themselves in Africa and mingling with the local Berber tribes. They fought 100 years to dominate Sicily, obeying the rules of jihad. During their 200-year domination, the Arabs built irrigation to cultivate crops and the citrus trees they brought, creating the lush gardens the Koran promised in the afterlife. They invented dried pasta and ice cream, made sea salt, and turned Sicily into one of the richest trading centers in the world. The Arabs also built fortresses for protection and cities all over the island, and they filled those cities with mosques, markets, and offices of local government. Until this day, Sicilian girls who look like my mother — black hair, dark skin, dark eyes — are called “moors,” a reference to the Berber and Arab peoples from North Africa.

When Sicilians first immigrated to the American South, they were often designated as “black” on census forms. They weren’t allowed to marry “whites.” In the 1890s, thousands of Sicilians arrived in New Orleans and settled in the French Quarter, which became known as “Little Sicily.” Prejudice was rampant, with New Orleans Mayor Joseph A. Shakspeare stating that Sicilians were “the most idle, vicious, and worthless people,” and claiming they were “filthy in their persons and homes.” On Oct. 15, 1890, New Orleans police chief David Hennessy was shot. Before he died, he reportedly whispered that the culprits were “Dagoes” (a derogatory term for those of Mediterranean heritage), resulting in a mass arrest of Italians. Eventually nine Sicilian men were tried and acquitted of the murder, but a large mob — led by some of the city’s leading citizens — stormed the prison, and shot and clubbed to death some of the men as they cowered in their cells, then dragged out and hanged two more. It was the largest lynching in American history and was one of six times in the 1890s that Italians were killed by mob violence.

As I watched the white supremacists and Nazi sympathizers march through the streets of Charlottesville, Va. on Aug. 12, raising their torches as they angrily chanted hateful rhetoric about those they perceive to be different, I was reminded of that dark chapter in Sicilian American history, and it made me wish all of them would test their DNA, too. Even if they can trace their heritage back to Thomas Jefferson — who fathered children with one of his slaves, Sally Hemings — they may not be as white as they think they are.