A good whistleblower, a Pagoda Palace performer, and the Filbert gardener

Hero worship comes naturally to me — perhaps because I’m nonheroic. But I’m a late bloomer so I still have a chance. Here are three of my North Beach heroes, past and present.

A while back, I was thinking about whistleblowers. Who hasn’t? Let’s take the position that there are both good and bad whistleblowers. This is about a good one who lives right here in North Beach. His name is Peter Buxtun, and he was an epidemiologist and social worker for the U.S. Public Health Service back in 1965. His job was to interview patients with sexually transmitted diseases.

Buxtun learned that beginning in 1932 the PHS had been conducting a clinical study at the Tuskegee Institute in Alabama to study the natural progression of untreated syphilis in rural African-American men. The subjects of the study thought they were receiving free health care from the U.S. government. They were never told they had syphilis, and they were never treated for it even after penicillin was validated as an effective cure.

Possessing a high sense of moral principal, Buxtun in 1966 filed an official protest with the PHS. It was rejected on grounds that the study was not yet complete. He filed another a year later. It was ruled irrelevant. Then later he leaked information on the Tuskegee Syphilis Experiment to a reporter. It appeared in the Washington Star on July 25, 1972 and the next day the New York Times ran it on page one. A Congressional hearing was called, Buxton testified, and the experiment was terminated. The Tuskegee Syphilis Experiment has been called the most infamous biomedical research study in U.S. history.

Well, the derelict Pagoda Palace Theatre on Powell in North Beach has finally bit the dust. Actually, we bit its dust. During the demolition, I walked by, and got a jolt of nostalgia for the Cockettes and Sweet Pam.

I haven’t seen Sweet Pam in ages. Sweet Pam — Pam Tent is her name — was one of the few women in the gender-bending, hippie, acid, drag queen group called the Cockettes.

In the late ’60s and early ’70s, the Cockettes flamed high at the old Palace movie house. Sweet Pam wrote a book about the Cockettes called Midnight at the Palace. You might want to check it out.

Those were the waning days of psychedelic San Francisco and a strange, bead-bedecked, tie-dyed crowd of Cockettes worshippers blended with Nob Hill socialites to cheer the outrageous, live, midnight performances. The scent of patchouli oil (the hippie Chanel No. 5) mingled with the fashionable smell of sweet smoke.

And on stage were more than a dozen gay hippie men, a few women, and even a few straight guys who liked to play dress-up and were addicted to Hollywood glamour. Their frequent below-the-waist nudity was not a costume malfunction. One midnight in 1971 Truman Capote showed up. He was uncharacteristically almost speechless, but did manage to utter, “This is the most outrageous thing I have ever seen.” Flushed with their success in loosey-goosey San Francisco, the Cockettes played New York. Gore Vidal attended and later said, “Having no talent is not enough.” Our local kids bombed. But here they were a San Francisco sensation — louche, lewd, loopy, and la-di-da. Later, when the Cockettes had melted into obscurity, Sweet Pam became an accountant.

Personally, I miss the Cockettes. Certainly, their lives were out of control. They crashed and burned. But for a brief period they had enormous energy and enthusiasm and they didn’t give a damn about what they believed were shopworn conventions. They were free-spirited and independent. Isn’t that the way proud parents like to describe their children? 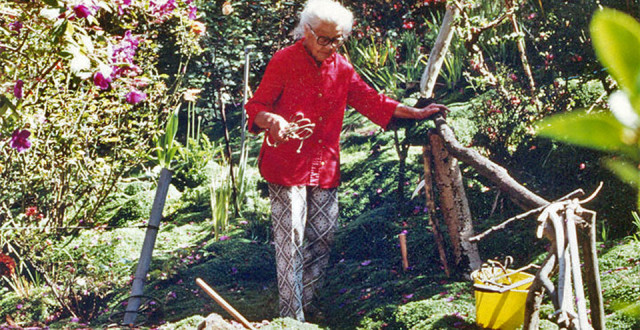 Though I have lived in San Francisco from diapers, through short pants and on to jeans, (my family lived way out on Turk Street in the sand dunes), it wasn’t until adulthood that I moved to Telegraph Hill to be cool — and I mean cool in the vernacular sense of the word. Grace Marchant assisted me to develop my self-declared coolness. Grace lived on the Filbert Steps halfway between Montgomery and Sansome, right where Napier Lane, with its ancient wooden walkway, crosses it.

One day looking for a San Francisco apartment, I ran into a high school girlfriend who lived in a tiny place on the Greenwich Steps. She took me up there and I was bitten — make that smitten. Anyway, she took me over to the Filbert Steps to meet Grace, who was the queen of the hill. It was my lucky day. A week later, Grace found an apartment for me on the Greenwich Steps — 60 or more wooden steps up to Montgomery and 60 or more steps down to Sansome. Speedy’s at Union and Montgomery delivered the groceries.

Grace Marchant was the constant gardener. Her legacy, the Grace Marchant Gardens, was carved out of the steep, eastern slope of Telegraph Hill on each side of the steps. Grace, who had been a Hollywood stuntwoman and a movie studio wardrobe mistress, moved to the Filbert Steps in 1949 to retire. At that time, the steep and rocky slope on both sides of the steps was a trash-strewn junkyard. She set about cleaning up the area and created a luxurious garden that she tended for more than 30 years. Hydrangeas, roses, fuchsias, poppies, foxglove, trumpet vines, loquat, banana, apple, and plum trees: They are all there in profusion. Grace died in 1982 at age 96. Her ashes are buried on the hill. If you don’t know the Grace Marchant Gardens, get over to the Filbert Steps as quickly as you can to rejuvenate your spirit.

Tweet
Send to a Friend Print
Ernest Beyl suggests you advise him of other North Beach heroes. E-mail: [email protected]