After the devastating fires, wine country is open for business

Part 2: The Mendocino Coast to Marshall

REJUVENATE AT THE STANFORD INN BY THE SEA

Just up the road from the spectacular Little River Inn is the Stanford Inn Eco-Resort (44850 Comptche Ukiah Rd., Mendocino, 800-331-8884, stanfordinn.com). Owners Joan and Jeff Stanford have created a haven for rejuvenation that includes the Mendocino Center for Living Well (massage and spa treatments, Chinese medicine, cooking and gardening classes, meditation, yoga and tai chi, and more), as well as one of the country’s most acclaimed vegan restaurants, The Ravens. 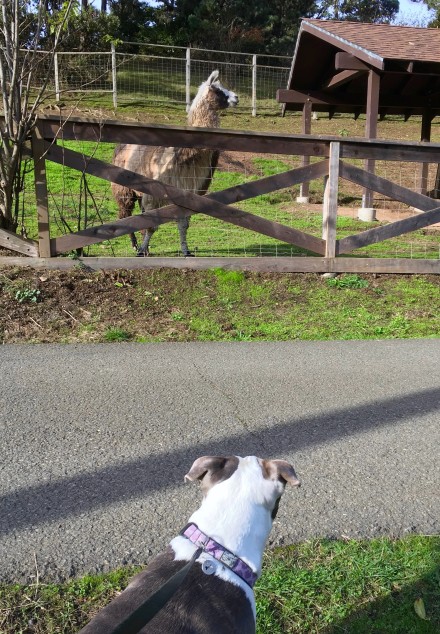 On our last visit to Mendocino, Steve and I took the dogs on a beautiful canoe ride at the inn’s “Catch a Canoe & Bicycles, too!” but the weather didn’t cooperate this time. Instead, we took Skylar and Blue on leisurely strolls between fits of rain through the orange, red, and yellow tinged grounds. We introduced the dogs to their first llamas (though it was obvious these weren’t the llamas’ first dogs) and wandered the organic gardens to see what would be on our dinner plates later. The dramatic atrium-enclosed pool had us wishing we remembered swimsuits, but we were just as happy settling into the sofa in the lobby, festively decorated for Christmas, where we found glasses of wine, a roaring fire, and a very sweet black cat curled up beside us. 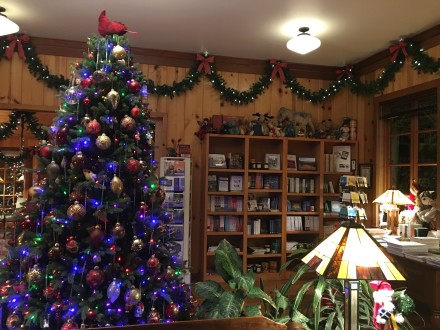 We stayed in one of the Forest Rooms, cozy and charming with a sophisticated touch, paneled in wood to mimic the views from the private deck, replete with a wood-burning fireplace ideal on a cold, rainy night. The dogs were greeted with house-made sweet potato treats (Skylar loved them, Blue not so much) while we got warm chocolate-chip cookies — some of the best I’ve had, vegan or otherwise. 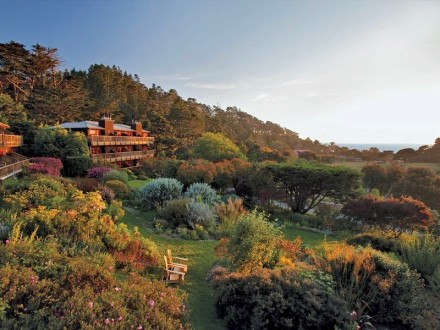 I’m not a huge meat eater, so I was excited to have dinner at The Ravens (Steve not so much). We started with a salad of massaged kale, which sounds pretentious, but is actually an important technique to bring raw kale to an edible texture. It was stunningly presented in a tower mixed with raisins and avocado verjus (pressed juice) vinaigrette, topped with cauliflower ceviche and avocado tartare. Anyone who knows me well knows I love sushi, and the evening’s selection satisfied my craving with carrots, maple-glazed tofu, red bell peppers, avocado, and cucumber wrapped in brown rice and drizzled with a silken tofu/Sriracha “Dynamite” sauce. My favorite dish was the creamy carrot soup thickened with coconut creamer, cauliflower, and potatoes. The carrots are steamed with tomatoes, roasted with garlic and onion, and puréed until velvety. By the end of our meal, Steve said, “I think I’m coming around on the vegan thing.” 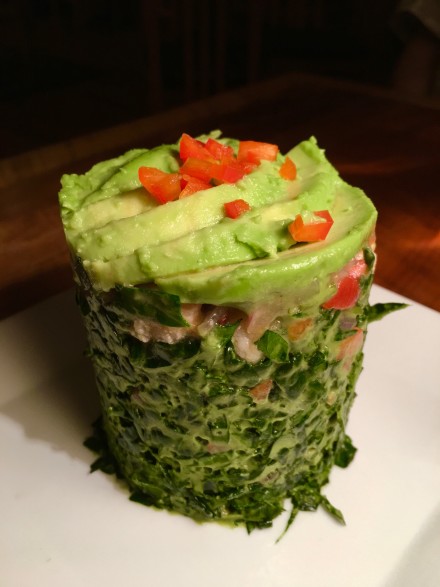 The next morning, we had our complimentary organic breakfast in the dog-friendly dining room, a large, open space by the lobby overlooking the lush grounds. I enjoyed the Benedict topped with meaty Portobello mushrooms, tomatoes, spinach, and spicy silken tofu Hollandaise served on a house-baked whole wheat English muffin. Steve had the light, crispy oat and buckwheat
waffle with organic maple syrup and fruit compote. 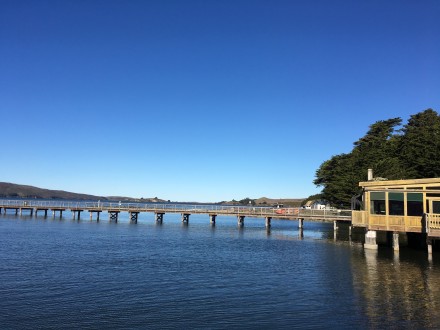 After breakfast, we headed for the quaint oyster-centric town of Marshall and a stay at one of my all-time favorite dog-exuberant spots, Nick’s Cove (23240 Highway 1, Marshall, 415-663-1033, nickscove.com), where we arrived in the nick of time to see Santa ride up in a boat. Locals and visitors alike gathered on the dock for hot cider and a toy drive for local kids. It set the tone for a relaxing stay at Al’s (our favorite waterfront cottage) where I took advantage of the claw-foot soaking tub while Steve snoozed with the pit bulls in front of the wood-burning stove and sunset bay views. We dined at the restaurant later that evening on succulent local oysters two ways: BBQ (house-made BBQ sauce, garlic-parsley butter) and baked mornay (Point Reyes Toma cheese, Parmesan, breadcrumbs).

OVER THE HILL TO RUTHERFORD 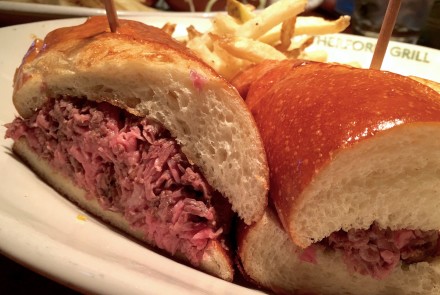 When we wound through the hills above Rutherford, we saw dramatic evidence of the ravaging wildfires — charred trees, skeletal grapevines, blackened ground, and crews still working to clean it up. But when we arrived at one of my go-to lunch spots, the Rutherford Grill (1180 Rutherford Rd., Rutherford, 707-963-1792, rutherfordgrill.com), it was teeming with locals, and we faced the usual hour wait (worth it for the best French dip sandwich in Wine Country). When I asked the hostess if the tourist business had returned, she shook her head. “We wish the media would stop talking about the fires,” she said, a refrain we heard often during our weeklong trip. “Please let people know we would love for them to come back.”

More Travel with your Dog »