Not since Mitt Romney traveled to Britain to tell our closest allies that they were going to screw up the London Olympics has a major sporting event been linked so closely to a city and its leaders as the recently completed America’s Cup. The promises from politicians and sailing enthusiasts and civic leaders was that the high-profile event would be a publicity bonanza and produce a financial windfall for the city. With audiences from 170 countries last month watching the two finalists zoom across the bay in front of the spectacular backdrop of the city, it is finally time to take stock of how well the Cup and the city did in living up to the promises and hopes for this major event.

After months of preliminary races, and even more months of drama in the press and on the water and in the courtroom, the 34th America’s Cup came down to defender Oracle Team USA (based at Golden Gate Yacht Club) and challenger Emirates Team New Zealand (based at Royal New Zealand Yacht Squadron) in the finals. For sailing fans, it was a time to see their sport at its highest level of competition up close and in their own front yard, and even many critics of the series (including people who have no love or understanding of sailing) have commented about the thrilling spectacle of the races, the super speed of the 72-foot catamarans chosen for this year’s race, and the skill and courage of the crews. 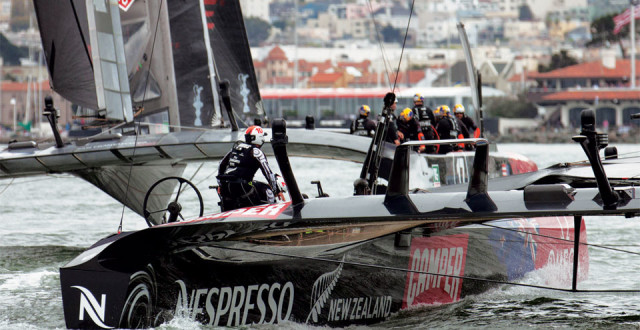 But there were disappointments, too, that have added to complaints from people who were never thrilled to host the Cup in the first place. Instead of the expected 15 competing teams, only four teams took part; the others were reportedly dissuaded by the estimated $50–$120 million cost. “Sure, we wanted more challengers,” Stephen Barclay, CEO of the America’s Cup Event Authority, announced on the competition’s official website, “but like all America’s Cup editions, what we remember, what captures our imagination, is the Finals, the actual competition for the America’s Cup.”

Barclay also complained about “the cynicism several columnists and reporters displayed” toward the race and the “deafening” silence from San Francisco’s elected officials, countering that “[n]othing is 100% perfect.”

Perhaps related to the presence of fewer competitors, estimates for audiences declined from about 2 million to fewer than half that. Fewer people in the San Francisco shoreline stands translated into less money for area businesses and the city itself. Back in 2011 in these very pages, District 2 Supervisor Mark Farrell wrote “Next to the Olympics and World Cup, it is considered the largest sporting event in the world, and aside from being an exciting event for San Franciscans, the America’s Cup also comes with the promise of an estimated 9,000 jobs and approximately $1.4 billion in direct economic worth for our city.”

Former San Francisco Mayor Gavin Newsom, who pledged the City would use “creative financing” to make sure it wasn’t forced to pony up from the General Fund, said the waterfront upgrades the city needed to undertake to host the races were “one of the best investments the city can make.”

Recently, Mother Jones magazine’s Maggie Caldwell compiled a list of financial disappointments from sources including the America’s Cup Event Authority and the Bay Area Council Economic Institute. She noted that the positive impact on the local economy was originally estimated to be $1.3 billion, but toward the end of the Cup, it was revised to a not inconsiderable $900 million; the downsized Cup meant the city needed to spend $10 million less than it had expected to spend, but it would reap $11 million less in tax receipts.

It will be a while before final numbers will be available for the financial results of the Cup. But in late-September, Reuters reported that about $16 million of the estimated $20 million for police, public transport, and other city expenses had been raised; and though fewer than one million spectators had been counted in San Francisco, there were also many fans who viewed the races from boats, Alcatraz Island, and other locations in the bay, according to officials from the America’s Cup and the America’s Cup organizing committee.

Estimates for the shortfall due from the city range from $4 to $7 million, which are negligible figures in a town with a budget of nearly $8 billion. And those figures don’t take into account the increased (albeit less than originally hoped) tax receipts. Finally, investments made in bayside piers and other infrastructure do not just pay off for the wealthy people behind the America’s Cup; those improvements remain even after the Cup is over, and San Francisco magazine contributor Melissa Griffin Caen has stressed that they let the city build momentum behind long-standing plans to improve the shoreline.

If the Cup underperformed for the city in terms of attracting in-person viewers and even very many contestants, the Cup still delivered in a number of ways. The most obvious way — the high profile the City got in extensive media coverage around the world — is less a boon for San Francisco than it would be for other communities that are not already among the most famous and beloved tourist towns on the planet. That said, it doesn’t hurt. As for the controversies that bedeviled the teams before the races began, the lawsuits that struck as the competition was underway, and the cheating that was uncovered near their climax — it all might have embarrassed some people, but it also kept the race in a high media profile. And, finally, having fewer teams in the races had a paradoxical benefit in making a sometimes complex sport filled with unfamiliar terms and players a bit simpler to understand, to follow on TV and YouTube or in written reports.

Taking into account the controversies and challenges — not to mention the uneven performance of Oracle chief Larry Ellison’s own team – in the 34th America’s Cup, The Los Angeles Times’ Susan Brenneman sums it up, “Epic failure, right? It’s easy, even satisfying, to boo Ellison and his grandiose America’s Cup vision. Yes, he ordered up the outrageous, expensive AC 72s. Yes, he craved risk and speed, and Simpson died. And yes, his team ‘mistakenly’ attached extra baggies of resin and lead weights to their AC 45s. … Truth is, it may be impossible for overreach, ego or even tragedy to kill the America’s Cup. Its long history is replete with danger, plutocrats, weasel moves, finger-pointing and controversy.”

As much as many people would like to take Ellison to task for his actions and the under-fulfilled expectations for the Cup, the reality is that San Francisco and Silicon Valley and much of America was built by people dreaming big and planning big and boasting big and annoying big; sometimes it works out, sometimes it doesn’t. But it’s familiar to everyone.