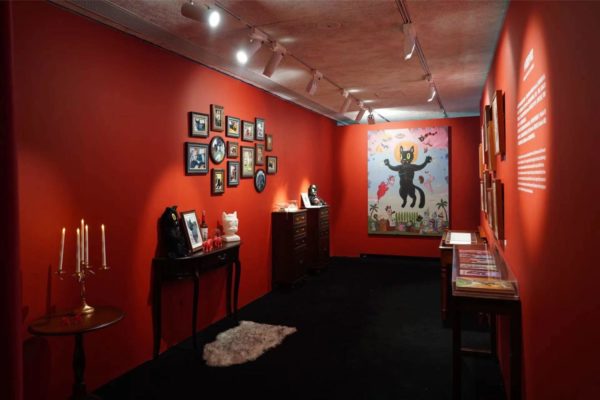 In their latest piece for LA Weekly, arts editor Shana Nys Dambrot writes about the prolific artist Gary Baseman. A Halloween hero without having to say as much, Baseman is known for his artwork depicting ghosts, witches, black cats, ghoulies, ghost girls, fantasy beings, masked and costumed characters, and folk spirits. He is best known, however, for his muse Blackie the Cat and the art from which the feline derived.

“Nine Lives at Beijing’s Wrong Gallery is a multimedia exhibition and installation gathering the adventures and existential lessons of Blackie the Cat, whose long and regal lives were a profound inspiration not only for Baseman but to thousands of fans and followers around the globe,” writes Dambrot. “Nine Lives explores how former stray Blackie the Cat reinvented himself over and over during his 18 years of life, transforming himself into the guide of pop culture icons, spiritual leaders, family and friends, a movie star in his own right, and Baseman’s own alter ego.”