Claire Sprouse, the whip-smart cocktailian and bar manager at The Square, is telling me what inspired her to create a menu of maligned 1970s drinks. She had just finished reading The Square: The Story of a Saloon, a book that chronicles the old Washington Square Bar & Grill, the legendary North Beach restaurant whose hallowed space The Square currently occupies.

“It really brings to life the drinking culture of the old Washbag and North Beach. I think the neighborhood is more tight-knit than any other in the city. I wanted to commemorate that legacy,” she explained.

Sprouse has a keen eye for cultures and their legacy. She studied art history and anthropology in her home state, Texas. She moved to San Francisco to manage Rickhouse, where she surveyed another distinct culture. “We used to call it Businessmen Gone Wild,” she says referring to the rowdy downtown crowd. “When skirmishes broke out, you’d see beefy bro types grappling with bartenders in vests and bow ties,” she says with a smile.

As for the heritage of the Washbag space? Sprouse thought, Why not do a cocktail menu that pays homage to the era celebrated by the book, make it accessible — everyone knows what a White Russian is — and have some fun by sneaking in current cocktail trends?

You’ll likely raise an eyebrow when you note the menu’s Apple-Tini (see recipe below), whose name alone is redolent of poor decisions. Claire ditches the usual neon green ingredients — the pink slime of cocktails — in favor of small-production spirits. The finished drink is crisp with a pleasing citrus taste and depth from apple brandy.

The drink responsible for so many bottles of Galliano lingering on 70s pantry shelves, the Harvey Wallbanger (vodka, Italian bitters, vanilla, orange, lemon), is a highlight. Claire’s version is easy drinking, full flavored, and bursts with citrus peel and vanilla. Swap the vodka for mezcal and you have a Freddy Fudpucker.

One of the most popular drinks is the Claire-ified White Russian (vodka or rye whiskey, coffee, clarified milk, allspice, brown sugar, citrus). Clarifying milk strips away proteins and impurities resulting in a light, clear body. The delectable drink is miles from the dark, heavy versions of the past. It’s what Berber carpet is to shag.

Claire is also planning a special late-night drink menu that will include The World’s Greatest Cosmopolitan and a sherry-based Mind Eraser.

Despite the expertise of her craft, Claire is as unassuming as they come. She hides great skill with understated grace and a friendly demeanor. She’s able to bring together a wide mix of generations — each with varied expectations. A young foodie crowd sits at her bar. So does Jack, a North Beach fixture who literally wrote a book that decries mixology. And then there’s the regular who comes in every day to note how The Square fails to live up to the Washbag. He doesn’t approve of their glassware, so he brings his own. Claire even special-ordered his preferred scotch just for him. His response? He said it tasted better at the Washbag.

I joked with Claire that I would write cheesy titles like “Claire at The Square” or “Sprouse in the House,” but she really is in the house, as in she never leaves. But when she can eek out some time, she likes to gallery hop around the city. You can also catch her at LoLo for their mezcal selection and great hospitality as well as Beretta for pizza, cocktails, and a 1 a.m. closing time.

When Claire moved to San Francisco, only four prized bottles made the journey with her: Suze (a bitter French aperitif only recently made available in the states); rare productions of Tequila Ocho and Siete Leguas; and Havana Club, a contraband Cuban rum. She also admires Siembra Azul tequila for upholding traditional production methods, preserving sustainability of the product, and donating proceeds to local schools.

Shake and strain into a cocktail glass. Top with a fennel frond. 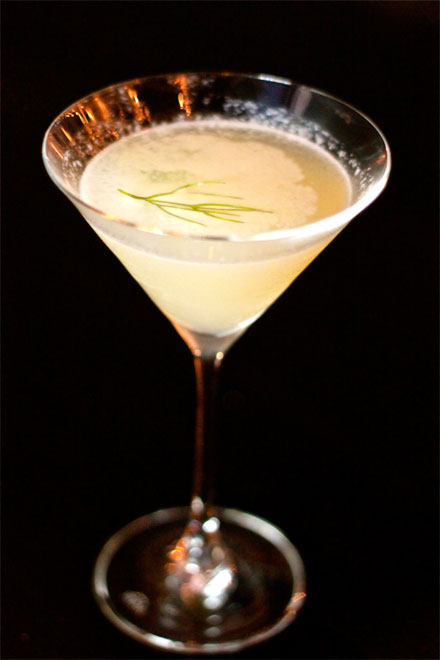 Apple-Tini (photo garrick ramirez)
Tweet
Send to a Friend Print
Garrick Ramirez can be reached on Twitter at @WeekendDelSol or at [email protected].