I love a good cocktail. Waxed mustaches, overwrought ingredients and subsequent Portlandia parodies have done nothing to dissuade me from the city’s current cocktail craze. The boozy alchemy of taking a set of ingredients, coaxing new flavors from them, and creating something greater than the sum of its parts is fascinating … and delicious. When I go out, I’ll sit at the bar chatting up the bartender and taking notes. It’s a great way to learn new tricks and meet interesting folks like Dustin Sullivan.

FUN AT THE BAR

Sullivan is the lead barman at the newly rechristened Fog City. He’s an incredibly likeable guy with a noble credo guiding his work. “The primary role of a bar is to be fun,” he told me. “Anything that gets in the way of that only compromises its essential purpose.” I mouthed a silent amen as he said it.

He noted that his outlook was shaped by a visit to Restaurant Gary Danko. While he found the table service highly efficient but stiff, all the fun was at the bar. There, the Michelin-starred food was served with smiles, fist bumps and joviality. He’s taken the convivial inspiration to heart. Last time I sat at Dustin’s bar, I overheard two patrons inquiring about his outfit. It resulted in him happily sharing with them the measurements of his jeans. 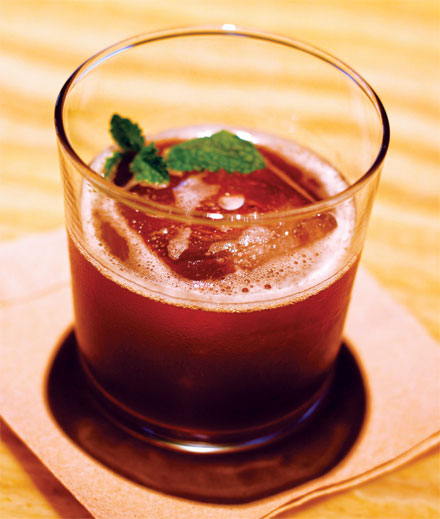 Things get more interesting with the Bad Moon Rising (recipe below), a drink inspired by Dustin’s love of earthy Italian wines such as Barolo. “I wanted to capture the jammy, rich, smoky qualities of the wine,” he said. The cocktail includes a curious ingredient called saba. (I was fairly sure it wasn’t the mackerel I know from sushi menus, but you never know these days.) It’s actually a molasses made from grape must, the stuff left over from wine making. Inspiration comes in many places, and working alongside high-end kitchens certainly doesn’t hurt. One night at Picco (Larkspur), where Dustin previously worked with Fog City’s chef Bruce Hill, he noticed the chefs using saba to top ice cream. He asked for a taste and immediately decided the complex sweetener would find a home in his cocktail creations.

What’s his favorite spirit to play with? Mezcal, the smoky cousin of tequila. He likes how it captures the vegetal qualities of tequila and the smokiness of scotch. You’ll find the latter spirits in his Risky Business (blanco tequila, Aperol, Dolin blanc vermouth, Bank Note scotch, and Angostura bitters) a clean, incredibly balanced take on a Negroni. The drink comes out quick thanks to it being served on tap (premade in batches and stored in a standard soda keg). It’s a welcome trend.

For the Saboteur cocktail (Old Bardstown 4-year-old bourbon, Carpano Antica vermouth, Campari), Dustin utilizes another trend du jour, barrel-aging. I grilled him: Does it really do anything other than look good on a menu? Plenty, it turns out. When vermouth is combined in a barrel with high-proof spirits, over time it starts to mimic Madeira or port. The cocktail becomes richer, bitterness is rounded out, and the barrel imbues oak and vanilla notes.

Bar managers have the dubious honor of being solicited constantly by liquor distributors. I asked Dustin if he’s been introduced to anything of note lately and he quickly reached for a bottle of Spirit Works sloe gin, a craft spirit produced in Sebastopol. The reddish liquor is made by infusing gin with sloe berries, an astringent fruit you wouldn’t want to eat on its own. “It’s deep and rich while still being bright, the sweetness leveled by gentle bitter and tart notes. It’s got balance and complexity,” he explained.

So where’s a guy like Dustin go when he wants to sit on the other side of the bar? “The Marina Lounge is my home away from home. Sully, the owner, is like the awesome uncle that you can’t wait to see,” he says with a smile. And his order? A beer and a shot, naturally.

In a mixing glass, muddle the mint with the sloe gin. Add the other ingredients and shake vigorously. Double strain over a large chunk of ice. Garnish with a mint sprig.