Changing the world by magic: If only we could

When I told my Marina Times editor I was producing the March column by magic with a wave of my newly acquired wand, she probably thought me crazier than usual, but I am here to tell you, I’m as crazy as always. No more. No less.

And, although I sometimes wonder where the writing muse sits in relation to me (is it on my shoulder or is she next door helping my writer friend Donna because I seem to be a lost cause?) and there is a sort of magic in the sheer writing of anything, this newspaper is put out monthly by the hard, everyday work of a lot of good people, with very little wand-yielding that I know of.

There is one thing I am sure of and that is I’m the proud owner of a sparkling new magic wand, for which I owe my husband thanks. Somehow he got it into his head months ago that a visit to The Wizarding World of Harry Potter at Universal Studios in Los Angeles was just what we needed to perk up our rain-soaked souls. The specific reason for the visit? I needed to have my very own wand. Preferably a smart wand! One that interactively played with various parts of Potter World and that we could maybe even program to do things for us here at home.

The Sorcerer’s Apprentice starring, not Mickey Mouse, but me!

The wand that chose moi (Harry Potter lore: The wand chooses its wizard not the other way around), is one of the Professor Minerva McGonagle models (my favorite, Maggie Smith, in the movies), and it is indeed a smart one. That meant as we walked around the store windows in Potter World, I could stand on a brass-medallioned spot, wave my wand in the fashion prescribed by the diagram on that medallion, say the magic word imprinted there, and poof! Something lovely would happen in the store window. For instance, wave the wand, repeat expelliaramus and a quill pen suspended above a blank book would begin to write, presumably at my magical instruction. Different spells and a wand moves for different effects. 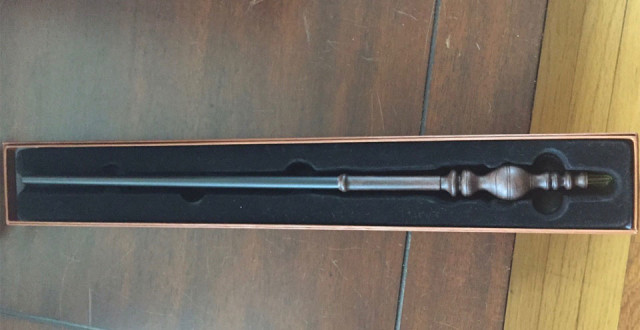 It was fun, and I’m not the only one who thought so. Often surrounded by tribes of tiny humans intent upon creating their own magic, one little boy named John delighted in instructing me how to do it exactly right, obviously having a much older wizarding soul than mine. I appreciated the instruction. His spells always worked the first time around.

So now, if Peter can just use his tech expertise to hook up the wand to various chores around our house, I could have fun waving the wand all day! If there were a way to hook Minerva up to our bed linens, our bed would never go unmade, and laundry would get done in a timely fashion if we could teach my smart wand how to do it. I’m sure my wand would do the laundry far better than I do. And it wouldn’t complain. The wand lives to serve.

Alas, I fear I wish in vain.

And speaking of wishing in vain, lets look at the world we are living in today, specifically, our own country. Misogyny rules Racial prejudice seems to be at an all-time high. Dictatorship seems in the making. Elizabeth Warren is shut down on the Senate for reading Coretta Scott King’s words about the bigot Jeff Sessions. The world is upside down, to quote Hamilton. And despite our best efforts, there seems to be not a single thing we can do about it. Talk about feeling impotent! Hundreds of thousands of e-mails, faxes, petitions, phone calls, postcards, letters, clogging the switchboards at offices all over Washington, and still we get men and the lone woman confirmed for positions they are not qualified to serve, and our “president” seems to be getting his way in everything. Magic is needed, but there seems to be a shortage of that all around.

So, I’m going to sit, make up some spells and magic words of my own, meditate daily with Minerva in hand, and pray — yes, pray — for something miraculous to happen that will wake people up, so we can get the job done of returning our country to its true greatness, a place safe for all, fair to all, and sensible to the fact love and trust get the job done far better than fear, suspicion, hatred, and pandering to our lowest common denominator.

So come on over and sit with Minerva the wand and me, and lets create some magic, pure and simple, because right now it may be our best bet.

Miracle-iamus! Wave your wand in an X position over all presidential photos or MSNBC screenshots, and chant whatever it takes to keep this country as great as it has always been and still is, and to protect it from harm from the inside.

Harry — oh Harry Potter — where are you when we need you?

He Who Shall Not Be Named has passed our gates and is in the castle.

Let’s get him out of here! 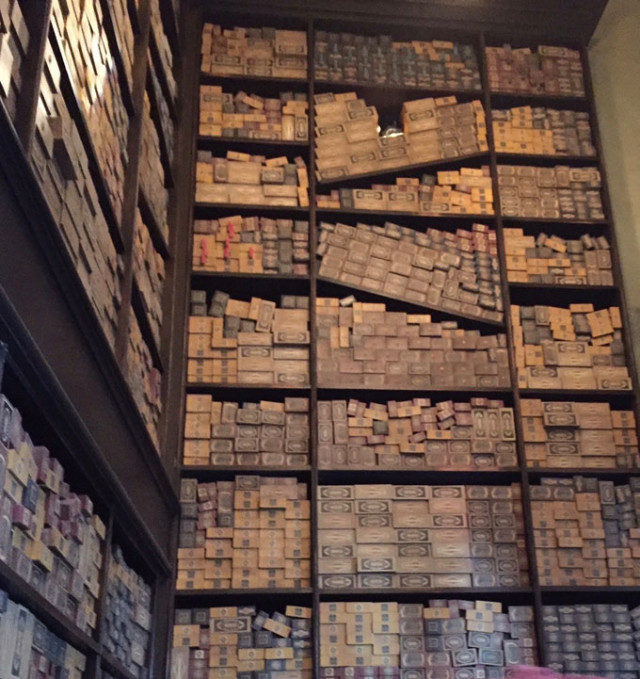 The Wand Shop at The Wizarding World of Harry Potter at Universal Studios
Tweet
Send to a Friend Print
E-mail: [email protected]