Home is where the art is

“Art for sale! Art for sale! “yelled a child’s strident voice, over the calm of our street. Initially reacting like the general curmudgeon that I am when it comes to things that disturb my weekend serenity, I suddenly realized what the kid was so joyously yelling about.

And he or she was telling the world that his or her art was for sale! It was hard to tell whether it was a boy or girl, because a screaming child sounds simply like a child screaming, gender notwithstanding.

Even so, how could I ignore that?

My husband is in theater marketing, so what else is he doing daily (on behalf of the illustrious Berkeley Repertory Theater) except, in his own subtle and sophisticated way, yelling on street corners that he is also selling art?

And what have I been selling my entire life? Yep. Art. Or what I deemed a reasonable facsimile thereof.

So, obviously, I had to go at least look at the art that was so loudly being hawked two doors down from our house. I told my husband I was off on an excursion to perhaps acquire a couple of new pieces, and off I ambled, to see what all the yelling was about.

There, on the sidewalk, in front of the house one down from ours, were Scarlett and her little brother, Jack, behind whom sat their smiling dad, Mr. A. In front of the 7 and 5 year olds were small cardboard boxes set up for display, and on each were items for sale. Both the sister and brother were prolific, though Scarlett had more on display than Jack did. All pieces were colorful, washed in watery tones. As befitting a boy, I suppose, Jack’s had more action in his, whereas Scarlett’s were more what you might call impressionistic. Georgia O’Keefe, move over!

A small sign said “Art for Sale”. No prices were listed.

“Well, what have we here?” I cheerily asked. “Hmmm, looks like some mighty good art for sale, I must say!” Both kids’ faces beamed. I knew that look of creative pride, as often I had plastered that smile on my own face in curtain call after curtain call. I applauded the children’s efforts. They liked that.

“So,” I said, putting on my serious patron face,” how much are you charging for your art? I hope it’s in my price range.”

Scarlett looked behind her to get coaching from her papa, while Jack just kept staring up into my face, with a somber, interested look. This was all new to him. His sister seemed wiser in the ways of the commercial world.

“Scarlett, don’t forget,” her father urged,” we’re giving neighbors a discount, and there’s a discount, too, for members of the ACLU!” He had noticed the membership pin on my blouse.

Focusing on the boss, who was obviously Scarlett, I again asked how much she was charging. She said, forcefully, “Five dollars!”

I wanted to be a good neighbor, and a supporter of the arts, but really? $5? Her father interrupted, with “Whoa, Scarlett, hold on there! That’s a little high, don’t you think?” I think Scarlett knew her customer, is what I think, but I nodded my head in agreement that $5 might be a bit steep. Scarlett quickly adjusted her sights.

“Oh, what I meant was … you can have two pieces for a dollar!” I saw her little brain figuring out the money she’d lost because of her fair father’s advice.

“Now, the hard part!” I said. “How to choose from so much good art? Such different styles and subject matter.” I perused the puckered watercolor pages, picking each up from the makeshift tables. Looking behind me, I saw the old axiom at work: “customers draw customers,” for another couple of neighbors had joined us. “Ooh, I’d better buy quick, or you’ll be sold out before I make my choices!”

I picked up one of Jack’s pieces that had bright yellow all over it in a specific order and said, “This looks like it should be called Donald Duck at McDonalds, is that right, Jack? Is that what it is?” He nodded vigorously. Such a tiny work of art himself; a beautiful child.

“I’ll take it!” Then, turning to Scarlett’s work, I chose a very pretty pastel wash of a floral and rainbow motif.

I then handed a dollar bill to each artist, got a hug and a quiet “thank you” from each, shook the ACLU-friendly daddy’s hand, and went to show off my acquisitions to Peter. My intention? To brighten up my kitchen with them, or gift them to a friend who adores children’s art. Either way, I think I got two bargains that day.

But, I also got a reminder.

And say it loud and proud.

I dedicate this month’s column to Scarlett, Jack, and their smart father. 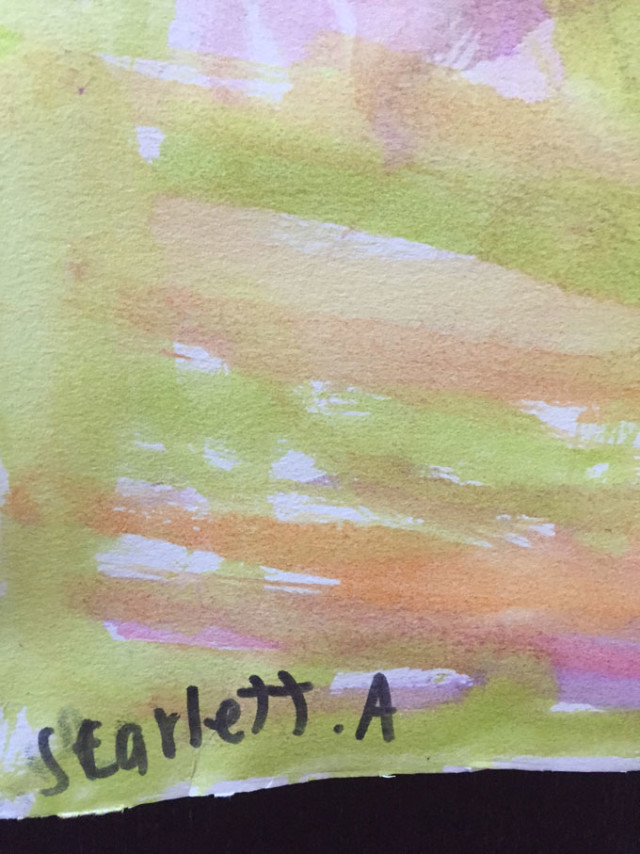 Home is where the art is
Tweet
Send to a Friend Print
E-mail: [email protected]