With the Giants playing like they’re still hungover from the parties of 2010 and 2012, with the A’s having a fine year over in the cracked, concrete birdbath across the bay, there is another local baseball team trying to do things differently, and at a much lower cost to the spectator.

The San Rafael Pacifics are thriving in their second year of independent minor league baseball. They play in clean, repainted, charming, circa-1940 Albert Park. Capacity is about 1,000. As of this writing, tickets are easy to get. And the league is no joke.

Bobby O’Neill, who pitched for the Pacifics last year, is currently playing single-A ball for the Arizona Diamondbacks. Current Giant Sergio Romo played in a previous incarnation of the league before he was signed by the Giants organization. A connoisseur might rate the level of play between single-A and double-A.

But why else would a San Franciscan want to cross the Golden Gate for a Pacifics game, to see the Vallejo Admirals, the East Bay Lumberjacks or teams from Maui or the Big Island? Here are some reasons: lack of fog, warm weather, free parking, $10 online tickets, short concession lines, food that’s about half the price of AT&T Park, the burrito seller, the supervised wiffleball court, very clean bathrooms, abundant foul balls that an eager kid has a decent chance of tracking down, and mingling with the players on the field after the game. A family of four or five can spend what a lone fan might pay at a Giants game.

(In addition, the team from Maui has 5’1″ female knuckleballer Eri Yoshida. She strikes out plenty of hulking, macho hitters.)

“We want to create an environment in which the fan feels transported to community-based baseball of the 1940s and 1950s,” says Pacifics president Mike Shapiro. Shapiro is a former vice president for the Atlanta Braves and the Washington Nationals. He played centerfield at Georgetown University, and had eight games as an outfielder for the Sacramento Nuggets in the independent Western States League in 1973.

As a lawyer and executive in Major League Baseball, he found the work so consuming that, he decided, it took away too much time from his family. He envisioned living in a pleasant community, owning a minor league baseball team, and having lots of time for his family. He chose Marin County.

Now Shapiro’s sons — one, a pitcher for Santa Barbara City College, the other, a football player at Redwood High — both work for the Pacifics, as does Shapiro’s wife.

Shapiro might succeed in becoming the Walt Disney of Bay Area minor league baseball. He talks about fan experience, integrating the team into the community, and putting a quality product on the field. He notes that, in the past, independent leagues and teams have failed when owners either don’t have good business judgment or don’t know how to operate a minor league team. A lot of failure occurs when the owners become “little Steinbrenners” (referring to the late New York Yankees owner) too concerned with manipulating their roster rather than running the rest of the business.

Shapiro envisions the league expanding, establishing a stand-alone Bay Area division to create regional rivalries and cut down on the costs of traveling to Hawaii. (Think the players would rather hang out after games in Antioch, or Maui? Just askin’.)

Right now, one of the Bay Area’s teams, the Lumberjacks, does not have a home ballpark. But they are in negotiation on a so-far secret East Bay location.

Budget-conscious adults appreciate the Pacifics experience. But the most intense magic of an up-close baseball experience happens to kids; they can do a bit of roaming at the park — play whiffleball; take some money to the concession window with their buddies; chase foul balls.

Watch a kid’s eyes light up, their body stand proud, when they get a foul ball. Watch them participate in the on-field seventh inning ball toss. After the game, watch their awe as they talk to a uniformed player on the field and get an autograph. Observe in wonder as video games are momentarily forgotten.

If you like baseball, have access to a car, can bring kids, and want to get out of the fog, check out a Pacifics game. If you go once, you’ll likely go again. There are a bunch of games throughout August, and then there will be playoff games. Check their website (www.pacificsbaseball.com), load up the minivan, and go. 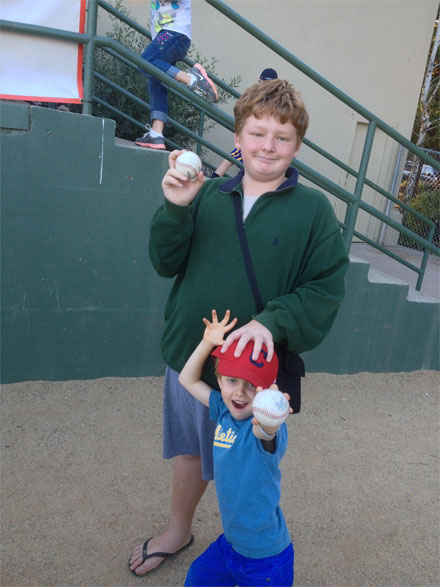 Tweet
Send to a Friend Print
Steve Hermanos is the author of Orange Waves of Giants! The 2012 Championship Season. E-mail: [email protected]