The evening of Tuesday, March 31, I sat in the bar at Original Joe’s in North Beach with my friend, San Francisco Chronicle columnist Carl Nolte, and our wives, waiting for word that the lease allowing for the continuation of my favorite neighborhood saloon-restaurant, Capp’s Corner, had been signed.

Wrangling and squabbling over the lease had been going on for more than a year. At last (we believed) this uncertainty would end. Even as we sat in Original Joe’s, attorneys, landlords, and tenants were meeting to sign the lease. Soon Maureen and Tom Ginella, the longtime proprietors of Capp’s Corner, would join us. We would pop a bottle of champagne and celebrate.

Then the axe fell. Tom called with the bad news. The deal had gone south. Tom told me he and Maureen wouldn’t be joining us for that celebratory champagne. He said more impossible demands would force Capp’s Corner to close Sunday, April 19, the final day the iconic North Beach joint would welcome customers.

As I said in my April Sketches column below, I am an optimist and I thought my beloved neighborhood hangout would be around forever. Not so! Things change, and not always for the better.

In my Sketches column, I don’t like to go out on a limb. My editor will saw it off and I’ll crash. But I am making an exception here because the spirits may be aligned on my side. On yours, too, if you believe in maintaining cherished San Francisco institutions like the iconic North Beach saloon-restaurant Capp’s Corner at Powell and Green Streets.

It appears that the demise of the North Beach landmark will not occur. Exhausting lease problems have gone on for months with unnerving uncertainty and absurd posturing by a voracious attorney. By the time you read this, a new lease will probably have been signed — a happy meeting of minds of both tenants and landlords. 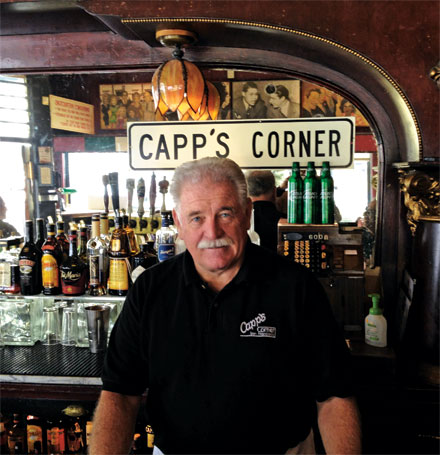 In my last column, I reported that proprietors Tom and Maureen Ginella planned to close the place at the end of March because they couldn’t meet over-the-top demands by the landlords’ attorney, and that only the miraculous intervention of Saint Ignatius could save the joint. By turning to Saint Ignatius, I was referring to the fact that Gov. Jerry Brown dines at Capp’s Corner once a month with his classmates from Saint Ignatius High School’s class of 1955, and refuses to consider upsetting that tradition.

So what happened? In a very personal and skillful fashion, Governor Brown made his position known through moral persuasion. Others like poet Lawrence Ferlinghetti did as well. The governor personally contacted the adversarial attorney and advised him to resolve the situation because even his clients (the landlords) were in favor of an equitable result to the impasse.

LOVING OUR CITY AND ITS NEIGHBORHOODS

The dilemma that faced Capp’s Corner is not an isolated one. Situations like this occur frequently in neighborhoods across the city. All of us can recount stories of unhappy closures of restaurants, bars, and favorite shops. These establishments that add so much vibrancy to our lives frequently lead a fragile existence. Sometimes it’s landlord greed, sometimes not. Frequently landlords are simply being prudent with their investments and their hard-earned savings. We don’t blame them for that. We all love our city and the wonderful historic neighborhoods in which we live and do business.

Old saloons and restaurants contribute a great deal to our urban living. They provide us with social centers in which to interact with our fellows. And that becomes increasingly vital in our age when impersonal computers isolate us in cocoons of silence and debilitating introspection.

BE OPTIMISTIC NOT OPPORTUNISTIC

So it’s increasingly important that we be vigilant in support of what is really our human support system. And when our way of life is challenged, we must stand up and be counted the way Governor Brown, Lawrence Ferlinghetti, and others have done in the case of Capp’s Corner. Sure, we screw up sometimes. We let old places die off for lack of patronage. Remember, too, that we let the 49ers slip away. Sometimes we just can’t make up our minds. We’re contentious. But we seem to be on track for doing something right with the Golden State Warriors.

If you read this column regularly, you know that I am an optimist. I tend to believe people are motivated to do good things — for the greater good of all of us. Many of us optimists rallied around Capp’s Corner. And the good news is we will continue to be able to do that.

This article was revised April 3, 2015 to include the  following: