What if Newsom loses the recall vote? 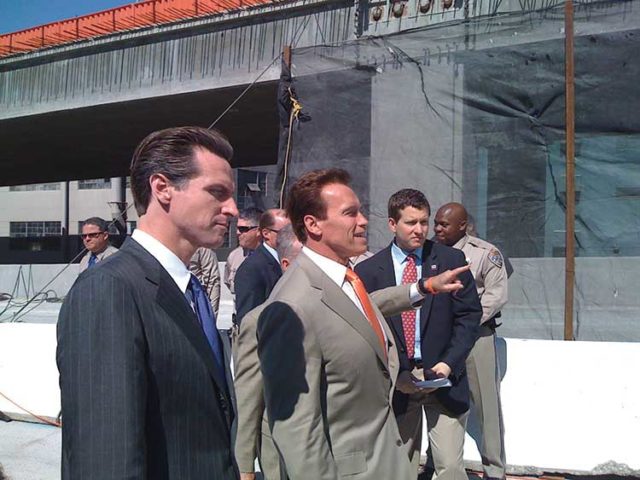 Doing even some light research into recent California gubernatorial politics dredges up a wealth of famous names. Take Gray Davis, for example. He was succeeded in the governor’s office by Arnold Shwarzenegger; he had also served as the state controller from 1987–95 under Republican governors George Deukmejian and Pete Wilson; he had been chief of staff to Governor Jerry Brown in the 1970s, and his predecessor in that role had been none other than future U.S. Attorney General Edwin Meese.

If Gov. Gavin Newsom were to lose his recall election, he could be replaced by a right-wing radio talk show host currently being accused of using drugs and waving a gun at his then-girlfriend, or by the mono-named entertainer Angelyne (making her second run at a recall victory), businessman and 2018 gubernatorial candidate John “I only lost by 24 points” Cox, former San Diego mayor Kevin “I voted for Donald Trump” Faulconer, or even reality TV personality Caitlyn “Did I vote?” Jenner.

Early last month, Gov. Gavin Newsom’s recall campaign team got a jolt. What had seemed like a surefire win looked like it was slipping from their grasp. New polling showed blinking warning lights. Though the majority of respondents opposed the recall, among people who were very likely to vote, the pro-recall forces were larger.

Add to that the August surge of the Covid-19 Delta variant, with its associated strengthening of mandates for masking and vaccinations, and Democrats were starting to seriously wonder if they could lose the governorship of this overwhelmingly Democratic state. Are the predictions of a solid Newsom win about to be proven wrong — including my own prediction in these pages (“The clown car starts to fill up,” May 2021)?

Things might be better than Team Newsom fears, according to Carson Bruno, a former Hoover Institution fellow who is now senior director of Coro Southern California. In August, he tweeted that Gray Davis lost the recall vote 55–45, with a +10 on the Yes vote. “The final Field Poll (considered CA’s polling gold standard) had it @ 57%–39% (Yes +18),” Bruno tweeted. “Currently, the [Real Clear Politics polling] avg. has Yes @ 48.0% to 47.5% (buoyed by a Yes+11 outlier). A similar ’03 No+8 shift is more than enough for No to prevail.”

But what if Bruno and I are both wrong? What if the over-motivated GOP voters turn out in large enough numbers to swamp lazy Newsom supporters, and he is recalled in question one on the ballot and replaced by someone in question two?

EASIEST JOB IN THE WORLD

If President Joe Biden plucked me from obscurity, shipped me over to Afghanistan and granted me broad powers to fix that mess, it’d be a disaster, because I wouldn’t know what to do. However, if Biden somehow made me a Republican governor of California — well, that’d be easy. I wouldn’t have many powers that couldn’t be overridden by the Democratic state legislature, so I couldn’t be blamed for anything.

Any Republican who would succeed Newsom would face a legislature in which Democrats hold massive advantages in both the Assembly and the Senate. Unlike in the U.S. House of Representatives or the U.S. Senate, where the Democrats have razor-thin majorities so any single member of the caucus can create trouble by making demands, statehouse Democrats have so many Democrats their Democrats have Democrats. They can see to it that a Republican governor can accomplish absolutely nothing legislatively, and they can also legislatively tie his hands the way GOP legislatures have done to Democratic governors in Wisconsin and elsewhere.

The governor does have some powers that don’t require legislative approval. For example, selecting people to fill vacated state jobs, such as Newsom has already done with a U.S. Senate seat and the secretary of state position. That alone might stiffen the already-strong resolve of Dianne Feinstein not to retire early.

The governor can exercise some emergency powers, as Newsom has done in ways that frankly fueled the torches-and-pitchforks backlash against him. But if a GOP successor were to do so in any way that resulted in increased Covid cases, he or she would look more like the petulant Trumpian governors of Texas and Florida than a forward-looking governor of the Golden State.

So the Republicans would be best served if they got someone elected who was content to mark time in office while preparing for a general election a little more than a year later. Assuming the Democrats don’t initiate a recall against him before we even get to November 2022.

Think about Schwarzenegger after his initial couple years; he ditched his super-partisan tough guy act, started working across the aisle, became a national leader in fighting climate change, and handily won reelection.

And then was replaced by the ultimate famous name in California gubernatorial politics, Jerry Brown.