Local festivals offer films for a variety of interests

Film festivals are a boon to any movie lover with the time, energy, and cash to spend day after day and hour upon hour in darkened theaters for the express purpose of drinking in what one hopes would be great cinema. That’s some serious immersion in big-screen storytelling, despite the distinct danger of eye strain. But the benefits are palpable for those of us who enjoy the art of the motion picture in its myriad forms.

The Bay Area has more than its share of these annual, carefully curated programs spread out over the calendar year, with the San Francisco Film Festival, Mill Valley Film Festival, and Frameline (the San Francisco International LGBTQ Film Festival) being particularly long-lived and nationally renowned. Over time, more focused fests — like Frameline with its specific theme and coverage — have become destination events for filmmakers and cineastes alike.

This month alone, localites have the opportunity to experience four distinctive, high-quality celebrations that are geared to go beyond the conventions of Hollywood. Already in progress, the 22nd San Francisco Independent Film Festival (S.F. IndieFest) will be running until Feb. 13 at the Roxie Theater, Victoria Theatre, and 518 Gallery. Details can be found at sfindie.com. And the 12th Bay Area International Children’s Film Festival plays on the weekend of Feb. 22–23 at the Chabot Space & Science Center in Oakland. More info is available at baicff.com. As for the other two …

They may speak English, as do most of us in the United States, but the citizens of the United Kingdom are different from their American cousins — culturally, historically, and environmentally. The same goes for the people of Ireland, Australia, India, New Zealand, and South Africa, and all are represented in the 12th edition of the Mostly British Film Festival, dedicated, as ever, to movies made in English-speaking countries outside the United States. This festival offers a foreign perspective in English, accents notwithstanding, while debuting narrative features and documentaries that could eventually find their way into our theaters or onto various streaming services, while just as likely never getting a significant stateside release.

This year’s MBFF will open with the U.S. premiere of Military Wives, a contemporary dramedy about a group of women who take up choral singing when their husbands are deployed to Afghanistan, directed by Peter Cattaneo of The Full Monty fame and starring Kristin Scott Thomas and Sharon Horgan. There will be a Valentine’s Day program of love stories on Feb. 14; an Australian spotlight on Feb.15, topped by the bittersweet family comedy Babyteeth starring Ben Mendelsohn, who is expected to be a festival guest. Other potential highlights should be The Delinquent Season, an examination of passion and family relationships with a cast led by Ireland’s Cillian Murphy and Andrew Scott; Ordinary Love, a gentle, intimate look at a comfortably married middle-aged couple — played by Liam Neeson and Lesley Manville — who must come to grips with an unexpected medical crisis; and Greed, a dark satire about a wealthy fashion mogul (Steve Coogan of The Trip, Stan & Ollie, and Philomena) who throws himself a sickeningly opulent 60th birthday party, which will close the festival. 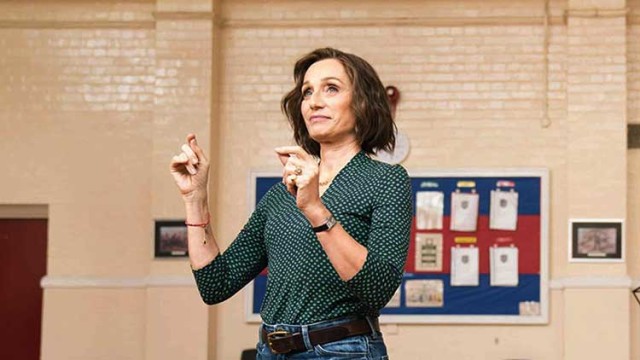 BERLIN AND BEYOND FILM FESTIVAL

Heading into its 24th year, the Berlin and Beyond Film Festival is the foremost festival of German cinema (including entries from Austria and Switzerland) to be presented in the Western Hemisphere. It’s been noted for its stellar guests — among them, actors and directors such as Fatih Akin, Moritz Bleibtreu, Daniel Brühl, Bruno Ganz, Werner Herzog, Maria Schrader, Barbara Sukowa, and Wim Wenders, who have attained fame and respect across the globe — and its selection of provocative and acclaimed movies, including docs and shorts.

Among the more intriguing offerings: The U.S. premiere of What Might Have Been, about a woman who encounters her first love while on a getaway with her current boyfriend; The Collini Case, a mix of courtroom intrigue and murder mystery with its roots in the aftermath of World War II; Cherry Blossoms & Demons, the latest from writer-director Doris Dörrie, following a man in turmoil who travels to Japan in search of answers to life-and-death questions; The Most Beautiful Couple, a tale of attempted revenge after a heinous assault; and the festival closer, Gipsy Queen, the portrait of a single mother struggling to take care of her two children in a hostile world.

Michael Snyder is a print and broadcast journalist who covers pop culture on Michael Snyder’s Culture Blast, via GABnet.net, Roku, Spotify, and YouTube. You can follow Michael on Twitter: @cultureblaster