Honoring The Legacy Of Jackie Robinson 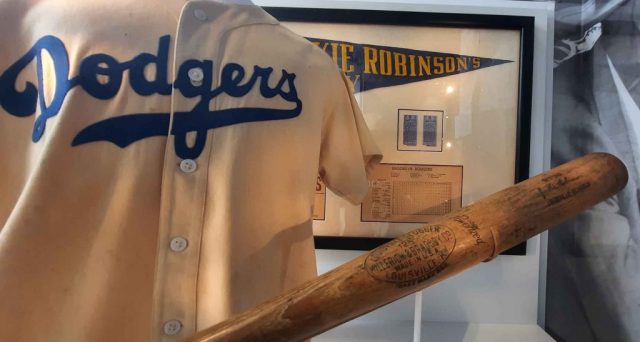 In their latest piece for the Village Voice, Charlie Vascellaro writes about a new museum that has opened in NYC, dedicated to honoring the legacy of baseball great Jackie Robinson. Robinson is known for having positively changed the culture of baseball, propelling America’s civil rights movement.

“Fifty years after his death and 75 years since his pioneering efforts as Major League Baseball’s first African American player—with the Brooklyn Dodgers—Jackie Robinson’s life and legacy continue to have an enduring impact on both the sport and society,” writes Vascellaro. “At the corner of Canal and Varick Streets, in Lower Manhattan’s Tribeca, the newly opened Jackie Robinson Museum memorializes the man who broke through MLB’s color line. Starting at first base, on April 15, 1947, Robinson scored the go-ahead run to help the Dodgers defeat the Boston Braves 5-3—and ultimately became one of the sport’s most societally important players.”