Now, for the action: After legal and political wrangling, America’s Cup is putting on a show at the Marina’s doorstep

People who think that the America’s Cup is an uneventful playtoy of billionaires are given second thoughts when they hear that the large AC72 catamarans used in these races are literally faster than the wind. As everyone in the Marina knows, the wind can be quite fast, indeed.

July saw the competition get into high gear, with the action spread from the courtroom to the waters. Following the tragic death of Artemis Racing’s Andrew “Bart” Simpson on May 9, teams and regulating bodies quarreled over new rules intended to make the racing safer. As reported in last month’s Marina Times, lawyers got involved as teams argued over changes to the boats’ mechanisms that some feared would advantage certain teams over others. At one point, the legal wrangling got so heated that there was concern that one or more teams might pull out of the races, putting the entire competition at risk.

Most of the political fighting over the America’s Cup happened in the runup to the races, including an attempt by former Board of Supervisors President Aaron Peskin to environmental-review the races to death. But city leaders eventually got behind (or at least out from in front of) the event, and the races were allowed to go on.

With the races well underway this summer, visitors have been flocking to San Francisco to take in both the sporting action as well as the sideshows taking place for their entertainment.

Oh, yes, it’s still a playtoy of billionaires, but it’s anything but uneventful.

July’s action has already provided spills and action aplenty. For example, during the Louis Vuitton Cup in the America’s Cup Challenger Series, the Kiwi crew from Emirates Team New Zealand had a breakdown during the third of seven legs. A clip holding the sail to the headstay of the boat failed; the crew took three minutes to detach the sail and dump it overboard, where it was picked up by the team’s chase boat. The Kiwis didn’t have to drop out, however; they were able to continue under the power of their wing foot sail, and they were still able to defeat the Italians of Luna Rossa Challenge by more than two minutes. 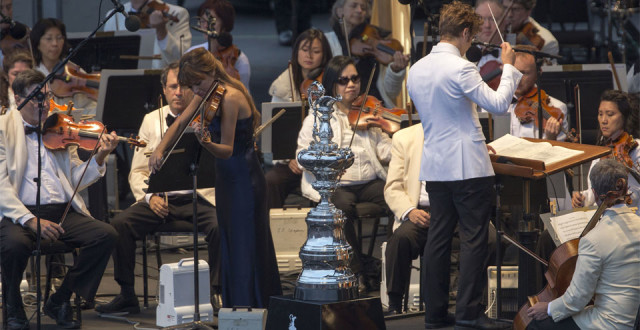 A July 20 concert at the AC Pavillion brought together the SF Symphony and the America’s Cup trophy (Photo: © ACEA / PHOTO GILLES MARTIN-RAGET)

New Zealand skipper Dean Barker said the sail trouble is “one of those frustrating, annoying things. We’ve never ever had an issue with the attachment of the jib before, but as is normal, when you start racing, things like this happen.”

The Italians’ skipper, Max Sirena, praised the work his crew did in improving its performance from the time the two teams last met, on July 13, but “today the Kiwis showed really good speed around the course. We sailed well …, but we need to try and improve as a crew and our boatspeed in the next few weeks.”

Fans will have plenty of time to see if the Italians make that improvement. (See schedule at right). But their competition won’t only be the other teams fighting the winds on the water; it’ll be the wind itself.

Following a late-July race in the Louis Vuitton Cup in the America’s Cup Challenger Series, Emirates Team New Zealand wing trimmer Glenn Ashby said “San Francisco Bay is a fantastic spot to sail. The breeze is in just about every day. This is a wonderful place to sail. The AC72 is a showcase when there’s good breeze.”

“Breeze” is a kind word for the heavy winds that have made this a particularly tricky course to navigate, especially aboard a boat zooming at 40 knots.

Jimmy Spithill, Oracle Team USA’s skipper, even took flying lessons so that he could better understand how to navigate the winds and currents in the bay. Spithill well represents the type of athlete drawn to the America’s Cup competition; he recently told The Commonwealth Club that there certainly were safety concerns about the boats and the bay, but it is “very difficult to go through life completely risk-free.” Athletes of any sport, after all, are trying to do something extraordinary, not ordinary, he said.

Crowds aren’t only coming for the action on the bay. In the Midwest, one mother told the Marina Times she will be heading to California to take in the America’s Cup racing, making a mini-adventure of it. After meeting up with her daughter, she’ll drive up the coast from Los Angeles, sampling wines, boutique hotels, and cute seaside restaurants. They’ll end with an extended visit to San Francisco, experiencing the race and the City in equal measures.

There will be plenty to keep her and her daughter occupied. From souvenir shopping to concerts, the nonracing events have kicked into high gear along the shoreline. In one of the higher-profile events, the San Francisco Symphony gave a July 20 concert at America’s Cup Pavilion, featuring works by Russian composer Tchaikovsky. “There are a lot of things in common between this orchestra and what’s happening out on the water on the AC 72s,” said John Kieser, general manager of the symphony. “The crew of those AC 72s and these musicians depend on split-second accuracy and coordination — it’s a supreme act of teamwork. To be here and be part of that and thinking about what’s going on out on the water is a terrific thrill for all of us.”

So the musicians, just like the athletes, are trying to do something extraordinary. They just have less risk to their lives.

NOTE: There are additional reserve days spread throughout the schedule for the possible addition of racing if necessary