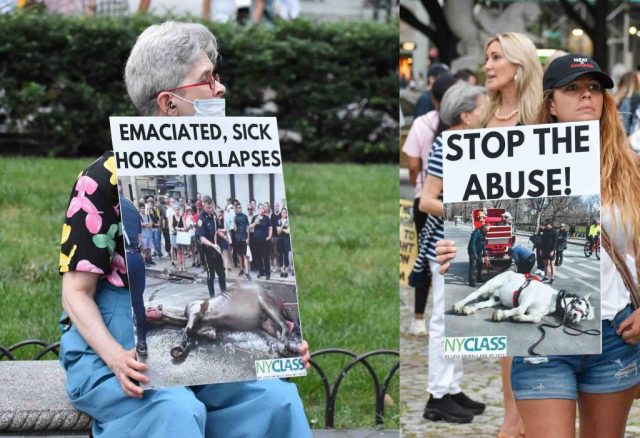 In their latest piece for the Village Voice, writer Tracy Basile reports on the uproar caused by the latest collapse of a NYC carriage horse. The 26-year-old Standardbred gelding, Ryder, was worked till collapse on August 10, prompting an investigation by the NYC Department of Health. It was found that owner-operator Ian McKeever’s brother, Colm McKeever, co-owner of Ryder, had falsified veterinary records, changing Ryder’s age from 26 to 13 on documents he submitted. It was also discovered that the suffering horse was malnourished, underweight, and suffering from EPM, a neurological disease that may indicate poor stable maintenance caused by possum droppings.

“Many of NYC’s carriage horse laws seem to be too little too late,” writes Basile. “Donny Moss, an NYC-based animal rights activist who made the 2007 award-winning documentary Blinders, and still produces short videos on this controversy on his website, Their Turn, told me recently, ‘Enforcement has always been a problem. Lack of will. Lack of resources. At the end of the day, there are things about the industry that simply cannot be corrected…. No amount of regulation or restriction will make the carriage horse industry humane and safe. Even if every driver took the best care of their horse as they could, that wouldn’t change the fact that the industry is inherently inhumane.’”