Quiet before the storm

Its all quiet on the bay as we head into what’s being billed as the “Summer of Racing” with the America’s Cup scheduled for July 4 through Sept. 21. The AC World Series has just wrapped up its second season in Naples, Italy, and while Oracle Team USA’s top skippers Jimmy Spithill and Ben Ainslie stayed here to continue tuning up the AC72s, Tom Slingsby took the helm for Oracle Team USA and was able to deliver an exciting win in the Match Racing Championship in his ACWS debut. He was also able to bring home the overall Season Championship by preserving the commanding lead Spithill had built for the team. The Luna Rossa Swordfish team, with legendary Francesco Bruni at the helm, was narrowly edged out by Slingsby in the final match race. But Bruni battled back to win the final Fleet Race of the series and earn enough points for the overall Naples Series Championship in front of a raucous home crowd that swelled to over 100,000 spectators along the beautiful shoreline.

The AC45s will next return to the bay to begin final training for the Red Bull Youth America’s Cup, which will debut between the Louis Vuitton Cup Challenger Series and the America’s Cup Finals, from Sept. 1 to 4. The boats will be sailed by 19 to 25 year olds, and each team member must be a citizen of the country they will represent. Ten teams have qualified to compete, including Australia, France, Germany, Portugal, Sweden, Switzerland, and two teams each for New Zealand and USA. Meanwhile, the AC72s continue to amaze as they stretch the boundaries of speed under sail with each new trial, both here on the bay with Oracle Team USA and Team Artemis, and at the other end of the globe down in Aukland, New Zealand, where Team New Zealand and Luna Rossa are testing their teams.

Until July rolls around, there is still plenty of racing on the bay right along City Front, starting with the Saint Francis Yacht Club’s (St.FYC) Wednesday Night Series on May 1, followed by their Kiteboarding Series on Thursday, May 2 and Windsurfing Series on Friday May 3. The Golden Gate Yacht Club gets the month rolling with their Friday Night series also on May 3. While you can probably catch racing on the bay nearly everyday of the week during May, a couple of the largest regattas are starting on the first weekend in May on the 4th and 5th, with the Yacht Racing Association’s (YRA) Great Vallejo Race expecting 250 boats to be entered and the St.FYC’s Elvstrom Zellerbach race expecting 65 entries right along City Front.

But for a real contrast to the upcoming America’s Cup, one needs to look no further than the annual Wooden Boat Racing Association’s Woodies Invitational hosted by the St.FYC starting Friday, May 31. The Woodies features sleek International One Designs, Knarr, and Birds along with the stouter Bear and Folk boats. These classic wooden boats can be seen moored in front of both yacht clubs in the West Marina throughout the weekend as they gather for this annual regatta and celebration. As we take note of Small Business Week in the City, of particular note are the Bear boats, having been designed and built right here in San Francisco starting in 1931 while the economy was still reeling from the Great Depression, by the Nunes Brothers boatyard. Ever the entrepreneurs, the Nunes’ set out to design an economical sail-away boat for the rough waters of the bay, and succeeded so wildly that by the mid-1950s the Bear was the largest single design fleet on the bay. As the story goes, the first boat was launched on a typical blustery and foggy summer day with all the pomp and circumstance the launch of a new boat design deserved. The commodore of the St.FYC, Cliff Smith, remarked “That is a bear of a boat!” A young Ernie Nunes replied “Good, let’s call it a ‘Bear’ class boat” and a new fleet was named.

While the fleet at one time numbered 69 boats, it has since dwindled in numbers over the years as time and tide – and economic circumstances – take their toll. However, Boat #1, the Merry Bear, can still be found on display in the S.F. Maritime Museum. So before the hi-tech carbon-fiber wing-sailed hyphenated boats arrive in force, take a trip down memory lane, enjoy a piece of San Francisco history while at it, and check out the Woodies the end of May.

For up-to-date local race information on the Bay, visit www.yra.org, www.ggyc.com and www.stfyc.com. To purchase tickets (now on sale) or learn more about the America’s Cup go to www.americascup.com and visit oracle-team-usa.americascup.com to follow Team USA’s progress. 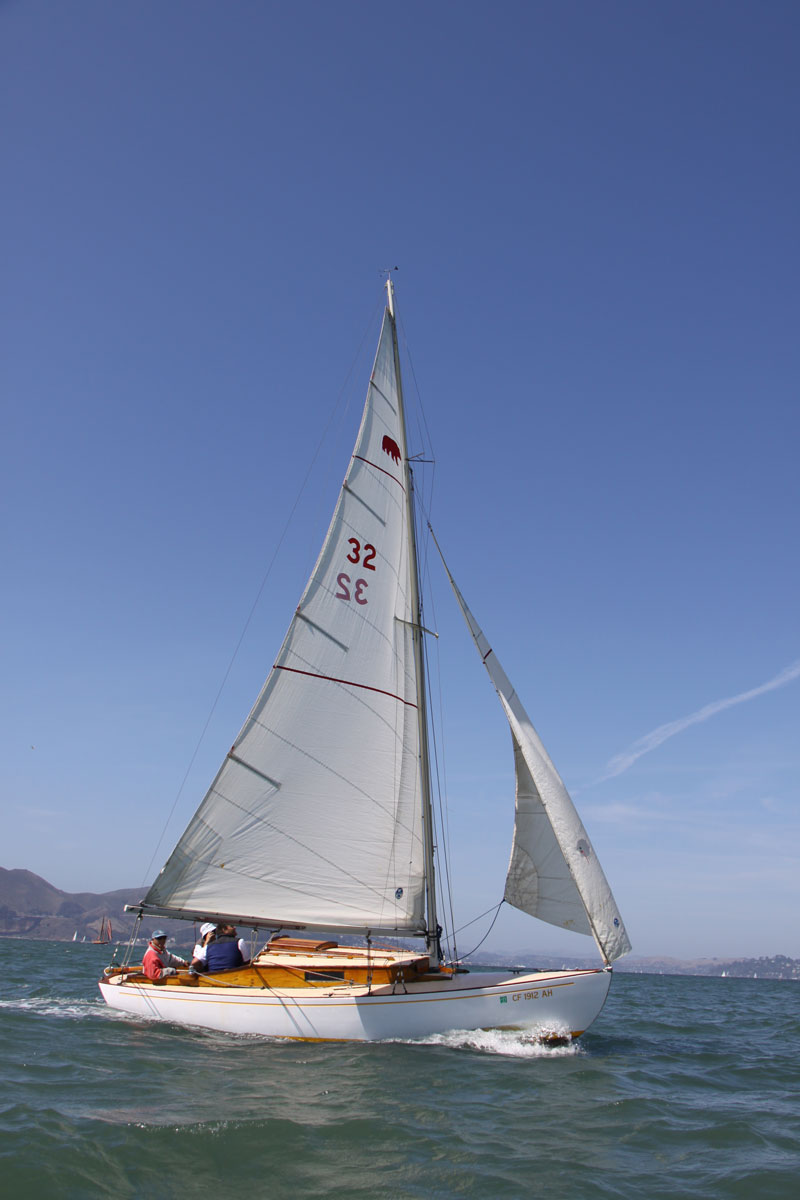 More On the Bay »