The battle on the bay

The “Summer of Racing” is scheduled to kick-off on July 5, now with a time trial featuring at least three of the teams instead of the originally scheduled Fleet Race; but the future of the Louis Vuitton Cup challenger series may yet turn into a legal battle over the new rules.

This continues to be part of the fallout from the tragic death of Andrew “Bart” Simpson when Artemis Racing’s AC72 boat capsized during a training run on May 9. Since then, the organizing committee released a report with 37 safety recommendations to be implemented with the goal of providing safer sailing for the crews. Though the four participating teams – Defender Oracle Team USA, Challenger of Record Artemis Racing (Sweden), Luna Rossa (Italy), and Emirates Team New Zealand – have agreed on the majority of those safety measures, the adoption of a rule change regarding elevator rudders has become a real sticking point, with the Italian challengers threatening to go to court over the proposed rule change. Any legal action would be heard before the New York Supreme Court, which has jurisdiction over the America’s Cup, and could delay the start of the Louis Vuitton Cup Challenger Series scheduled for July 7.

The elevator rudder in question provides stability as the boats rise out of the water on their foil. The original rules allowed for the rudder to have a fixed winglet, giving the boat a second point of control over their pitch, much like the rear wing on a plane. The newly proposed rule change would allow that winglet to be adjustable, much like ailerons (movable flaps) on a plane’s wing, providing even greater control while foiling. Though that might seem like a fine improvement, most teams have not developed or practiced with this type of equipment. Luna Rossa sees the implementation of this rule change as a benefit in performance, not safety, as teams have completed hundreds of hours of testing without them and most without incident. 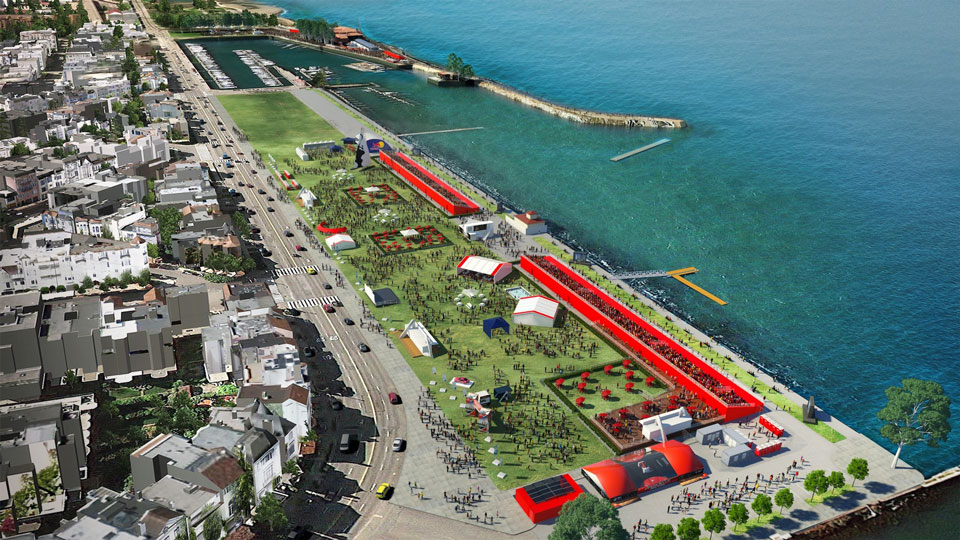 With the challengers engaged in competition from July through the second week of August, just maintaining their boats will leave little time for new research and development of similar equipment. This could be seen as putting Oracle at an advantage, because they would be free to implement such an equipment change. But as Regatta Director Iain Murray told the San Francisco Chronicle, “The safety recommendations were made in isolation and without influence from any stakeholder, but after considerable consultation with the teams and sailors. I believe all 37 of these safety recommendations … are important and necessary.” Ultimately, the new safety rules will be adopted as part of the formal permit application to be approved by the Coast Guard. But with respect to the elevator rudders, Chief Petty Officer Mike Lutz said “We won’t go into how they build their vessels; that’s up to the America’s Cup.”

While the elevator rudder remains a major issue, other changes regarding the wind speed limits under which it is safe to hold the event, as well as the current rule allowing teams to begin racing in the challenger’s series at their discretion, have resulted in some mudslinging between challengers. As Team Artemis continues to rebuild their capsized boat and has just launched their second boat for testing, they announced they would not begin racing until fully prepared and confident in their teams’ safety, possibly missing the round robin races in which the teams earn points for ranking in the semifinals. That will effectively reduce the number of race days in June to five days total. But with only three challengers, Artemis can still be in the semifinals without competing in any of the round robin races. This caused Emirates to fire a verbal shot across their bow, with New Zealand’s Managing Director Grant Dalton in a June 8, 2013 article in the New Zealand Herald, saying “So the whole thing is now geared to the needs of the weakest common denominator.”

In reality, missing any competitive racing not only puts the team at a disadvantage in terms of ranking, but they also lose valuable opportunities to train and test their team and equipment under race conditions. That is exactly why there are set times for the defender to have access to the race course, giving Oracle an opportunity to prepare for their defense with Ben Ainslie and Jimmy Spithill squaring off in the two Team USA boats. Artemis Racing responded to the Kiwi’s slight with a press release of their own stating, “We are doing our best to recover and our target is to be ready for racing in the Louis Vuitton Cup’s semifinals on August 6, if not earlier. In the meantime, the race schedule should remain unchanged and the derogatory analogies should be left on the dock.”

Meanwhile, amidst all the posturing in this high-stakes event and the drama of the past few months, the America’s Cup Event Authority has quietly continued its fundraising efforts and has apparently closed the gap on their commitment to the city. The city’s own budget has yet to be revised to reflect the fewer racing days and associated costs, which should mean that there will be no shortfall or expense to the city. Though overall revenue – originally projected at $1.9 billion – might also be less, the event will still be bringing a huge economic lift to the city, as even now the Village is hosting sold-out concerts and upcoming events will continue to bring in revenue. Marina residents not endeared to the America’s Cup will also see a shorter span of grandstands along the Marina Green as well as fewer race days.

In a related story, the National Marine Manufacturers Association just released new data that reveals the Bay Area’s boating economic value. As boaters rev up for the start of summer, the latest statistics on the boating industry in the Bay Area show a total annual economic value of recreational boating to be more than $958 million while providing over 7,800 jobs.

So as we prepare (or not) for the Summer of Racing, only one thing is certain: It’s going to be some fast, exciting racing on the bay … whenever they do begin!

For up-to-the-minute news on the 34th America’s Cup, visit www.americascup.com or www.oracle-team-usa.americascup.com to follow Team USA’s progress. You can also find more sailing info at our local yacht club websites: www.ggyc.com and www.stfyc.com.

More On the Bay »