Some time back, I was at my Russian Hill abode with friends to watch a VHS tape of a 1974 buddy movie about two San Francisco police detectives who don’t play by the book. (Yes, a VHS tape. It was that long ago.) Freebie and the Bean was pretty entertaining, albeit dated in its fashions and lack of P.C. More significantly, it was evident from the outdoor scenes that it was genuinely filmed in our fair city.

The titular cops, played by James Caan and Alan Arkin, were constantly bickering when they weren’t violently violating the rights of suspects or getting beaten up themselves. So they’re on the trail of a crime boss when they pull up to a street corner with a vacant, overgrown lot and engage in their usual chicanery. I immediately realized the street corner was my own — a few steps from my front door. I grabbed the remote, paused the video, freezing on a crowd standing right in front of my place, and saw my landlord among the onlookers observing the cops in action. The film was shot a number of years before I moved to the neighborhood — the vacant lot is now a stack of condos, and my landlord has since moved on, but my block and my apartment building were immortalized forever in a motion picture.

With its unparalleled beauty and exotic mélange of people, San Francisco has forever been a favorite locale for all manner of movies: romances, crime thrillers, ebullient comedies, psychological dramas, science-fiction, action flicks, period pieces, and more. For those of us who are fortunate enough to live here, it’s flattering — and it’s also odd to see the places where we live, work, dine, and socialize become mythologized or celebrated on film.

It’s dandy to have San Francisco serve as the backdrop (or supporting player) in what now amounts to scores of movies, but we need to differentiate between those projects that do a few establishing shots for setting or backdrop and those that actually bring their cameras to town, grab footage, and even film interiors within the city limits. Although the 1961 movie adaptation of the musical Flower Drum Song is set in San Francisco’s Chinatown and makes good use of bustling Grant Avenue, the majority of it was filmed on a studio lot in Universal City. The Maltese Falcon — the hard-boiled 1941 masterpiece with Humphrey Bogart in his quintessential role as private eye Philip Marlowe — launched countless visits to one of its crucial destinations, John’s Grill on Ellis Street, even if the feature was primarily made at Warner Bros. in Burbank. On the other hand, Mrs. Doubtfire did much of its principal photography in the city, to the delight of the comedy’s star and longtime Bay Area citizen, the late Robin Williams. The house at 2640 Steiner Street, where the onscreen family lived, is treated like a shrine today with fans showing up to take photos and, presumably, pay their respects to Williams. 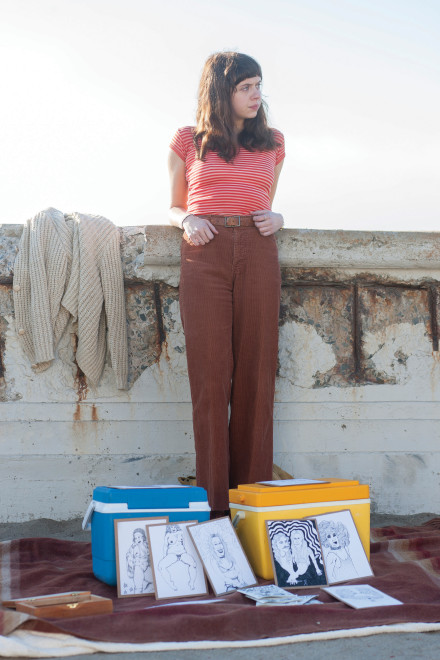 Bel Powley as Minnie Goetze in The Diary of a Teenage Girl.
Photo: Sam Emerson, Courtesy of Sony Pictures Classics

The Diary of a Teenage Girl, a winsome coming-of-age movie of more recent vintage (2015), was definitely a San Francisco production. I know firsthand because I approached my favorite cafe, the Royal Ground on Polk Street, late one afternoon and noticed a number of trailers parked out front. The production was shooting a scene with actors Kristen Wiig and Alexander Skarsgård inside the Royal Oak bar, across the street. From my cafe window seat, I could see director Marielle Heller, crew members, and the performers as they went in and out of the Royal Oak. Reviewing the finished product months later, I was excited to see how much the movie made use of various scenic spots throughout the city: the Lower Haight, Golden Gate Park, the Tenderloin, the Mission, and elsewhere, including Russian Hill.

The movie industry and its leading filmmakers have continued to show love for San Francisco, from Alfred Hitchcock’s 1958 drama Vertigo to Woody Allen’s 2013 drama Blue Jasmine; from Don Siegel’s 1971 police procedural Dirty Harry to John Schlesinger’s 1990 thriller Pacific Heights; and from the wild car chases over local hills, which defined the 1968 Steve McQueen action classic Bullitt, to the wild car chases over local hills which, on the basis of its trailers, will be a rollicking part of this month’s Marvel superhero romp Ant-Man and the Wasp.

As for my personal connection to San Francisco’s cinematic history, I can add one more anecdote. In the mid-’80s, I was dating a young woman who financed her artistic pursuits with a job as a hostess at a legendary, fancy, now-defunct restaurant (one that figures prominently in Vertigo as it happens). When she first invited me back to her place, I discovered she lived in the sleek Art Deco building at 1360 Montgomery Street on Telegraph Hill. It turned out to be the same apartment where Lauren Bacall’s character lived and gave shelter to Humphrey Bogart’s character in the 1947 film noir Dark Passage. The movie only utilized exteriors of the façade, with the interior reproduced on a Hollywood sound stage. But that didn’t lessen the romance of embracing my companion in the Dark Passage apartment — the two of us gazing out her window at the Bay below as an illuminated yacht made its way under a moonlit Golden Gate Bridge.