After a marathon viewing of all eight episodes of the charming and clever comedy series Mozart in the Jungle, I have one more reason to acknowledge the astonishing rise in quality on the television front. With the growth of high-end serialized narratives (mini, maxi, or ongoing, open-ended series), the one-time boob tube is giving the movie industry a serious run for its money. Plus, the shows, like so many feature films, are now available on demand in our homes and over our portable devices, which means … binge watching! You can turn HBO’s first season of True Detective (an eight-hour run featuring, by the way, a couple of bona-fide movie stars Matthew McConaughey and Woody Harrelson — taking the short-run video route) into the home entertainment equivalent of sitting through all four operas in Wagner’s Ring Cycle over the course of a day.

Consider that the proliferation of platforms makes the consumer experience even richer, especially when it approaches the realm of what has been dubbed transmedia storytelling, wherein a saga unfolds in various pieces or chapters over a range of outlets. This is epitomized by the Marvel Comics cinematic universe — with its string of superhero movies spotlighting The Avengers, Iron Man, Thor, and Captain America — and its television components such as Agents of S.H.I.E.L.D. and Agent Carter on a broadcast network (ABC) and the upcoming Daredevil and A.K.A. Jessica Jones on a streaming service (Netflix) — as well as video games, online webisodes, and tie-in comic books. 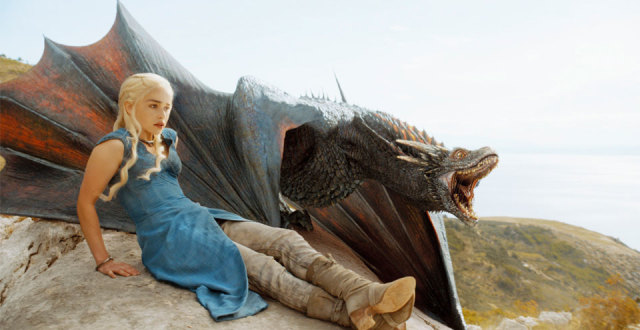 The cinematic Game of Thrones returns with its fifth season on April 12.

The writing, production, and acting on various programs being transmitted could honestly, flatteringly be called movie quality. The sweeping, epic art direction on the annual dozen or so installments of HBO’s sword, sorcery, and political intrigue extravaganza Game of Thrones is enough to make Cecil B. DeMille jealous as he peers down from that big Soundstage in the Sky. And the talent involved — in front of and behind the lens — is impressive. When a Kevin Spacey or a Jeremy Irons actively seeks a TV series or when someone with the pedigree of a Neil Jordan or David Fincher gets in bed with HBO or Showtime, you know the terrain has changed.

Thanks to the expansion of cable TV and the British model of the 6- to 13-episode series, we’re getting shorter runs with much less filler than one would find in the standard 20-plus episodes per season, which has been the norm on American networks for decades. Some of it is due to U.S. channels actually running various shows from the U.K., Ireland, France, and Scandinavia with success. Or the powers that be on this side of the Atlantic are deciding that quality does trump quantity. And all of that is reinforced by the rise of the streaming services as an alternative to the networks — and the premium cable channels.

Thus, the delights of Mozart in the Jungle, set in modern-day Manhattan’s classical music scene featuring a stellar cast led by British perennials Malcolm McDowell and Saffron Burrows and the buoyant Mexican movie star Gael Garcia Bernal. Eight installments. Witty. Sophisticated. Fun. Source? Amazon’s original series platform. The Big Bang Theory keeps running on CBS with almost two dozen episodes a year, but those knee-jerk multicamera sitcom beats and that laugh track can really get to you after a while. The pointed political satire of Veep on HBO (which has won trophies for its lead actress Julia Louis-Dreyfus) and the inside-the-TV-business hysteria of Episodes (with Matt LeBlanc of Friends hilariously deconstructing his celebrity image) come in under 10 half hours a year, and offer consistent rapier wit. You’re not left bored; you’re left craving more.

Or, if you’re lucky enough to have seen the knockout BBC drama The Missing when it aired on Starz, you already know how absolutely gripping it was. If not, seek out this eight-episode time-shifting nail-biter about a little English boy who disappears while on vacation with his parents in France. The actors — most notably, James Nesbitt as the father, Frances O’Connor as the mother, and Tchéky Karyo as a retired French detective — brought uncommon honesty, depth, and pain to their roles, enhancing the mystery and, as is the case with a great series, viewer attachment and empathy. Unlike many movies, a multiepisode series has the time to truly build characters and create bonds with its audience.

So a rabid, burgeoning group of admirers waits upon every season of Downton Abbey, the plush, hoity-toity large-ensemble soap opera about the British aristocracy in the early 20th century. Coming from ITV in England, it boosts PBS pledges with every fleeting handful of installments. The fans dote upon BBC America’s Orphan Black, a weird and wonderful sci-fi show about a beleaguered sisterhood of disparate, emotionally (and sometimes physically) damaged clones — all played by the same fantastic young actress, Tatiana Maslany, in a weekly tour de force.

Water-cooler talk about garden-variety CSI-style police procedurals running on the Big 4 broadcasters has been replaced by discussion of Netflix’s award-winning political drama House of Cards (inspired by the BBC series of the same name and powered by the swaggering Mr. Spacey). Or people are debating the latest brief U.S. run of ITV’s Broadchurch — a mystery series that was ignited by a small town murder in its first go-round and became richer, more complex and disturbing in its second season as it dealt with the aftermath of the heinous crime at its heart. (A remake of Broadchurch dubbed Gracepoint was shot in the U.S. for FOX with the same lead actor, Scotland’s David Tennant, former star of another current TV phenomenon, the long-running British fantasy series Doctor Who, doing an American accent, but it didn’t catch on like the original.)

The French develop the chilling supernatural drama, The Returned, about loved ones coming back from the grave, seemingly intact, and throwing a village into a fearsome crisis, and it spawns an American remake. The Bridge — a taut murder mystery from Scandinavia — follows the route taken by the Danish series The Killing and is reworked for the U.S. market with movie actors Diane Kruger and Demián Bichir as its leads.

It’s more than a trend. It’s a new Golden Age of Television, and it appears that it’s here for a while.

Tweet
Send to a Friend Print
Michael Snyder is a print and broadcast journalist who covers pop culture on KPFK/Pacifica Radio's David Feldman Show and Thom Hartmann Show and on Michael Snyder's Culture Blast, available online at GABnet.net and YouTube. You can follow Michael on Twitter: @cultureblaster