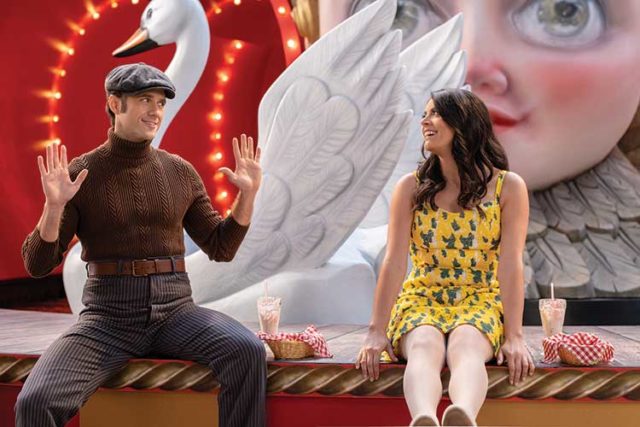 It’s no exaggeration to say that we could use some laughs in times like these — in fact, anytime at all. Beyond the ostensible healing power of laughter, there’s also the welcome distraction of good comedy as the tedium or challenges of everyday existence try to grind us down. So forget your troubles for as many half-hours as needed with these fresh, serialized, music-oriented sitcoms, featuring a slew of amusing tunes and various contributions from alumni of TV’s long-running sketch fest Saturday Night Live.

Schmigadoon! tips its hand with its title — a nod to the fanciful Broadway classic, Brigadoon, wherein two American-as-apple-pie fellows stumble upon and subsequently have their lives changed by a mystical Scottish village that appears once every 100 years for a single day. Evidently inspired by that plot, Schmigadoon! features a pair of normal modern folks, doctors-in-love Melissa and Josh, finding themselves in a magical town (named, yes, Schmigadoon) while on a woodland retreat to repair their ailing relationship. Our troubled twosome, played with verve and offhand sarcasm by Saturday Night Live’s Cecily Strong and Key & Peele’s Keegan-Michael Key, can’t find a way out of this strange enclave where the trees are plastic, the vistas look like they were painted on a scrim, and the townsfolk are an all-singing, all-dancing, all-over-emoting stereotypical throwback to a good old-fashioned musical.

By going beyond traditional situation comedy structure and premises and doing its own thing, Schmigadoon! treads a path similar to that of The Good Place, the splendidly witty and genuinely sincere series about the afterlife. The smug and snarky aspects of Schmigadoon! suggest that the emotional resonance of The Good Place isn’t the goal here. Instead, the focus appears to be on humor derived from a pair of neurotic 21st century professionals clashing with the hoary attitudes and artificiality of the Schmigadoon locals who spontaneously burst into song-and-dance routines, present grandiose, melodramatic behavior, and espouse dated usually sexist mores.

The conceit here is that Melissa and Josh are trapped in Schmigadoon like it’s The Twilight Zone and can’t return to the ordinary world until they find that prize idealized in countless fairytale narratives (and musicals) — true love. This info-dump is courtesy of a leprechaun who explains why there appears to be no way back for the duo. The leprechaun is portrayed by no less than comic actor Martin Short who has put in time on the Great White Way with a starring role in The Goodbye Girl and did a season of SNL in the 1980s. Short is just one of the theater vets in the cast, alongside Alan Cumming (Cabaret) as the closeted Mayor Menlove and Kristin Chenoweth (Wicked) as a prudish scold married to the town’s preacher, plus Jane Krakowski (Nine) and Ariana DeBose (the upcoming film remake of West Side Story). They each bring that Tony Award sheen to the material, which embeds wryly relevant lyrics into song structures that recall the likes of Oklahoma, The Music Man, Finian’s Rainbow, and of course, Brigadoon.

With ex-Disney Channel ingénue Dove Cameron playing a teen temptress, former SNL cast member and Portlandia star Fred Armisen as the preacher, and a crew of less familiar but reliable supporting players, the six episodes of Schmigadoon! deliver a canny takedown of archaic and contemporary romantic notions, wrapped in a takeoff of Broadway musicals. Strong has a strong voice, Key can certainly stay in key, and they handle their singing duties with as much aplomb as they navigate their characters’ banter. Schmigadoon! was created by Cinco Paul and Ken Daurio, the writers behind the wildly popular Despicable Me animated features, and directed by Barry Sonnenfeld, best-known for helming Get Shorty and the Men in Black movies. And SNL head honcho Lorne Michaels is one of the executive producers. It’s a parody, and it’s a rom-com. But mostly, Schmigadoon! is a lot of fun.

Schmigadoon! is available for streaming on Apple TV Plus.

The Saturday Night Live connection to Girls5eva is primarily on the development side —it’s coproduced by SNL mainstay Tina Fey, who created and starred in 30 Rock, the brilliant burlesque of the TV business. Now, Fey and her partner Robert Carlock are overseeing creator Meredith Scardino’s Girls5eva, an astute, dependably funny, occasionally profane series about show business, especially the pop end of the music industry, women’s relationships, aging, and adapting.

Presumably, Girls5eva was a girl group in the late 1990s that had a single hit song then broke up, sending its five members in vastly different directions: Dawn became a wife and mother who worked in her brother’s Queens restaurant; Summer married a doofus from a boy band and tried to live the high life as a social media star; Wickie set out on a solo career that imploded; Gloria became a dentist, married her girlfriend, and ended up having the first same-sex divorce in New York; and Ashley died. Girls5eva adopted their unique name, because, as their theme song goes, they planned to be “famous 5 eva” because “4 ever’s too short.” It wasn’t to be until the four surviving Girls reconnected after a hip-hop star used a sample from their only successful record on his latest release. The Girls decide to revive the group after they’re asked to vocalize the sample in person for the rapper’s appearance on Jimmy Fallon’s late-night talk show.

Inspired by their moment back in the spotlight, they contend that the only way they can be stars again is to record new music and wangle an invitation to perform at the high-profile Jingle Ball concert. That means dealing with their predatory one-time manager, an eccentric best-selling songwriter, beleaguered or unsupportive spouses, pranksters, and others. Along the way, Girls5eva offers clever shots at youth culture, contemporary parenting, urban classism, and the daunting generation gap that former pop stars have to traverse decades after their heyday. The fake vintage footage from MTV’s TRL with Carson Daly and CNN’s Larry King Live is a hoot, as are the words to Girls5eva tracks such as “Dream Girlfriend.”

The program’s biggest assets are the four lead actresses, two of whom — Sara Bareilles and Renée Elise Goldsberry — are acclaimed singers. Bareilles (Dawn) composed the music and lyrics for the musical Waitress and is set to star in an upcoming Broadway run of the show, and Goldsberry (Wickie) was in the original casts of Hamilton and The Color Purple. They bring legitimacy and pizzazz to the droll Girls5eva songs, while having the comedic chops to work well with more accomplished jokers Busy Philipps (Summer) and Paula Pell (Gloria). Although guest shots by Fey, Stephen Colbert, and Vanessa Williams provide added value, the pop culture savvy dialogue, unexpectedly surreal gags, and the Girls themselves make this the fictional comeback we never knew we wanted and needed.

Girls5eva is available for streaming on Peacock.