‘Spider-Man: No Way Home’ is where the heroic heart is 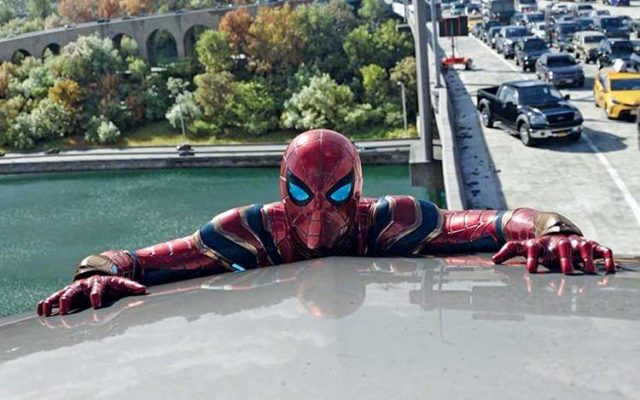 There's no such thing as too many Spideys in No Way Home. Photo: Sony pictures
by Erin Maxwell

Spider-Man: No Way Home is the third installment for the Tom Holland-led webslinger saga, but it’s more than just the latest chapter in the Marvel Cinematic Universe. The highly anticipated and already high-grossing film is also a heartbreaking tale of loss, an action-adventure sci-fi romp, a homage to previous Peter Parkers and his foes, and a powerful adhesive cementing different aspects of the Marvel Universe together, be it Disney (Doctor Strange), Sony (previous Spidey films), or Netflix (Daredevil). And on every front, it’s successful.

When we last left poor Peter Parker, it seemed the high school senior just couldn’t catch a break. Already having difficulty trying to juggle his alter ego with his teenage angst, Peter now has to deal with being outed by the muckraking J. Jonah Jameson (who should forever be played by J.K. Simmons). Peter’s life is in shambles, causing him and his Aunt May (Marisa Tomei) to live on the lam as he becomes the friendly neighborhood scapegoat. There is only one solution: magic. But after a visit to Doctor Strange causes a spell to go awry, Peter now has to deal with a handful of Spider-Man’s greatest foes from previous franchises.

Once again, Marvel taps into the concept of the multiverse as a means to propel stories and characters into the next phase of the MCU. Initially using Disney Plus shows to help audiences understand upcoming theatrical storylines, No Way Home cultivates the small screen homework given to audiences over the pandemic.

And it’s here that the MCU is revolutionary in its storytelling. Thanks to No Way Home and its use of the multiverse, Marvel has morphed into a place where characters from competing franchises are not just valid, but part of the larger picture.

The MCU version of Spider-Man is unique in that it doesn’t spoon-feed audiences yet another origin story. After all, fatigued fans can only watch Uncle Ben bite the dust so many times. Marvel knows that a good portion of its current ticket-buying audiences is already familiar with the material, thus it pushes its own story, one without murdered relatives, over-the-top adversaries, or dead girlfriends. Still, by acknowledging other narratives of the Spider-verse, this film borrows from their collective histories to help advance the current Peter.

It also doesn’t hurt that everyone involved puts in the work to make No Way Home a sensational spectacle. Darker than previous Spider-Man outings, Peter matures before our very eyes as the film places the young genius in upsetting situations that would shatter any other person, much less a teenage superhero with an image issue. Holland brings an emotional vulnerability to the role of Peter, while Zendaya’s MJ and Jacob Batalon’s Ned support their friend and the story in their own amenable way. Even Benedict Cumberbatch as Doctor Strange turns in an impassioned performance when he’s not delivering savage clapbacks.

But the real joy comes from watching former Spider-Men and Spidey foes alike back in the spotlight in what can only be described as a victory lap. Alfred Molina and Willem Dafoe continue to impress as Doc Ock and Green Goblin, but the film is also a redemption for Jamie Foxx as Max Dillon/Electro, Thomas Haden Church as Flint Marko/Sandman, and Rhys Ifans as Dr. Curt Connors/The Lizard, whose past turns were overshadowed by overcrowded outings.

Tobey Maguire and Andrew Garfield are a joyous addition to the film as they reflect on their own highs and lows, offering this Peter a helping hand in lieu of becoming a throwaway mention for mere fan service (looking at you, Matt Murdock). Watching all these characters from various parts of a shared pop culture past is not just evocative use of sentimentality, but thoroughly entertaining, a little heartbreaking, and often very, very funny.

The tale is not without fault. There are a few plot holes and inconsistencies that will no doubt be discussed and dissected on podcasts, vlogs, and nerdy think pieces galore. But it doesn’t distract from an emotional center previously unseen in past Spidey efforts.

In the end, what we are left with is a movie that pays homage to the past. Those Spider-Men walked so that MCU’s Spider-Man could run. The end result is a whole new origin story to a whole new Spider-Man, one steeped in tragedy and loss, but now geared to become a superhero to the likes audiences have never seen.