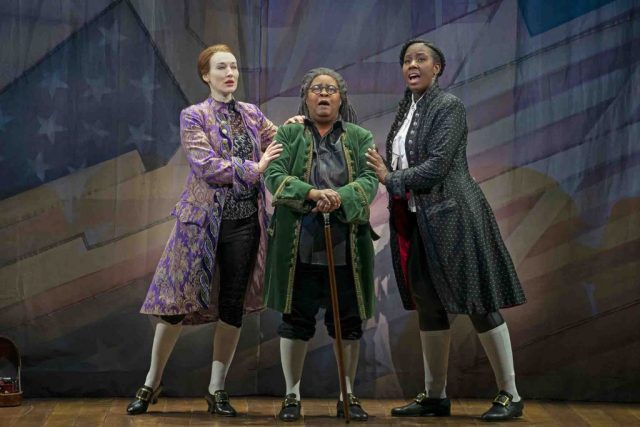 In their latest piece for the Village Voice, writer Michael Musto reviews the gender-switched 1776, a musical about the Declaration of Independence reimagined for the twenties. Based on the original 1969 musical of the same name by Peter Stone and Sherman Edwards, the production centers on the ratification of the Declaration of Independence in the face of some counterproductive politicians, with some pertinent lessons for today’s Congress.

“Thankfully, you realize right away that—as directed by Diane Paulus (Pippin, The Gershwins’ Porgy and Bess) and Jeffrey L. Page (who also choreographed)—this isn’t any dusty, reverential revival,” writes Musto. “As the press materials explain, ‘The cast includes multiple representations of race, ethnicity, and gender; they identify as female, transgender and nonbinary.’ In other words, it includes everyone who was left out of the Declaration of independence. That historical document states, ‘All men are created equal,’ but this production makes clear that the signers didn’t really mean it. And so, much like Hamilton, the revival is doing a switcheroo, shedding a light on oppressed groups by giving them center stage and letting them ‘wear the pants.’”