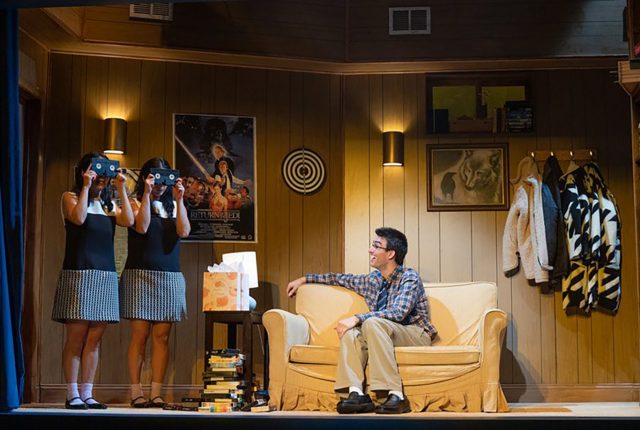 In their latest piece for the Village Voice, writer Rhoda Feng reviews the off-Broadway debut of peerless, a play by Jiehae Park that could be loosely defined as an adaption of Macbeth (though Feng argues that the term “adaption” doesn’t quite fit what this piece is).

“For a certain type of high achiever in thrall to perfect GPAs and hordes of extracurriculars, getting into an Ivy can feel as monumental as, say, ascending to the throne of a kingdom,” writes Feng. “In place of Macbeth and his scheming wife, we have M and L, two Asian American high schoolers played with spooky synchronicity by Sasha Diamond and Shannon Tyo, respectively. They’re identical twins, but academically separated by a year: M is on the cusp of graduation while L is a junior who chose to stay back a year to better her odds of being accepted into ‘The College,’ which has historically accepted only one early-decision student from their high school in ‘Nowheresville’ each year. (The College is never explicitly named, but the “Veritas” logo on acceptance envelopes is a huge crimson clue.) On paper, the sisters are “shoo-ins”: M has a 4.8 GPA , perfect SATs, and a roster of AP courses, and L is also comfortably ensconced in the top 10 of her year. To most people (including their teachers), they are indistinguishable: They wear matching black-and-white outfits in school and are only differentiated by the color of their hairbands and backpacks (costumes by Amanda Gladu), which they wear strapped to their backs like jet packs. The velocity of their words, if only there were a way of bottling their logorrhea, could easily propel them to outer space and back. Slowly, though, you get the sense that they’d have no scruples about shedding other things, like morals, along the way, as if they were trifling ballast.”