‘Tis the season. Can’t miss it. Can’t avoid it. You can try to secularize it in a generic way (“Happy holidays!”), recalibrate your festive winter solstice focus to Hanukkah or Kwanzaa, but it’s still Christmastime. And, as usual, popular culture is snowdrift deep in it. Regardless of our belief systems, most of us have favorite classic Christmas movies, television specials, music, and live performances. But December usually brings new entries into the Christmas pageant, and 2017 is no different.

This year’s Christmas movie offerings started off inauspiciously with a pair of lame, lowbrow comedy sequels: A Bad Moms Christmas — a less appealing and less amusing call-back to Bad Moms, 2016’s occasionally funny, not particularly inspired adventure in Bridesmaids-styled female-centric slapstick with Mila Kunis and Kristen Bell — and Daddy’s Home 2 — a Yuletide reunion of the idiot fathers from 2015’s Daddy’s Home, an exercise in tedium pitting Mark Wahlberg as a ne’r-do-well biological dad against Will Ferrell as a good-guy stepfather in a battle for the affections of the offspring. If you see either of the follow-ups, “yule” be sorry.

Then, there’s The Star, a mediocre, heavy-handed animated feature about the Nativity as seen though the eyes of the attending animals, particularly a brave little donkey. These creatures are present and somehow crucial to the first Christmas. Along with the standard gifts of the Magi, The Star provides a string of new, old, and sacred tunes interpreted by modern gospel artists — and Mariah Carey. Despite the polyglot “star” power in the voice cast (Oprah Winfrey, Kris Kristofferson, Tracy Morgan, Zachary Levi, Steven Yeun, Tyler Perry, Kristin Chenoweth, and Christopher Plummer are a few of the notables), the animation is second-tier, the humor is mostly sophomoric, and the holiness quotient is undercut by banality.

Not every Christmas movie can be a Miracle on 34th Street or a Holiday Inn. With such lackluster options, it’s especially gratifying to have The Man Who Invented Christmas in theaters as well. This sincere, beautifully art-directed feature is a dramatization of Les Standiford’s book that extrapolates the circumstances involved in the creation of British author Charles Dickens’s beloved tale A Christmas Carol. Screenwriter Susan Coyne (TV’s Slings and Arrows) and director Bharat Nalluri (Miss Pettigrew Lives for a Day) depict Dickens as tormented by childhood abuse, writer’s block, money problems, and the demands of trans-Atlantic literary fame due to the success of Oliver Twist. As we know, Dickens overcame whatever obstacles he faced to complete his story, and it would go on to define and encourage the kind and charitable virtues of the season and various customs of the holiday, as well as be retold umpteen times in various iterations and across multiple mediums. (A Muppet Christmas Carol, anyone?)

The casting is spot-on, starting with Dickens, who is portrayed by U.K. actor Dan Stevens, best known as the tortured mutant antihero on FX’s Legion sci-fi series and the tortured heir to the Grantham estate on ITV’s Downton Abbey. When called upon, Stevens can be dashing and charming, and he can be twisted up, making him an astute choice as Dickens, whether basking in his celebrity, hobnobbing with his peers in Victorian London, in conflict with his feckless father (Jonathan Pryce, in his element), or interacting with spectral embodiments of the characters he conjures. Miserly Ebenezer Scrooge, central figure of A Christmas Carol, is foremost among the imaginary companions bedeviling Dickens during his lower moments. Christopher Plummer is ideal in the role of Scrooge, and is used to better effect here than as the voice of King Herod in The Star. If you go to see one movie with Plummer during the holidays, make sure it’s The Man Who Invented Christmas.

Amid a seemingly endless stream of vapid and schmaltzy Christmas-themed TV movies that clog the Hallmark and Lifetime channels every December, we do have a few perennials on the air: the beloved cartoon special led by the ever-watchable feast of Peanuts characters, A Charlie Brown Christmas, Rudolph the Red-Nosed Reindeer, and How the Grinch Stole Christmas; marathon showings of the Depression-era family comedy from 1983, A Christmas Story; the annual presentation of Frank Capra’s sweetly sentimental 1946 tear-jerker It’s a Wonderful Life; and cable airings of other classics such as the 1951 English version of A Christmas Carol, starring Alistair Sim as Scrooge (which would definitely be worth watching after seeing The Man Who Invented Christmas).

So what’s new, other than a lot more Hallmark and Lifetime fodder such as My Christmas Prince, Snowed-Inn Christmas, and Magical Christmas Ornaments? There will be some Christmas episodes of ongoing series including Will & Grace, Family Guy, and Call the Midwife. Coinciding with the release of her frothy Christmas album, ex-punk/funk singer and recent TV music-competition judge Gwen Stefani has a variety special on NBC (Dec. 12, 9 p.m.). And how about a live musical version of A Christmas Story on Fox (Dec. 17, 7 p.m.), riding the coattails of the aforementioned movie? Slim pickings, but there are always the old movies, as well as classic reruns like the I Love Lucy Christmas Special on CBS (Dec. 22, 8 p.m.).

I could just put the Vince Guaraldi Trio’s lighter-than-air soft-jazz soundtrack to A Charlie Brown Christmas, the glorious orchestral soul-rock of A Christmas Gift for You from Phil Spector, or any number of timeless tracks by Bing Crosby, Elvis Presley, the Beach Boys, Stevie Wonder, Paul McCartney, U2, Mariah Carey, and so forth on repeat and be happy. But Santa has a slew of fresh Christmas albums in his sack. Besides Gwen Stefani’s You Make It Feel Like Christmas, (including a duet with significant other Blake Shelton, who has his own current Christmas disc, Cheers, It’s Christmas, in the marketplace), there are new releases from the vocal group Pentatonix (A Pentatonix Christmas Deluxe), neo-classical violinist Lindsey Stirling (Warmer in the Winter), rockers Cheap Trick (Christmas Christmas), art-pop singer-songwriter Sia (Everyday Is Christmas), grown-up boy band 98 Degrees (Let It Snow), soulful American Idol winner Fantasia (Christmas After Midnight), fraternal rock band Hanson (Finally It’s Christmas), pop-jazz icon Herb Alpert (The Christmas Wish), and — yee-haw-fa-la-la! — country group Alabama (American Christmas). And those are just a few berries on the mistletoe when you consider rereleases (Frank Sinatra’s Ultimate Christmas) and the latest multiartist compilations (This Is Christmas) now available. 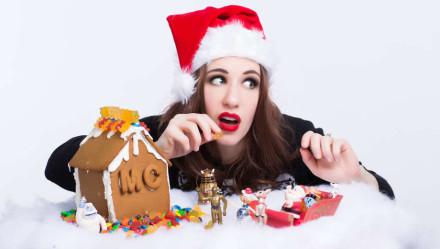 Sure, you’ll feel the joy if you attend the San Francisco Ballet’s evergreen presentation of The Nutcracker, with Helgi Tomasson’s elegant choreography to the magnificent music of Tchaikovsky (Dec.13–30, War Memorial Opera House, 301 Van Ness Avenue). And you can’t go wrong at ACT’s annual production of Charles Dickens’s A Christmas Carol, as adapted by Carey Perloff and Paul Walsh (Dec. 1–24, Geary Theater, 415 Geary Street). But allow me to recommend something delightfully different: Kat Robichaud’s A Very Merry Misfit Cabaret, the latest in the prodigiously talented singer-songwriter-impresario’s series of variety shows at the refurbished Great Star Theater in Chinatown, mixing musical theater, rock ’n’ roll and vaudeville (Dec. 15–30, Great Star Theater, 636 Jackson Street). Her most recent production, Horror Show, was a fun, funny, fantastical Halloween treat. Going by experience, Kat’s Christmas spectacular will be a theater-sized stocking stuffed with singing, dancing, and theatrical vignettes with burlesque, drag, and more — with music accompaniment from her accomplished band, the Darling Misfits. Kat promises to celebrate or lampoon every Christmas special from your childhood in campy, naughty, and delirious fashion. Believe it!