Just what the doc ordered

The beauty of the documentary is the wide range of subjects and points of view the format can accommodate, whether simply celebrating a life, showcasing a significant moment in time, or serving as a platform for investigative journalism. When well executed, a documentary can enlighten, inspire, or even move the viewer.

As astonishing true-life stories go, you would be hard-pressed to find one (let alone invent one) that’s more remarkable than the situation at the heart of Three Identical Strangers, skillfully directed by Tim Wardle. This is a slice of reality about identical triplets born in 1961 to an unwed mother, then split up at infancy and each adopted by a different family — one well-to-do, one middle-class, and one working-class. The boys grow up unaware of their status as triplets until the age of 19 when one of them learns of a doppelganger who attended the same college he’s attending. The reunion and two siblings’ eventual discovery of their third brother make for an uplifting tale. The revelation of their relationship results in a media frenzy with sensationalist newspaper and magazine articles and talk show appearances, and even business opportunities for these genial guys who are clearly delighted to have found one another — until facts about their adoption come to light. As mysteries are revealed and tragedy strikes, Three Identical Strangers becomes a dark and disturbing experience, but no less compelling. The broader ramifications of what the triplets learn and the palpable emotion generated by their journey make for one of the best movies of the year to date.

The King is a thought-provoking, impressionistic, and unconventional mix of biography, American history lesson, social commentary, cultural critique, and political tract that basically tells the story of rock ’n’ roll singer, actor, and icon Elvis Presley, one of the most famous people in the modern world, through an odyssey by filmmaker Eugene Jarecki in Presley’s own 1963 Rolls-Royce. The trip traces the path of the performer’s life from Tupelo to Memphis to Nashville to New York City to Hollywood to Las Vegas with a wide range of people, including celebrities, pundits, actors, singers, and ordinary folks getting into the car. There’s archival footage of significant Presley performances and newsreels, as well as interview bits with authors and experts (including renowned Bay Area pop-music critic Greil Marcus), members of Presley’s band and entourage, and a good cross-section of live music by some talented musicians. It’s as much about the promise and mirage of the American Dream as it is about Presley, with interesting ruminations about the idol and the country by actor Alec Baldwin, consultant James Carville, rapper Chuck D., newsman Dan Rather, and others. The cinematography along the way is beautiful, whether it’s gazing at the rural south or Beale Street or Hollywood or the Painted Desert. 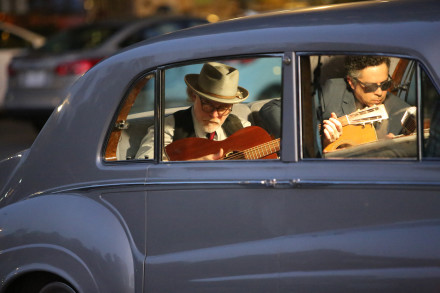 British clothing designer Alexander McQueen’s life was a veritable rags-to-rich-rags yarn that ended prematurely when he committed suicide in 2010 at the age of 40. He deserves to be remembered and honored for his talent and revolutionary artistic achievements in the face of personal demons, and McQueen does the job. It’s an audiovisual biography that takes an unflinching, collage-like approach to its subject with vintage clips of him from his earliest years to his final days, and on-camera recollections by his family, friends, and peers. In a unique move that resonates with the material, directors Peter Ettedgui and Ian Bonhôte use extensive video of McQueen’s most memorable fashion shows and events in chronological order as a framework for the movie. By doing so, they offer examples of his imaginative and rebellious designs while simultaneously depicting the progress and trials of a troubled kid with working-class roots as he served his apprenticeship, launched his own label, and made his way in a field that signifies luxury. His work was brave and impudent, defying a couture establishment that found it difficult to reconcile his increasingly bold strokes with more conventional high fashion — especially when he was named creative head at the traditionally elegant house of Givenchy. Despite its distressing finale, McQueen ingeniously illustrates the challenges, setbacks, and triumphs of a brilliant iconoclast.

Initially, it seems as if Generation Wealth will delve into the entitled, profligate, and destructive tendencies that have exploded around what the movie suggests is the richest society the world has ever seen — America, with its 1 percenters. We are shown brief depictions of people who embody the arrogance and heedlessness of the prosperous. In the end, the movie doesn’t go too far beyond these fleeting sketches other than following the descent of one willfully greedy businessman of questionable morals and covering filmmaker Lauren Greenfield as she glosses over her relatively comfortable upbringing in Southern California and prepares a coffee-table book of her unquestionably vivid photos that apparently inspired this movie. Despite the scattershot interviews of a number of wealthy folks in various locations around the world, the feature lacks a certain unity, coherence, or solid conclusion other than suggesting untrammeled avarice can corrupt and living beyond one’s means is a debilitating thing. The Queen of Versailles, the previous documentary that Greenfield directed, is a considerably better and more focused effort, and though its main characters show up for a few moments in Generation Wealth, their presence is nowhere near as effective and memorable the second time around. The climax of Generation Wealth is a launch party for Greenfield’s book, ostensibly the culmination of her pursuits, although the scene — in the wake of the rambling portrait(s) of affluence that precede it — leaves a moviegoer with the sense of having watched an infomercial.