Your Name
by Michael Snyder

I remember when 2D cartoons and various sorts of stop-motion animation were considered niche or kiddie fare. Even the word “cartoon” suggests something frivolous and trivial. Not that I ever let that diminish my interest in ‘toons. But animation has become an integral and more respected part of the cultural landscape, with billion-dollar movie industry revenues and prime-time TV exposure that’s aimed at fans of all ages.

Anyone who saw and enjoyed the 2016 Oscar-winning feature Zootopia — the anthropomorphic-animal noir with its whimsically designed computer-generated characters, fluid action, glorious color palette, sharp gags, and message of inclusion — knows the level of quality being attained by a host of studios. Pixar, Disney, Dreamworks, and various smaller production companies have raised the game, and there are more notable projects to come on the big and small screens. Those gems include this month’s U.S. release of the biggest box-office success in the history of Japanese animated movies, Your Name, which is probably the best animated movie from Japan since the enchanting, critically acclaimed Spirited Away; and the April 5 return of the scathingly funny FX channel spy-fi sitcom Archer, this time in faux film noir guise.

I’m definitely anticipating the update of a personal favorite, DuckTales, the ongoing series about the escapades and explorations of wealthy comic-book fowl Scrooge McDuck (now voiced by the accomplished Scottish actor David Tennant), hot-headed Donald Duck, and Donald’s resourceful nephews Huey, Dewey, and Louie, scheduled to start this summer on the Disney XD channel. The 3D cash-grab sequel Smurfs: The Lost Village also shows up at movie houses this month, with two other sequels, Cars 3 and Despicable Me 3, following in June. None of those three are expected to be the kind of animated ground-breakers, risk-takers, or masterpieces that deserve golden statues.

A TASTY AND PUNGENT ‘ZUCCHINI’

If you haven’t caught up to Zootopia or its fellow 2016 Academy Award nominees (including the musical Pacific Ocean-going quest Moana; the hero’s journey Kubo and the Two Strings; and the spare, gentle desert-island fable The Red Turtle), they are worth your time. And I’d like to particularly recommend the Swiss-French stop-motion animated feature My Life As a Zucchini, which launched its official U.S. theatrical engagement a few weeks ago, delighting me, even as it targeted my tear ducts. For the record, the actual title in French is Ma Vie de Courgette. Courgette is the boy’s nickname, which translates into English as Zucchini, the latter somehow sounding sillier. 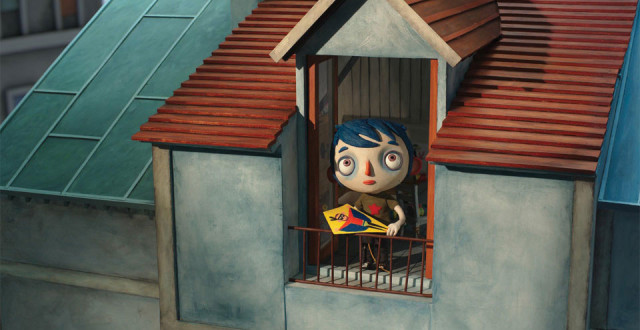 My Life as a Zucchini

Vegetable designation aside, it’s the tender tale of a boy who is orphaned in tragic fashion and is brought to a foster home that’s run by a decent, caring crew of adults. Although he’s well-treated, he struggles with loss and the need to fit in with the other kids in the home, all of whom are dreaming of adoption. Addressing real-world problems with honesty and wit, it is equal parts lovely and sad and hopeful. And yes, I wept a bit by the end of the movie. I give it three tears on the Snyder Cry-o-meter. Despite looking like it was designed to be primarily viewed by children, it is much more.

As you might suspect, I grew up watching afternoon TV shows that featured classic Popeye shorts from Fleischer Studios and scores of Warner Brothers ‘toons “starring” Bugs Bunny, Daffy Duck, Porky Pig and the Merrie Melodies gang, all originally meant for theatrical release as cinematic hors d’oeuvres before whatever feature film was running at the local movie house. In the 1930s and ’40s, when the bulk of those vintage cartoons were created, they were considered cross-generational entertainment. But, by their television airings in the late ’50s and ’60s, they were branded as kids’ stuff. That would fly in the face of the occasionally sophisticated jokes in play, especially in the made-for-TV material that was produced by the team of Jay Ward and Bill Scott in the ’60s.

My sense of humor, such as it is, was forged in part by the WB gags and Ward and Scott’s smart, satirical, and droll (but crudely rendered) Rocky and Bullwinkle adventures. The latter programs — rough, riotous, and always ready to puncture pomposity — tend to hold up today, perhaps due to the current global ascent of so many power-abusing reactionary politicians. The ’60s also brought us Hanna-Barbera’s primetime offerings, starting with The Flintstones. This jovial depiction of a “modern Stone Age family,” initially inspired by the ’50s domestic sit-com The Honeymooners, took aim at adult viewers via broad social commentary. H-B followed The Flintstones with The Jetsons, a futuristic take on middle-class American suburban life. Both have endured in various iterations, and are spiritual and thematic precursors to those ongoing FOX-TV staples The Simpsons, Family Guy, and Bob’s Burgers, and American Dad on TBS.

Derision toward animation is old, stale news. Still, the idea of juvenilia or bland, family-oriented diversion is sometimes implied when animated narratives are discussed in certain pretentious circles. I know of one critic who just doesn’t like animation, even though he praised the recent King Kong reboot Kong: Skull Island, which, to be fair, might be as much as 75 percent or more computer-generated imagery — in other words, a big ol’ cartoon.

An antidote to the market-driven Smurfs, Cars, and Despicable Me sequels and the presumably crass, blatant hack-work of (brace yourself) The Emoji Movie, due in August, Your Name hits the U.S. in various cities on April 7 after a brief Oscar-qualifying run at the end of last year. My assumption is that no Academy voters actually saw Your Name at that time, or it would have gotten a nomination. Directed by Makoto Shinkai in high-end 2D animation with digital flourishes, it’s as moving in its way as My Life As a Zucchini, though it has much grander aspirations than simply depicting a slice of life.

From the get-go, Your Name mixes genres — science-fiction, fantasy, adventure, comedy, drama, and coming-of-age — in fresh and unexpected ways. A wish by a teenage girl in a rural area triggers a body swap between her and a teenage boy who lives in a city many miles away. Initially puzzled, frightened, and intrigued, they decide to find one another while they deal with intermittent swapping back and forth, unexpected time shifts, and a celestial event. So Your Name additionally involves a quest and the very timely topic of gender exploration. For all of the elements at play here, it fits together in beautiful, mesmerizing fashion. You’ll be able to see it in the original Japanese with English subtitles (preferable) or dubbed in English — and you should. If anything confirms the potency and relevance of contemporary animation, it’s Your Name.

Tweet
Send to a Friend Print
Michael Snyder is a print and broadcast journalist who covers pop culture on KPFK/Pacifica Radio's "David Feldman Show" and on "Michael Snyder's Culture Blast," via GABnet.net, Roku, and YouTube. You can follow Michael on Twitter: @cultureblaster