A terrifying top 10 for Halloween

The Exorcist
by Michael Snyder

With Halloween shambling toward us, October is an ideal time for movie-lovers to seek cinematic encounters of the frightening kind, whether supernatural or science-fictional.

Let me be frank about this — or, better yet, let me be Dr. Frankenstein, and build you a monstrous selection of classic horror films that you and your ghoulfriends can watch in the comfort of your own home entertainment room … or dungeon. I’ve put together a Terrifying Top 10, any one of which will bring chills around the witching hour on a late October night. They’ll also work quite well as Halloween party entertainment or as a diversion when you’re waiting for trick-or-treaters to ring your doorbell on All Hallow’s Eve.

In making my selections, I decided to avoid anything done in a foreign tongue (so no pesky subtitles); shunned most of the usual horror franchises (sorry, Freddy and Jason); tried to keep gobs of gore to a minimum (as in chainsaw massacres); eschewed found-footage horror; and said, “Go suck it, vampires!” (The wimpy Twilight films and the wacky True Blood TV series have pretty much defanged vamps in my mind.)

So without further ado, in alphabetical order, here we go:

Essentially, Alien is a haunted-house tale set in outer space. This mega-tense science-fiction corker unleashes a slimy, vicious, elusive extraterrestrial biohazard with teeth against a crew from Earth in a creaking, dimly lit, rust bucket of a space ship. Tough gal Sigourney Weaver, crusty Harry Dean Stanton, and the ever-versatile John Hurt are standouts in a fine cast, while the creature, designed by fantasy artist H. R. Giger, and the various sets were beyond influential for much of the sci-fi that followed.

Truly a quintessential monster movie, this continues the immortal tale told in Mary Shelley’s Gothic novel Frankenstein (and the eponymous film it spawned) about what can happen when man tries to play god. In this case, a scientist wants to animate a body comprised of parts of various corpses then build a mate for the creature. Starring Boris Karloff as the monster and Elsa Lancaster as the bride, it features some of the most iconic scenes and art direction in Hollywood history — and surely was the core inspiration for Mel Brooks’s hilarious homage/parody Young Frankenstein. 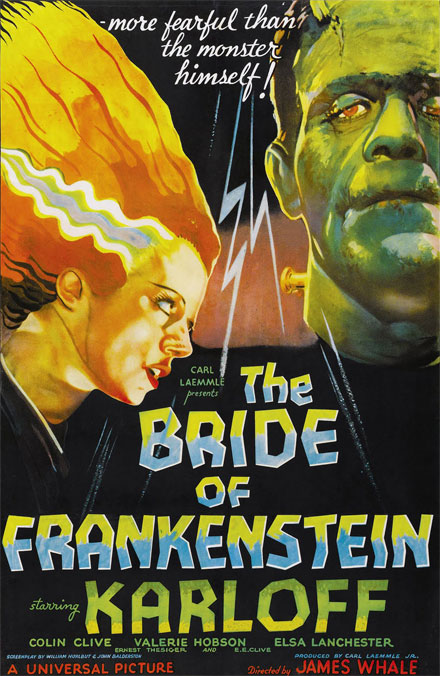 Curse of the Demon (1957),
directed by Jacques Tourneur

Sometimes it’s what you don’t see that frightens you the most. In the case of Curse of the Demon, the forces of evil lurk in the shadows, but an escalating sense of dread is inescapable. Dana Andrews plays an American psychologist visiting London to reveal the leader of a devil-worship cult as a fraud. When the cult leader attempts to curse the psychologist, the film becomes a case of who’s cursing whom. The atmosphere is unsettling throughout — and the accompanying anxiety is brutal.

The Exorcist (1973),
directed by William Friedkin

A priest who doubts his faith must save a young girl from what appears to be demonic possession in this adaptation of William Peter Blatty’s best seller. With its deeply resonant religious imagery, its innovative, precomputer-animated practical effects, its award-winning sound design, and a stunningly precocious performance by then-pubescent actress Linda Blair, it can still get the skin crawling and the stomach churning — 40 years after its release.

The Haunting (1963),
directed by Robert Wise

How amazing that the director of The Sound of Music (a high watermark in saccharine, family-friendly big-screen musicals) helmed this near-perfect predecessor to the likes of The Amityville Horror, Poltergeist, and even the Insidious features of recent vintage. Based on Shirley Jackson’s novel The Haunting of Hill House, this extremely effective flick focuses on a ghost hunter who, accompanied by a skeptic, a clairvoyant and a timid psychic, investigates an old mansion with a history of violence. Otherworldly chaos ensues.

Invasion of the Body Snatchers (1956),
directed by Don Siegel

A model of 1950s Cold-War paranoia in sci-fi form, this fear-fraught film shows what happens when an alien force begins replacing normal people in a small town with emotionless duplicates. Those who have yet to be changed are targeted by the body-snatched who look exactly like their family, friends and neighbors, but have a sinister agenda. A local doctor knows the awful truth, but can he escape assimilation/duplication? The fine 1978 remake with the same title is also worth catching.

Night of the Living Dead (1968),
directed by George A. Romero

The granddaddy of zombie apocalypse movies was also the first full-length effort from a young George Romero who went on to be recognized as one of the groundbreaking horrormeisters in the business. Made on a shoestring in black-and-white and utilizing a small cast of fledgling actors in an intimate milieu, the original Night of the Living Dead is still scarier than most of the zombie films that followed in its wake. A renowned siege sequence, with the uninfected trying to save themselves from the undead onslaught, has been imitated repeatedly. This is where it all began.

Anointed the master of suspense after years of success in Hollywood, Hitchcock put his rep on the line by making this low-budget, now-archetypal horror film about a disturbed young man with some unpleasant obsessions and a very creepy secret. Psycho, which gave Anthony Perkins a career-defining role as the twisted Norman Bates, is another case where so many scenes and situations have become so essential to the language of genre filmmaking that they come off in retrospect as clichés. Yet, they’re the real deal — and as shocking today as when they first rattled audiences in 1960.

Say what you will about Roman Polanski, but he’s a hell of a director — and one of his greatest works is this hellish tale based on Ira Levin’s blood-curdling book about a very, very difficult pregnancy. Mia Farrow and John Cassavetes portray a young husband and wife who move into a posh Manhattan apartment building. When she unexpectedly gets pregnant, her husband and her new neighbors are extremely excited about the impending birth, but she’s worried. Needless to say, no Lamaze class could possibly prepare Rosemary for what’s about to happen to her.

The Thing (1982),
directed by John Carpenter

Here’s a case where a remake of a classic is as good in its own way as the first version. One of my favorite science-fiction films is the 1951 thriller The Thing from Another World, inspired by the short story, Who Goes There? The plot involves a discovery at a remote Arctic research station that endangers everyone there, and potentially threatens the rest of the world. The 1982 update, starring Kurt Russell as a helicopter pilot at an Antarctic outpost, uses latter-day special effects to bring an extra dimension to the title antagonist, ratcheting up the tension to the white-knuckle level.

Tweet
Send to a Friend Print
Michael Snyder is a print and broadcast journalist who covers pop culture every week on KPFK/Pacifica Radio's David Feldman Show, and on Michael Snyder's Culture Blast, available online at YouTube and Digidev TV. You can follow Michael on Twitter: @cultureblaster