Corned beef and cabbage and green beer for Saint Paddy’s Day? Not so much in Ireland …

Nothing pairs better with green beer than corned beef and cabbage. Photo: bhofack2
by Julie Mitchell

San Francisco has a large Irish-American community, so large in fact, that its annual Saint Patrick’s Day parade and festival at City Hall is the West Coast’s largest Irish celebration of Irish customs and culture. And Irish pubs and bars all over the Bay Area overflow with green beer, shamrocks, and hearty meals of corned beef and cabbage. But the fact is, in Ireland while Saint Patrick’s Day is a national holiday with one million participants throughout the country, you’ll most likely find lamb or bacon on the menu. It was only in 1970 that pubs were open on March 17; Saint Paddy’s was originally observed as a religious and family holiday.

WHO WAS SAINT PATRICK?

Patrick was believed to have been born in what is now Scotland in the latter half of the 4th century to a wealthy family. He was kidnapped at 16 and taken to Ireland and sold into slavery. While working as a herdsman of sheep and pigs in Ireland, Patrick became increasingly religious. Although he was able to escape to Scotland, there he had a dream that God was calling him back to Ireland as a priest to convert those living there, mostly Celtic druids or pagans, to Christianity. He led a life full of controversy and several periods of imprisonment while traveling and converting people and establishing monasteries, churches, and schools for 20 years until his death on March 17. This day became first a day of remembrance by Saint Patrick’s followers and then a feast day and a religious holiday after Pope Urban VIII added it to the church calendar in 1661. Saint Patrick is widely known as the patron saint of Ireland. 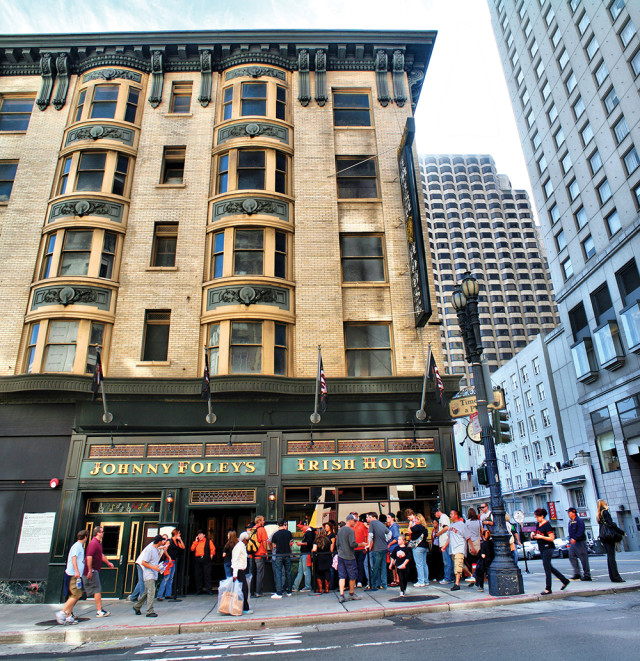 WHY GREEN; WHY SHAMROCKS?

One of the most obvious reasons Ireland is known as the Emerald Isle is its climate preserves the brilliant natural green of its lush vegetation. But the flag of Ireland — first in the banner of the Lordship Ireland from 1177 to 1541 — was originally royal blue. By the 1600s, the use of the green harp flag by the Irish Catholic Federation is what associated the color with Ireland. According to the Irish government, the green on the flag symbolizes the Gaelic political and social order, or the Catholic side, and the orange symbolizes the followers of William the Orange, or the protestant side of Ireland. The white band in between symbolizes unity between the two. Saint Patrick was said to have used the shamrock or three-sided clover, to explain the holy trinity to pagans; thus it became popular to wear green clothing and shamrocks to celebrate Saint Patrick’s Day.

In Ireland’s early days, cattle were not used for meat but for milk and other dairy products, and in Gaelic Ireland, cows were a symbol of wealth and were sacred animals. They were only killed when they were old or unable to produce milk. So only the wealthy were able to eat beef on a festival or celebration day. The beef was salted so it could be preserved, but the Irish ate mostly pork, as pigs were the most available meat in Ireland.

The English, who had always been a beef-eating nation, conquered Ireland in the 1500s, and exported tens of thousands of cattle to England from Ireland. Then, in the 1600s, the Cattle Acts prohibited the export of live cattle which led to the popularity of salted beef. The British invented the term “corned beef” because the size of the salt crystals used to cure the meat were the size of corn kernels. Soon Ireland was supplying Europe and the Americas with corned, salty beef.

Irish immigrants who settled in New York ate lots of corned beef with meat bought mostly from kosher butchers because the Irish and the Jews tended to live in the same neighborhoods. The corned beef was made from brisket, and with slow cooking and spices, the meat was transformed into the tender, flavorful dish we enjoy today. Irish Americans eventually began to commemorate Saint Patrick’s Day as a celebration of their heritage and homeland. Along with corned beef, they added the familiar potatoes and the most affordable vegetable at the time: cabbage.

WHERE TO FIND CORNED BEEF AND CABBAGE

Irish bars and pubs all over the Bay Area will have corned beef and cabbage and other Irish fare on their menus for St. Patrick’s Day. Here are just a few of your best bets: