Valentine's Day is one of the sweetest holidays. PHOTO: Recchiuti Confections
by Julie Mitchell

What are you hoping to get from your sweetie on Valentine’s Day: roses, jewelry, or dinner at a romantic restaurant? Certainly, chocolate. In the weeks leading up to Valentine’s Day, Americans will spend more than $1.5 billion on approximately 58 billion pounds of chocolate. Many of us have our hearts set on a big, heart-shaped box of chocolates. And there are plenty of high-quality, local chocolatiers from which to select the perfect Valentine assortment. But really: Why chocolate? And who the heck was St. Valentine anyway?

While we associate chocolate with nuggets, truffles, and bars, chocolate originated in Mesoamerica (Central and South America) as a bitter beverage made from the pods of the cacao tree. Archaeologists found trace amounts of cacao powder in ancient Olmec bowls and jars in tombs near Guatemala as early as 1400 BC. Pueblo people imported cacao to the Mayans in the late 1900s. Historians believe that Mayans used chocolate drinks in religious ceremonies as well as feasts and festivals. Cacao beans were used as currency, and they were also used in marriage ceremonies; cacao was thought to be an aphrodisiac.

According to legend, either the Spanish conquistador Hernan Cortes bought cacao beans with him back to Spain in the 1400s, or Christopher Columbus brought the beans back in the 1500s. Originally used as a medicinal drink in Spain, other countries such as Italy and France began to sweeten cacao beverages with honey or sugar, and suddenly hot chocolate was all the rage across Europe.

In the 1800s, Dutch chemist Coenraad Johannes added alkaline salts to chocolate and then created a press that removed half the natural fat from roasted cacao beans to make cacao powder known as Dutch chocolate. Englishman Joseph Fry made solid chocolate by mixing a paste of sugar, chocolate liquor, and cacao butter. Other chocolate makers including Lindt, Nestle, and Cadbury continued to refine chocolate, and in 1893, Milton S. Hershey began to produce chocolate-covered caramels and later, its famous chocolate kisses in America.

The history of Valentine’s Day is a bit murky. The name is attributed to a Roman temple priest named Valentine, who was beheaded on Feb. 14 for helping Roman soldiers wed during a time when Emperor Claudius II had forbidden Christian marriages. One legend contends before his death, while imprisoned, he fell in love with the jailor’s daughter, and sent her a letter signed, “From your Valentine.” By the middle ages, Valentine’s Day was celebrated in February to commemorate his death and perhaps to Christianize a pagan ceremony called Lupercalia. Mid-February was also linked to the beginning of birds’ mating season and thus its link to love and romance.

U.K.-based Cadbury is credited with designing the first heart-shaped candy box during the Victorian era so when all the chocolates were eaten, the boxes could then be used to save handwritten love notes associated with Valentine’s Day. The candy boxes became more and more elaborate, featuring lace, flowers, satin, and bows. By the late 1800s, American chocolate companies began packaging their sweets in heart-shaped boxes for Valentine’s Day. Some say chocolate, once again, is an aphrodisiac, hence its popularity on this day.

San Francisco is a city of chocolate lovers, and if you’re searching for a special Valentine’s Day gift, you don’t have to go very far. Located in Cow Hollow, Ginger Elizabeth Chocolates is a female-run company that crafts fanciful, luxurious bonbons, macarons, chocolate bars, and hot chocolate. Bonbon flavors range from buttermilk-lime and bergamot-pale ale to peanut butter-graham cracker, and chocolate bars are studded with dried fruit, nuts, toffee, or cookie crumbles. All of its ingredients are sourced from fair-trade producers and are mostly organic. For Valentine’s Day, Ginger Elizabeth offers a 12-piece heart-shaped chocolate box filled with a variety of bonbons for $30 and an “Entremet” red velvet cake with chocolate crémeux, cream cheese frosting, and crème fraîche stracciatella mousse for $45 (3108 Fillmore Street, 415-671-7113, gingerelizabeth.com). 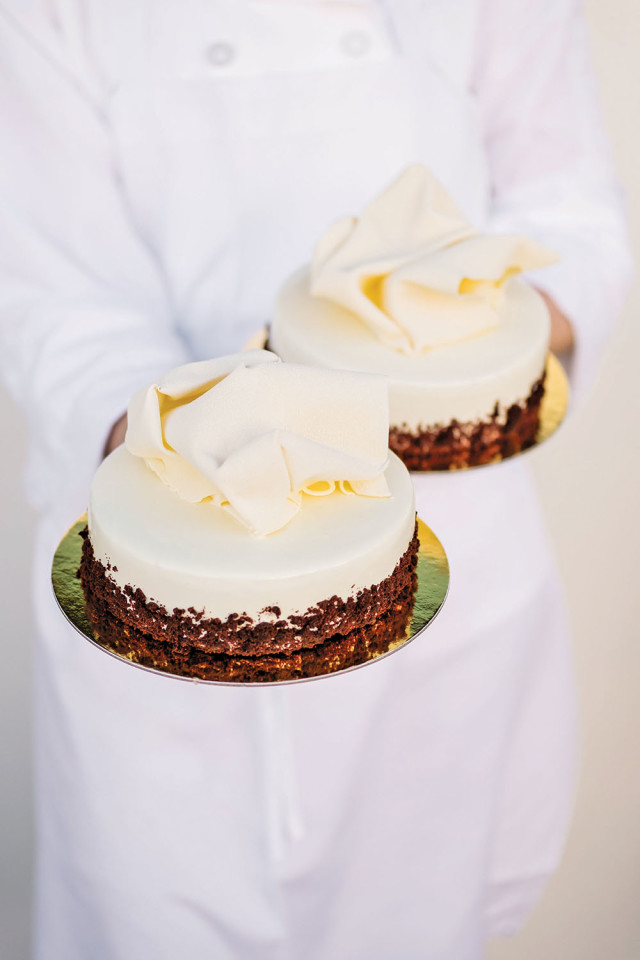 The Ferry Building boasts two of the city’s favorite chocolate purveyors: Recchiuti Confections and Dandelion Chocolate. Recchiuti specializes in delicately decorated and elaborately flavored single-origin chocolates, often infused with herbs like lavender and lemon verbena. Handmade truffle boxes are available for Valentine’s Day, as well as boxes that include collections of chocolate bars meant to enjoy with red wine or whiskey. A “love letters” truffle box with nine burnt-caramel truffles with semisweet chocolate, decorated with a love theme is $28 (One Ferry Building, Shop #30, 415-834-9494, recchiuti.com).

Dandelion Chocolates, founded in the Mission, has become one of the Bay Area’s best-known makers of craft chocolate. With a second location in the Ferry Building, Dandelion uses only cocoa beans and organic cane sugar to makes its chocolate bars. While known for its variety of bars crafted from beans from around the world, Dandelion also makes treats like chocolate-covered almonds, black sesame toffee brittle, and hot chocolate mix. A wrapped gift set of three Dandelion chocolate bars is $30 (One Ferry Building, 415-349-0942, dandelionchocolate.com).

Heart-shaped or not, a delectable box of chocolates for your Valentine is easy to find. And for those who love convenience, gifts are all available online, but a visit to a store is much more fun.