The copyboy: How an ex-Marine got his start running books

Many years ago, when I was fresh and tender, but a bit prickly like a young artichoke, I was a copyboy for the San Francisco Chronicle. Today, more than 50 years later, a bit tough and woody, I still miss those copyboy days.

One fine June morning, a Sunday in 1951, I received a bachelor’s degree in English from Stanford at a ceremony on the Palo Alto campus. The next morning I reported for work as a copyboy for the Chronicle at Fifth and Mission streets in San Francisco. In the large, second floor city room as it was called — a jumble of battered desks, jangling telephones, gray cigarette smoke hanging in the stale air — I was turned over to a veteran copyboy with a history degree from Harvard. He taught me how to make “books” for the reporters. Books were long sheets of copy paper into which were folded sheets of letter-sized copy paper, alternated with carbon tissues. They formed a kind of paper sandwich. Copyboys folded and stacked the books, and later the reporters rolled them into beat-up, clacking Royal manual typewriters and hammered out the news of the day. The books provided multiple finger-smudged carbon copies. Making those books was the default task for the eight or so copyboys usually on duty during daytime working hours. At night, fewer copyboys, and fewer bookmakers.

The principal copyboy chore — the very essence of copyboy-ism — consisted of pacing between two rows of desks waiting for a reporter to yank a book from his typewriter, dangle it out into the aisle and yell loudly, “Boy!” When that happened, as it did every few minutes before the first edition deadline, the copyboy ran to the impatient reporter, snatched the book, and ran (yes, ran) to the front of the large room, where he slapped it down on the city desk in front of city editor, Abe Mellinkoff and day editor, Carl Latham. They sat imperiously, side by side, in a vacuum of calm and order surrounded by a vortex of confusion.

Mellinkoff, short, dark, intense, and Latham, large, beefy and avuncular, quickly edited the copy with thick, black number two pencils, and then shuffled it off to another copyboy who rushed it several steps over to the half circle copy desk where the copy chief sat in the slot, literally a slot in the large, half circle desk. There it was dropped into a wire tray and then retrieved for further scrutiny by the copy chief, in my time a hard-nosed, patrician named Jim Benet. His father had been the noted poet William Rose Benet, which gave copy chief Benet a certain cache among his subordinate, hard-nosed copy editors. James Walker Benet had a fierce, proud aura that stemmed from his younger days when he joined the Abraham Lincoln Brigade and saw duty in Spain’s Civil War. He was a Chronicle hero.

Recalling Mellinkoff, Latham, Benet, and others in the Chronicle city room reminds me of a conundrum, a mystery that I still think about these many years later. All the editors of the Chronicle at that time had an impenetrable inner composure that we copyboys never seemed able to crack. They were like oysters that extruded a pearl to keep copyboys from getting to the isolated grain of sand within their shells. Call it the how-to-do-it grain of sand. The veteran newsmen I talk about here had a kind of private clubbiness — polite but aloof. You were either on the inside like the editors and the reporters, or you were on the outside, simply copyboys. We were treated with courtesy, but we were not taught the elusive craft of daily newspaper journalism. This was not J-school. What we were able to learn on the job, we picked up by osmosis.

Other important copyboy chores consisted of running into the adjacent composing room (where batteries of linotype machines clattered) to find galley proof printouts of stories that we then rushed back to the copy desk for yet another look for headline writing and the infrequent assigning of a byline to a reporter who had done a good job. (Reporters never wrote headlines, nor added a byline to their stories.)

Seemingly equal in importance was running to nearby restaurants like Polo’s or Original Joe’s, across Market Street, to get burgers on sourdough for the reporters. That of itself

was a harrowing exercise. Words like rare, medium rare, medium, well-done, raw onion, grilled onions, no onions — all involved careful note-taking or there was hell to pay when you got back to the city room.

Copyboys did everything on the run like recruits in Marine Corps boot camp. And the resemblance to boot camp was not accidental. In those days, the editor-in-chief of the Chronicle was Paul C. Smith, who had a distinguished ca-reer as a marine during World War II. He had become editor of the paper in 1935. When the United States entered World War II, high-profile Smith received a commission as a Navy lieutenant commander and the top brass shipped him off to Washington. He endured for a few months then resigned the commission and enlisted in the Marine Corps as a private. He was later recommissioned as a U.S. Marine second lieutenant, saw combat in the Pacific, and was awarded the Silver Star. When he returned to the Chronicle at war’s end, he loaded the paper’s editorial staff with former marines. I was one of those, though a bit later in the peacetime Marine Corps.

Occasionally (not often), copyboys were allowed to insert a book into the rubber roller of an unused Royal, and struggle to write an obituary or to rewrite a handout about an upcoming Chamber of Commerce or Rotary Club luncheon speaker. No one told you how to write the story of the event or how much to write about it. If your story made the paper, you were overjoyed. If it didn’t, no one told you why it was spiked — the word for purgatory from which stories almost never made it to the glories of newspaper heaven.

As a copyboy, if you didn’t make reporter in about six months, you could forget about it. Your career in journalism — at least with the Chronicle — was about to be concluded. I don’t recall that copyboys were ever fired. They just drifted off when they realized they weren’t going to become a reporter.

And that was the life of a copyboy. Oddly, I loved it. We were indeed all boys or young men then, most of us former marines, all college graduates. (There had been copygirls during World War II, but none by the time I worked for the paper.)

As I recall, copyboy work schedules were 8 a.m. to 4 p.m., 4 p.m. to midnight, and midnight to 8 a.m. If you worked a night shift, you sometimes were allowed to answer the telephone at an empty desk near the night city editor.

People telephone newspapers at all hours and for all kinds of reasons. Some call with what they believe to be hot news tips. Others ask about the next day’s weather. Many call in with all kinds of questions, out of curiosity or to settle bets or arguments.

One night when I was on duty, the telephone rang, and I picked it up and said, “Chronicle city room,” with a rising inflection to signify professional alertness.

“What was Joe DiMaggio’s lifetime batting average?” the caller asked. Not an avid baseball fan, that was a difficult question for me.

“Call in tomorrow morning and ask for the sports department,” I responded.

Later that same night I answered another call. This time a wobbly voice said, “Hey, we’re having a little discussion over here.” (“Here” sounded like a bar.) “Who wrote that story about the jumping frog?”

Suddenly everything be-came clear: Those countless hours as an English major. All that reading of everything from Ben Jonson to Ernest Hemingway. All those term papers. And now, all these hours making books, getting burgers for

the reporters and running copy up

to the city desk. Here I was, clearly utilizing my expensive education.

I did finally become a reporter, but that’s another back story. 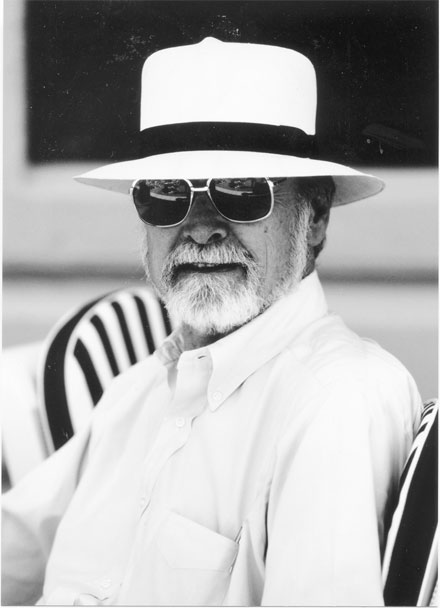