From burgers to kale: Plant-based Wildseed takes over Belga space on Union Street

Some of the dishes available at Wildseed.  Photo: Aubrie Pick
by Julie Mitchell

Restaurateur Adriano Paganini definitely has the Midas touch when it comes to successfully opening and maintaining an expanding line of diverse, popular restaurants in a city where even hot new spots seem to have a limited shelf life. Paganini’s restaurant group, Back of the House, is the force behind several of San Francisco’s favorite neighborhood eateries: A Mano in Hayes Valley, Barvale on Divisadero Street; Lolinda in the Mission; Super Duper Burger in several locations; The Bird in SOMA; Delarosa on Chestnut Street; Flores on Union Street, and several others.

Now, Paganini and his team have transformed Belga, his well-liked Belgian beer and sausage restaurant on Union Street, into a 100 percent plant-based destination called Wildseed. After opening in mid-September, Wildseed has been jammed every night.

Say what? From Belgian sausages to mushroom burgers? Paganini is nothing if not prescient, identifying and taking advantage of food trends. And the current movement toward eating a more plant-based diet is a particular passion of Paganini’s.

“Most restaurants in San Francisco serve meat, and that’s not a problem for me,” says Paganini. “But I personally have been trying to eat more vegetables. I grew up in Italy, so I basically follow a Mediterranean diet that focuses more on greens and grains than on meat or fish. I’m not advocating that everyone try it. But in creating Wildseed, which I have been working on for years, I wanted to offer people a place where they can come and eat beautiful, healthful, plant-based food that not only delights but satisfies them.”

When asked about Little Gem that opened recently just down the street from Wildseed and has a mostly vegetarian and 100 percent gluten-free menu, Paganini said, “Wildseed is the first plant-based restaurant of full size and scale; we have a full bar and expect a bar scene every night.” Wildseed’s generous bar and its creative cocktail menus are also driven by Paganini’s philosophy of using fresh, sustainable, and seasonable ingredients. All of its wines are local, organic, biodynamic, and vegan.

Paganini is proud of the team he has assembled to run Wildseed. Executive chef Blair Warsham brings a true omnivore’s palate to the party. A veteran of several Michelin-starred restaurants, including The Restaurant at Meadowood in Napa, Warsham has concocted a menu that is as vibrant and colorful as it is fresh. Substituting the plant-based Beyond Spicy Italian sausage for pork sausage was a revelation for him, and he is enjoying experimenting with other vegetable dishes without sacrificing flavor or satisfaction. 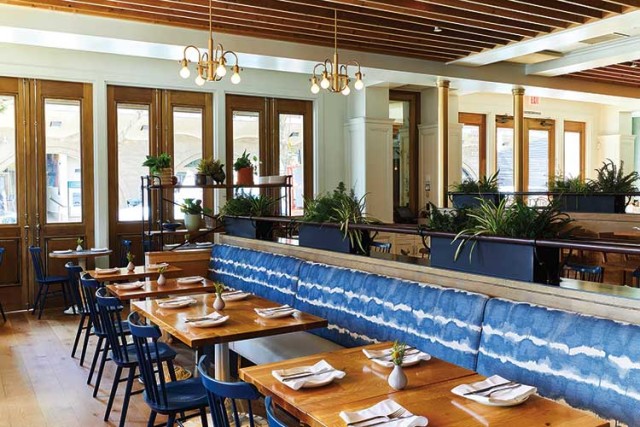 Other team members are Lauren Fitzgerald, assistant manager and bar manager, a graduate of the California Culinary Academy; and owner Debora Blum, Paganini’s longtime business partner and the founder of Goatlandia, a nonprofit farm animal sanctuary and educational center in Santa Rosa. Fitzgerald and Blum are both vegans.

Back of the House turned to designer Hannah Collins of Roy, a San Francisco-based, hospitality design studio to transform the space that features turquoise-blue back bar tile, an abundance of plants, and gold-and-brass accents highlighted by a mixture of wood tones and a clean white palette to give Wildseed an updated, modern look.

Of course, the real news here is the food. When I visited recently, the menu opened to a list of local, organic produce in season. Broken down into sections like snacks, to share, salads, bowls, sides, plates, and the sweet stuff, Wildseed makes sharing dishes a fun, palate-pleasing experience.

The menu changes seasonally, and currently, snacks include nibbles like harissa-spiked vegetable chips with a sour cream and onion dip, marinated olives, and shishito peppers with celery and preserved lemon dip, all priced $5–$6.

Shared plates range from beet and orange pâté with grilled sourdough, sherry pickled onions; and ceviche of king trumpet mushrooms with tiger’s milk, avocado, mango, and seeded chips. My friend and I shared the Mexican corn cakes with cherry tomatoes, grilled corn, lime, and queso, and not only were they delightfully sweet and tender, but had we been blindfolded and told the queso was actually cheese, we would have totally agreed. Shared plates are $8–$19.

Plates offer a warming spicy yellow curry with ginger, turmeric, Thai basil, root vegetables, and forbidden rice; a rigatoni Bolognese with ground Impossible sausage, spinach, and parmesan. Plates range $15–$17, excluding a super grain paella for two at $26. Desserts are $8 and include a Meyer lemon agave cheesecake with a gluten-free graham-cracker crust and coconut whipped cream, and a warm chocolate cake made from beets and chaga mushrooms served with vegan chocolate gelato.

Maybe all of this plant-based cheese, coconut bacon, and other vegan items have you wondering if this stuff actually tastes good. Well, sometimes it doesn’t. But at Wildseed you can be assured of an affordable plant-based gourmet meal that’s healthful and absolutely delicious.